Israel army chief says cooperation with US against Iran ‘unprecedented’ 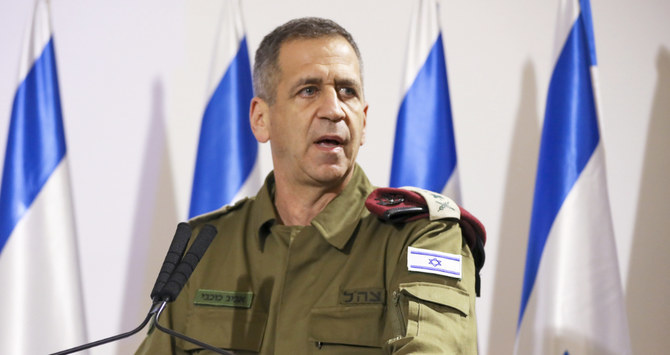 Israel’s army chief Lt. Gen. Aviv Kohavi on Wednesday hailed “unprecedented” cooperation with the US, as he wrapped up a US visit focused on preventing Tehran from obtaining military nuclear capabilities. (AP)
Share:

Israel’s army chief on Wednesday hailed “unprecedented” cooperation with the US, as he wrapped up a US visit focused on preventing Tehran from obtaining military nuclear capabilities.

Lt. Gen. Aviv Kohavi’s remarks came the same day as Iran said it had foiled a sabotage attack on an atomic energy agency building, as talks continue in Vienna between Tehran and world powers aimed at reviving their 2015 nuclear deal.

At the US military’s Central Command in Florida, Kohavi met Centcom commander General Frank McKenzie, where he discussed the Gaza war, the Syrian arena and coordination between the countries.

“The IDF’s operational cooperation with the US military is unprecedented in its scope and has reached new heights,” Kohavi said in a statement, using the acronym for Israel defense forces.

“The mutual and main goal of action for the two armies is thwarting Iranian aggression,” he added.
“Iran seeks to establish and entrench terrorists in many countries (and) continues to pose a regional threat in terms of nuclear proliferation, advanced weapons systems including ballistic missile capabilities, and the financing of terrorist armies,” the Israeli general said.

Kohavi was also meeting with US National Security Adviser Jake Sullivan on “Iran’s regional entrenchment throughout the Middle East and the flaws” of the nuclear deal with Iran, a statement from the military said.
In meetings with Sullivan and CIA head William Burns, Kohavi was “presenting multiple ways to prevent Iran from acquiring military nuclear capabilities,” the army said.
Kohavi was due to return to Israel on Friday.