In Lebanon, a fresh effort begins to combat political murders 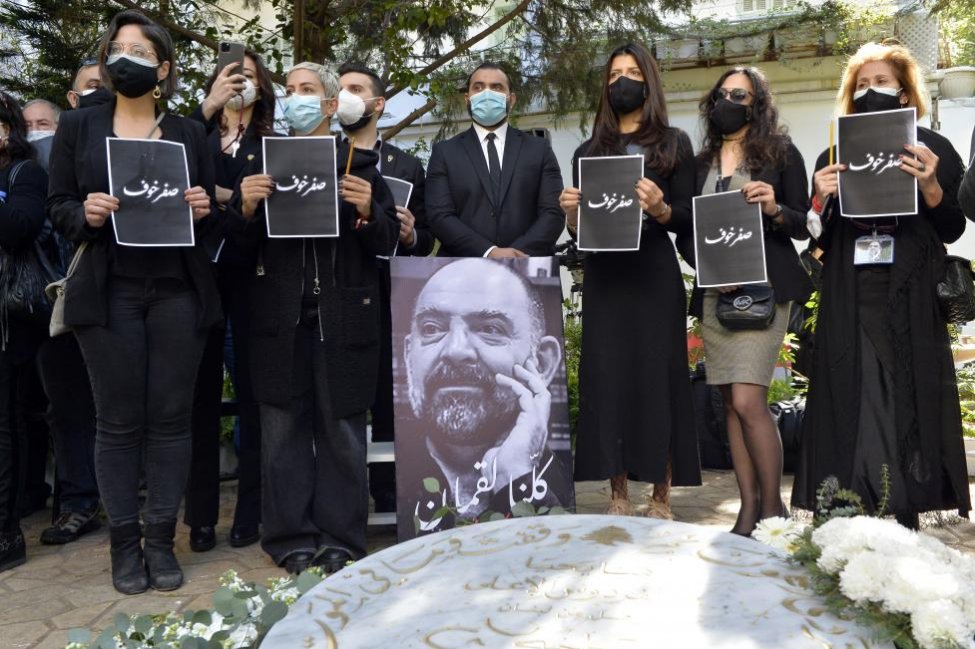 ibute to Lokman Slim , a former staunch critic of the Iran-backed Hezbollah , at Dahyieh south of Beirut, Lebanon, on February 11, a week after he was found shot to death in a rental car in Nabatiyeh, southern Lebanon. File photo by Wael Hamzeh/EPA-EFT
Share:

The family of Lokman Slim, a 58-year-old researcher and staunch critic of the Iran-backed Hezbollah, who was shot dead in southern Lebanon last February, was not willing to accept such a legacy of impunity.

Creating an institution to document Lebanon’s political murders, reopen cases to serve justice and be a reference on the matter was one of the first ideas Slim’s family explored to mark his killing and denounce the “culture of murder.”

“Our goal is justice for Lokman and all the others who were assassinated,” his sister, Rasha al Ameer, told UPI. “We wish to be a reference they [the killers] fear since they don’t fear the judicial system, and embrace all the families who were murdered in such a horrible way.”

Slim was the most recent victim to join a long list of those assassinated in Lebanon. According to a recent compilation by Information International, an independent, regional research and consulting firm based in Beirut, Lebanon was the scene of 220 assassinations and attempted political assassinations since independence in 1943 to February 2021.

They include two presidents, three prime ministers, one mufti and dozens of top politicians, ministers, parliamentarians, security officials and journalists, the bulk of whom were killed over the past decade during post-war Lebanon. Perpetrators of most these crimes are unknown.

Political assassinations were a tactic used by local and regional players, especially during and after the 1970-75 civil war to eliminate opponents, change the course of events, boost influence or control of regional powers, or provoke terror among the population.

The one time the international community reacted in force to such killings was in 2005, when Prime Minister Rafik Hariri was assassinated in a huge truck-bomb explosion that targeted his convoy in Beirut. A U.N. tribunal was set up to investigate the crime.

It took years and millions of dollars for The Special Tribunal for Lebanon, the first tribunal of international character to prosecute terrorist crimes, to convict one Hezbollah member, who still is at large. But it failed to determine who ordered the killing at a time when the militant group kept denying any link.

From day one, the Slim family accused the heavily armed Hezbollah of being behind Lokman’s killing. Hezbollah, the family said, had been threatening him for 15 years, and he was killed in an area in southern Lebanon under the group’s control.

Although Hezbollah chief Hassan Nasrallah rejected such charges, al-Ameer said, “We have not the slightest doubt it was Hezbollah.”

“They have weapons, we don’t have any, and we don’t kill, but we can terrorize them with other means. We want to hold everyone committing such killings to be accountable for their ugly acts,” she added.

The case is being investigated by a judge close to the powerful Shiite groups, Hezbollah and the Amal movement, and Slim’s family feels it will not get a fair outcome, according to Nizar Saghieh, a lawyer and executive director of The Legal Agenda, a Beirut-based nonprofit research and advocacy organization.

“This is one of the biggest examples showing that the Lebanese judiciary is not independent and is not capable of facing those who have influence — those in power,” Saghieh told UPI.

The new Slim institution focusing on political murders still is being formed, but initially is to include a legal department “to find alternatives for the Lebanese judiciary with the help of U.N. rapporteur and lawyers.

A cultural section would encourage writing special studies, essays and novels on political assassinations in Lebanon and the region, al Ameer said.

“We are not judges, and our work is not to condemn, but we want accountability and to have a voice to remind our societies of such horrible crimes committed by any party,” she said.

The United States and Israel are not to be excluded, as they both used “the same tactic,” she added, citing the killings of an Iranian top general, Qassem Soleimani, by a U.S. airstrike at Baghdad International Airport in January 2020 ordered by former President Donald Trump, and of Hezbollah leader Sheikh Abbas Musawi, along with his wife and 5-year-old son, in an Israeli airstrike that targeted his convoy in south Lebanon in 1992.

Arab intelligence services also have been also involved in Lebanon’s political murders. On May 16, 1966, Kamel Mroueh, a prominent Lebanese journalist and founder of the pan-Arab Al Hayat newspaper, was shot dead in his office in Beirut.

The assassin, a Lebanese who confessed to working with Egyptian intelligence, was tried and sentenced to life in prison. He escaped from jail at the start of the civil war in 1975.

But even with that imprisonment, justice was not served, according to his son, Malek Mroueh.

“Absolutely not. The guy who was sentenced because he was caught by mistake was the one who was given the order to kill, but what about the whole apparatus?” Mroueh asked rhetorically. His father’s killing was planned over months after a two-year campaign portraying him as “a traitor” working either for the Americans, British or Saudis.

“It was confirmed that the Egyptian intelligence services were behind it, and they tried to cover for it,” he said.

Mroueh has joined the Slim’s efforts to refresh people’s memories about such political murders, as well as raise awareness.

“It is a whole culture that is really far from democracy and humanity … same jargons and same accusations,” Mroueh said. “It is a long, long combat. You have to put one brick at a time. Sometimes, the bricks will fall and you will have to start again. But what else can we do?”

Political assassinations are only one side of Lebanon’s impunity, unaccountability and failure of the judicial system in Lebanon.

“There is also corruption nobody is tried or held accountable for,” Saghieh said.

“The no-justice in Lebanon also involves the hundreds of thousands of depositors who lost their savings in the banks [during the current crisis], the Beirut port explosion that killed more than 200 people last August and the many massacres, which are crimes against humanity committed during the civil war.”

Lebanon, which has been facing its worst political and financial crisis since the civil war, is on the verge of total collapse, while its mostly corrupt and incompetent leaders still quarrel over the formation of a new government and make no move to rescue the country.

Meanwhile, the population is struggling to secure the basics, suffering from hyperinflation, growing poverty and unemployment and the dramatic collapse in value of the Lebanese pound.

“The whole society is in danger. What is needed is accountability and justice for all,” Saghieh said.