Hezbollah chief hints that a cabinet could be formed soon, attacks US 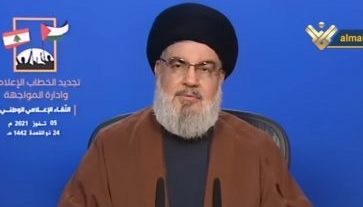 Hezbollah leader Hassan Narallah as he. delivered a speech at the opening of a conference titled “Palestine is Victorious.”
Share:

“These days are supposed to be decisive with regard to the government formation. The meetings that will be held today, tomorrow and after tomorrow may draw clearly the path of the government,” Nasrallah said in a televised speech, without giving details on those meetings.

Nasrallah’s speech was delivered at the opening of a conference titled “Palestine is Victorious.”

Hariri returned to Beirut Sunday after a visit to Abu Dhabi that also included a visit to Istanbul, where he held talks with Turkish President Recep Tayyip Erdogan on bilateral relations between the two countries and developments in Lebanon and the region and a visit to Egypt . The purpose of the trip was to seek investors in Lebanon to help rescue the country from its current financial crisis.

Nasrallah’s comments came as Hezbollah was reportedly still mediating with MP Gebran Bassil, head of the Free Patriotic Movement, to convince him to support Parliament Speaker Nabih Berri’s initiative aimed at breaking the Cabinet formation deadlock, now in its 11th month with no solution in sight

Hariri is also expected to chair a meeting of the Future Movement’s parliamentary bloc to inform them of his decision on whether to push on with his efforts to form a proposed Cabinet of nonpartisan specialists with no blocking one-third plus one [veto power] to any party to enact reforms or step down.

Aoun and Hariri, who are constitutionally mainly responsible for the Cabinet formation, have not been on speaking terms since their last meeting at Baabda Palace on March 22 that failed to resolve their differences over the size and makeup of the government. The two leaders have refused to budge on their conflicting positions and they remain at odds over the distribution of key ministerial seats, namely the Justice and Interior ministries, and the naming of Christian ministers.

Asked on whether Hariri was heading to step down in the face of what Future Movement MPs have said the continued obstruction by Aoun and his son-in-law, Bassil, of his attempts to set up a proposed Cabinet of nonpartisan experts in line with the French initiative designed to rescue Lebanon from its worst economic and financial crunch since the 1975-90 Civil War,

Deputy head of the Future Movement Mustapha Alloush , a former Future Movement MP said in a statement in response to a question whether Hariri was planning to step down if president Aoun and and his son-in-law will continue to obstruct the cabinet formation : “I have no sufficient information to know whether Hariri will step down or form a government. The only obstacle to the government formation is the president’s team.”

Alloush added that the United States and France were trying to prevent Lebanon’s downfall as a result of multiple crises, including an unprecedented economic meltdown that is hitting the Lebanese hard and threatening them with poverty and hunger.

Allloush was referring to last month’s meeting between the foreign ministers of the United States, France and Saudi Arabia who jointly pushed on the sidelines of talks of the Group of 20 for Lebanon’s squabbling leaders to come together to address the country’s mounting crises.

Hariri, who was designated on Oct. 22 to form a new government after caretaker Prime Minister Hassan Diab’s Cabinet resigned last August in the wake of the deadly Beirut Port explosion, has said that stepping down was a “serious option.”

Hariri has put on hold for now his decision to step down in order to give a last chance to Berri’s initiative. Despite being rejected by Aoun and Bassil, Berri has vowed to press on with his initiative.

Qatari Foreign Minister Mohammed bin Abdulrahman Al-Thani will arrive in Lebanon on Tuesday on a one-day.

Qatar’s Al-Jazeera TV said the visit is “part of Qatar’s efforts to help resolve the political crisis in Lebanon.”

During a February meeting with Hariri in Doha , Qatar’s Emir, Sheikh Tamim bin Hamad Al-Thani urged Lebanon’s political parties to put the national interest first and speed up the formation of a new government.

Addressing the issue of the port blast probe, Nasrallah voiced concerns and regretted that those summoned Friday by Judge Tarek al-Bitar “knew that they were being summoned from the media.”

“Justice is still distant and the truth is still concealed,” Nasrallah lamented, reminding that he had called on Bitar’s predecessor, Judge Fadi Sawwan, to publish the technical findings of the investigation and to say whether Hezbollah had any weapons at the port at the time of the blast.

“We reject any political exploitation of the Beirut port blast investigation,” Nasrallah went on to say.

On Friday, National News Agency said Bitar had summoned outgoing premier Hassan Diab and taken steps towards indicting several former ministers and incumbent and ex-security officials over the explosion. Three of the former ministers that Bitar will question are members of parties that are allied with Hezbollah . The judge also intends to question General Security chief Maj. Gen. Abbas Ibrahim, who is also considered to be close to Hezbollah.

With tensions rising between the US and pro-Iranian militias in Syria and Iraq, Nasrallah stressed on Monday that Hezbollah is “facing the American hegemony” in Iraq and Syria.

He added that the conflicts with Israel and the US cannot be separated as Israel’s existence is contingent on American support, saying “Every massacre committed by the enemy is an American massacre, and every aggression of this enemy is American aggression.”

Nasrallah also blamed the US for the worsening economic crisis in Lebanon saying American policy is the “main reason” for the crisis, as “the Americans want to besiege, punish and prevent any aid that comes to Lebanon.”

While Nasrallah admitted that incorrect government policies and corruption were also “among the causes” of the economic crisis, he stressed that the US is the “main cause.”

Hariri and Berri agreed that the PM-designate would submit a 24-minister cabinet line- to President Michel Aoun on Friday, the agency added.