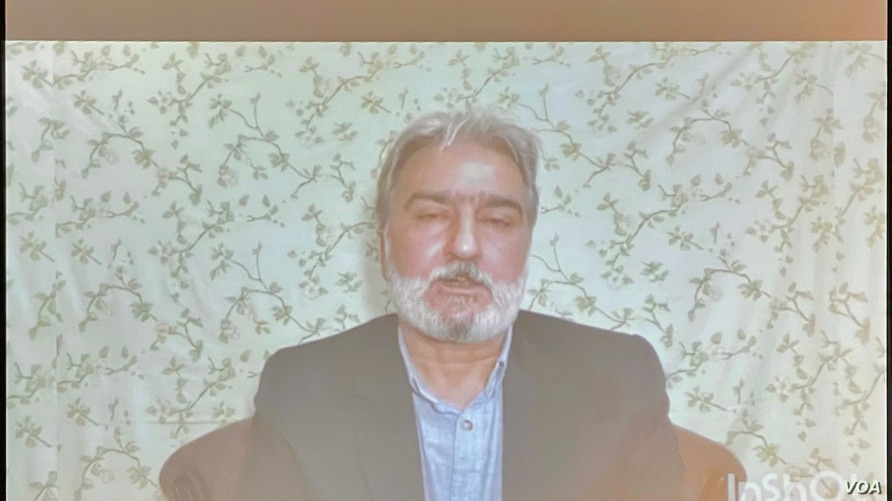 WASHINGTON, DC – Prominent Iran-based dissidents are urging the administration of U.S. President Joe Biden to do more to hold Iranian officials accountable for wide-ranging rights abuses, in order to show Iranians the United States cares about their plight.

“I personally believe President Joe Biden understands our suffering and concerns,” said Shahroudi, speaking in Farsi through an English translation provided by the event organizers.

Addressing Biden, Shahroudi said, “The Iranian opposition asks that you do not provide financial resources that make possible [Iranian leadership’s] economic survival. We [also] ask that you pursue [the regime’s] violators of human rights by preventing them and their families from working and thriving in Western countries.”

Shahroudi, who is based in the Iranian capital Tehran, said honoring those requests would help the U.S. to “wipe clean the bitter memories” the Iranian people have about what he called “wrong-minded U.S. interventions and mistakes of recent decades.”

Nikbakht, also speaking through an English translator in a video message recorded Tuesday from Isfahan, called on the Biden administration to place human rights issues at the top of any negotiations with Iran.

“Using human rights to pressure the regime will produce results because they are not capable of suppressing the entire nation,” Nikbakht said. “Please stay on the side of the Iranian people. If you ignore human rights, or devalue its importance, the Iranian people will suffer irreparable losses and lose confidence in the American people,” he added.

Representatives of Iranian diaspora rights groups including Washington-based Human Rights Activists in Iran and Oslo-based Iran Human Rights told VOA Persian that the appeals of the Iran-based dissidents for more help from the Biden administration have produced little concrete action in the nearly six months since Biden took office on Jan. 20.

The Biden administration also has faced criticism for its response to Iran’s April election to the U.N.’s top legislative body on women’s rights. When asked what the U.S. thinks of Iran winning a seat on the U.N. Commission on the Status of Women, State Department spokesman Ned Price described Iran as being among “countries that have very troubling records, deeply disturbing records.” His comment fell short of the explicit denunciation of the Iran election outcome that many rights advocates had hoped for.

One punitive step toward Iran by the Biden administration came a month earlier, when the State Department sanctioned two Iranian interrogators with the country’s top military force, the Islamic Revolutionary Guard Corps. It said Ali Hemmatian and Masoud Safdari and their immediate family members would be barred from entry to the U.S. in response to their alleged mistreatment of anti-government protesters in 2019 and 2020.

Human Rights Activists in Iran senior advocacy coordinator Skylar Thompson said her group is encouraged by what she called the U.S. shift toward “Magnitsky-style” sanctions such as those imposed on the two IRGC interrogators. A 2016 U.S. law called the Global Magnitsky Act allows U.S. officials to impose visa bans on any individuals suspected of committing rights abuses around the world.

Thompson also expressed understanding for the lack of further Iran action by the U.S.

She cited the Biden administration’s relatively short time in office, its efforts to distance itself from Biden predecessor former President Donald Trump’s “maximum pressure” campaign against Tehran, and what she said was the “fragility” of indirect U.S.-Iran negotiations in Vienna in recent months.

The two sides’ negotiators have been trying to bring each other back into compliance with a 2015 nuclear deal in which Iran promised the U.S. and other world powers to curb nuclear activities that could be weaponized in return for international sanctions relief.

Trump pulled the U.S. out of the deal, known as the Joint Comprehensive Plan of Action, in 2018 and tightened U.S. sanctions to get tougher on Iran, which retaliated the next year by exceeding its JCPOA nuclear activity limits.

In a March press briefing, Price was asked whether the U.S, would follow up its sanctioning of the two IRGC interrogators with further punitive action unrelated to Iran’s nuclear program.

“We can pursue … an Iran that is permanently and verifiably barred from ever obtaining a nuclear weapon … just as we uphold and act in accordance with our values … to make clear that there will be consequences for the sort of gross violations of human rights that these individuals engaged in. We can absolutely do both,” Price said.

“The United States is now forced to negotiate with a regime whose supreme leader, incoming president and incoming head of the judiciary are all on the U.S. sanctions list for human rights abuses. This has created an unprecedented situation,” Thompson said.