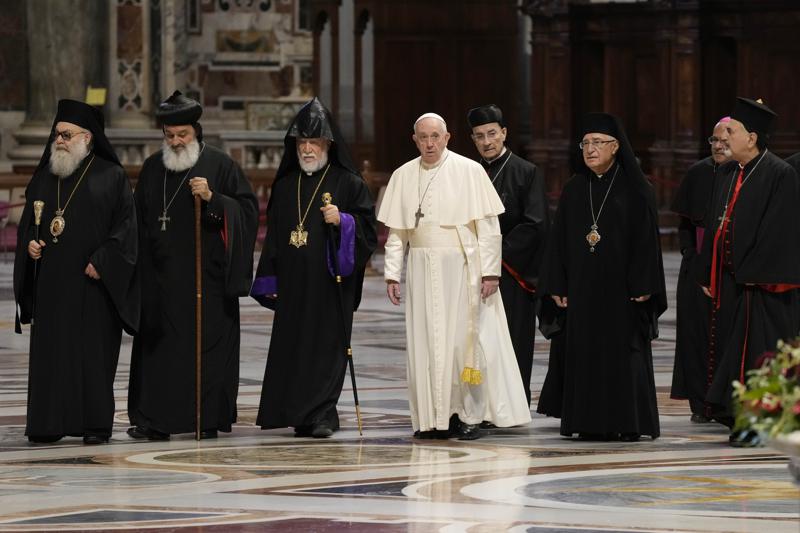 The Patriarch of the Syriac Orthodox Church, Moran Mor Ignatius Aphrem II, second from left, the head of the Catholicosate of the Great House of Cilicia of the Armenian Apostolic Church, Aram I, third from left, Pope Francis, fourth from left, Cardinal Bechara Boutros al-Rahi, firfth from left, Patriarch of Antioch and All the East for the Syriac Catholic Church, Ignatius Youssef III Younan, right, arrive in St. Peter’s Basilica to attend a prayer for Lebanon at the Vatican, Thursday, July 1, 2021. (AP Photo/Gregorio Borgia)
Share:

ROME — Pope Francis welcomed Lebanon’s Christian patriarchs to the Vatican on Thursday for a day of prayer amid fears that the country’s descent into chaos is further imperiling the Christian presence in the country, a bulwark for the church in the Middle East.

Francis greeted the dozen clerics in the lobby of the Vatican hotel where he lives shortly after 8 a.m. and together they walked across a small piazza inside the Vatican Gardens and entered St. Peter’s Basilica. There, they stood in silent prayer around the altar, and descended to the tomb of the Apostle Peter underneath to light a candle as a sign of peace.

The small group of churchmen was spending the rest of the morning and afternoon behind closed doors in talks about how to help Lebanon emerge from the political, financial and social crisis that the World Bank has described as likely to be one of the worst the world has witnessed over the past 150 years.

At the end of the day, Francis will preside over an ecumenical service in St. Peter’s featuring prayers in Arabic, Syriac, Armenian and Chaldean.

Lebanon, a Mediterranean nation of 6 million, including an estimated 1 million refugees, has the largest percentage of Christians in the Middle East and is the only Arab country with a Christian head of state. Christians make up a third of the population.

The country is going through an unprecedented economic and financial collapse, coupled with an 11-month political deadlock over the formation of a new government. The developments pose the gravest threat to its stability since the end of its civil war three decades ago. It is also trying to recover from the devastating Beirut port explosion last summer and the coronavirus pandemic.

Embattled Prime Minister-designate Saad Hariri, who met with Francis at the Vatican in April, said from Beirut that he hoped the meeting would be crowned with success by calling on all Lebanese to preserve their coexistence.

“It is no surprise that the pontiff keeps it in his heart through this invite to 10 spiritual leaders with the aim of getting Lebanon through its difficult reality,” he tweeted Thursday, repeating the words of St. John Paul II that “Lebanon is more than a country, it is a message.”

The Vatican’s foreign minister, Archbishop Paul Gallagher, was blunt in explaining the Holy See’s “strong concern about the collapse of the country” during a briefing with journalists last week.

He said Francis had invited the religious leaders to Rome in an acknowledgment that the Christian community had been particularly hard-hit by the crisis, which has sent the well-educated middle classes fleeing power cuts, fuel shortages, soaring prices and now sporadic acts of violence.

The crisis, Gallagher said, “risks destroying the internal balance and Lebanon’s own reality, putting at risk the Christian presence in the Middle East.”

Noting the potential for Lebanon to fall into conflict, he said the country must be helped economically and to keep the peace, saying it “remains the final vanguard of an Arab democracy that welcomes, recognizes and coexists with a plurality of ethnic and religious communities that in other countries aren’t able to live in peace.”

“It must be helped to maintain this unique identity, to ensure a pluralist, tolerant and diversified Middle East,” he said.

Francis has said he hopes to visit Lebanon once a government is formed. Gallagher said if that happens soon, Francis could make a trip early next year.

President Michel Aoun, a Maronite Christian, followed the opening prayer meeting through a closed circuit TV, his office said. He said in a tweet that the whole world was participating with the pope in prayer for Lebanon.

“Our prayers together is that, as Christians and Muslims, we strengthen the values of truth and justice, balance and mutual respect that reinforces our national unity so that we restore to our nation its unique message of coexistence in the region and the world,” he tweeted.