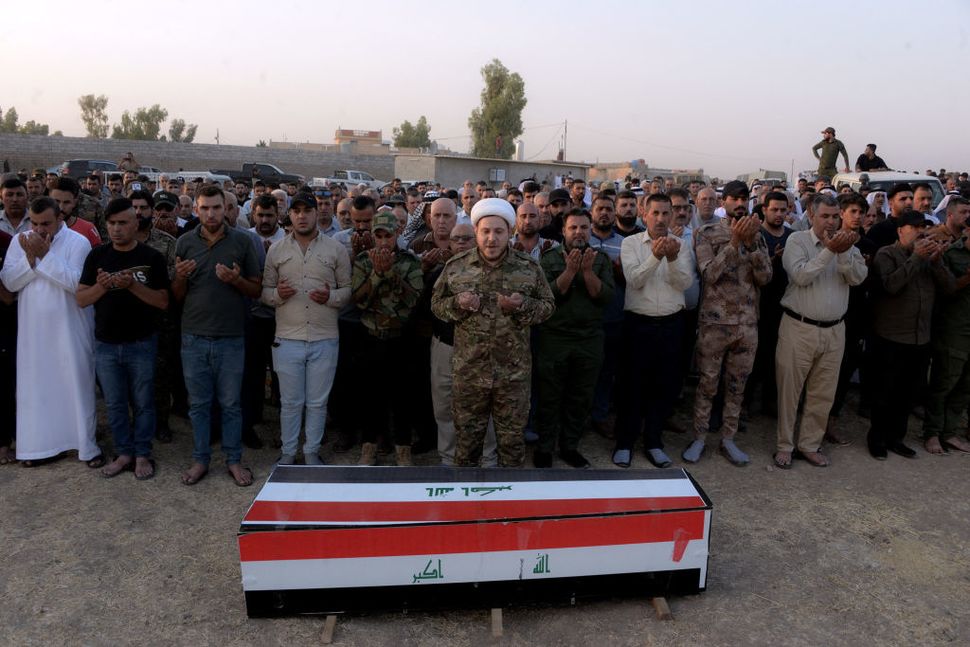 The Biden administration and the leadership in Tehran are poised to ratchet up attacks following a retaliatory rocket strike by pro-Iranian forces in Syria against a U.S. base.

A strike against U.S. and allied forces in Syria has raised new concerns about an escalating cycle of violence with Tehran.

Iranian, Russian and Syrian state media claimed Tuesday a rocket attack the previous night against a U.S. base occupying an oil field in eastern Syria had wounded several of the special operations forces there, including members of the Kurdish peshmerga who were among the most potent ground fighters in the American-led war against the Islamic State group. The attack came a day after a U.S. aerial strike against weapons and drone facilities in Syria and Iraq operated by pro-Iranian militia groups known as the Popular Mobilization Units, which said four of its fighters were killed.

The exchange of violence appears poised to escalate in the near future both militarily and diplomatically. The Iraqi government expressed outrage on Monday that it had not been informed of the U.S. strikes in advance – an apparent violation of the terms by which the Pentagon operates in Iraq at the invitation of the central government in Baghdad. It also comes as the Biden administration tries to restore diplomatic talks with Tehran over its nuclear weapons program.

Analysts say the limited composition of the U.S. strikes, in retaliation for dozens of pro-Iranian militia strikes against U.S. facilities in Iraq and Syria, has raised new alarms about how Tehran will respond through its regional proxies.

“This attack, like the one preceding it, will not deter these militias from targeting U.S. and coalition forces again,” Randa Slim, a senior fellow at the Middle East Institute, said of the U.S. operation late Sunday. “To the contrary, given the fact that four of their fighters were killed in the attack, and election season has already begun in Baghdad, these militias will use it to reinforce their narrative that their ‘resistance’ against the U.S. is for the defense of Iraqi sovereignty.”

Slim says Tehran appears to be using the attacks as leverage in stalled negotiations with the U.S. over its nuclear program and the extent to which it will return to the 2015 deal brokered by the Obama administration. And it has strengthened its control over the government in Iraq through the militias it supports – which became part of the country’s defense forces during the U.S.-led war against the Islamic State group – despite Baghdad’s attempts to come out from under Iranian influence through new partnerships with its Arab neighbors, particularly Jordan and Egypt.

“No matter how hard the Iraqi government tries to steer the country away from the Iranian-U.S. conflict by reorienting its foreign policy toward its Arab neighborhood, Iran-backed Iraqi militias keep dragging it back into it,” Slim says.

Others say the Biden administration will have to step up the military response if it is indeed serious about deterring Iran.

“Thus far, it has struck back just twice in response to twenty-four rocket and drone attacks over the past five months. If this response ratio continues, militias will simply keep escalating, and American lives will be lost,” Michael Knights writes in an analysis note for the Washington Institute for Near East Policy.

The Biden administration’s last retaliatory strike against Iran, in February, resulted in no casualties among senior militia leaders – apparently by design to avoid needless escalation. But those limitations also appear to have failed in sending the desired message.

“One can safely state that Iran no longer fears being hit with heavy retaliation or upsetting the nuclear negotiations – or perhaps no longer cares how those talks conclude,” Knights writes. And he warns of new violence to come: “Iran and its militias tend to escalate against U.S. targets until they are checked.”

Knights recommends the Biden administration shift its deterrent strategy against Iran by hitting back harder or more frequently, or specifically targeting the leadership of its proxies. He also suggests adopting a tactic employed by Israel of not openly taking credit for such strikes, which creates an air of unpredictability against its adversaries while granting them the room to de-escalate without appearing to be backing down.

The Defense Department did not offer any details on wounded U.S. or allied troops on Tuesday morning in keeping with established policy against publicly revealing the effect of enemy strikes.

The U.S. under the Trump administration maintained a presence in Syria to also prevent Iran-backed forces from seizing territory there. The Pentagon withdrew some forces and contained the others to areas around the oil fields in Syria following then-President Donald Trump’s orders to remove all forces from Syria, which he later amended to have them focus only on seizing local oil fields.