Protests continue in Lebanon, as its currency hits another historic low against the dollar 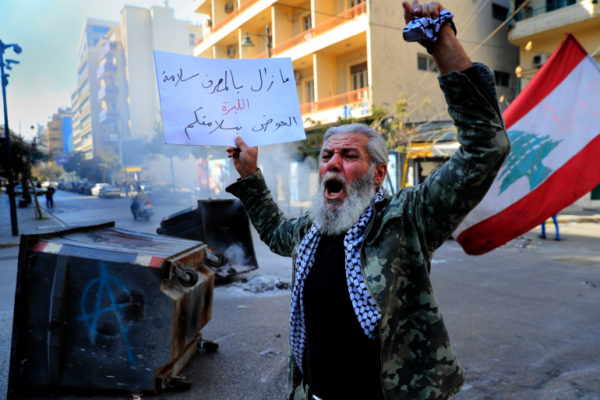 File photo: A protester shouts slogans in front of burning garbage containers used to block a main road during a protest against the increase in prices of consumer goods and the crash of the local currency, in Beirut, Lebanon . The Arabic placard reads:”Salameh (the Central Bank governor) is still at the bank while the lira is dead.” One protester told the reporters ‘We’re sick of the Lebanese politicians . They are still bickering while the currency has completely collapsed ’ (AP Photo/Hussein Malla)
Share:

Outraged over the evaporating value of the Lebanese pound , protesters in Lebanon blocked several roads on Saturday.

Around noon Saturday, the dollar was selling for LBP 17,600 on the black market, a rate not seen in Lebanon’s modern history .

In Tripoli, several shop owners closed their businesses to protest over the economic situations

Many shops also closed in the southern city of Sidon, with owners decrying the “devastating ” rise in the dollar exchange rate.

According to experts , as long as the situation remains the same, the price of the dollar will continue to rise.

The wages of the majority of people in Lebanon are paid in Lebanese pounds , the drop to 176, 00 means they have lost about 97% of their income , while at the same time inflation is an all time high in Lebanon since goods are priced in pounds at at the black market rate .

This week’s collapse comes as officials wrangled over the partial lifting of subsidies on fuel and other goods as the Central Bank runs out of foreign currency reserves .

According to analysts Hezbollah , which is allied with the Syrian regime has profited greatly from the subsidy programs on fuel, medicine and flour . Most of the subsidized goods found their way to Syria . They were smuggled thru illegal border crossing that the Iranian backed militant group controls. This is why fuel is being rationed in Lebanon and the pharmacies ran out of medicine and the price of bread has skyrocketed.