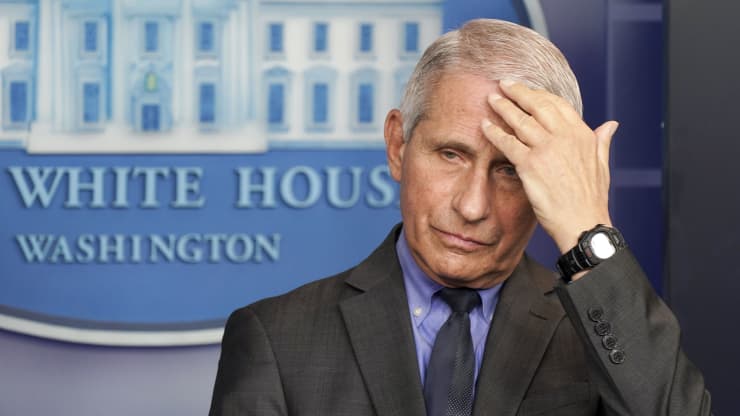 Delta, first identified in India, now makes up about 20% of all new cases in the United States, up from 10% about two weeks ago, Fauci said during a White House news conference on the pandemic.

He said delta appears to be “following the same pattern” as alpha, the variant first found in the U.K., with infections doubling in the U.S. about every two weeks.

“Similar to the situation in the U.K., the delta variant is currently the greatest threat in the U.S. to our attempt to eliminate Covid-19,” he said.

Fauci’s comments come after CDC Director Dr. Rochelle Walensky on Friday urged Americans to get vaccinated against Covid, saying she expects delta to become the dominant coronavirus variant in the U.S.

Studies suggest it is around 60% more transmissible than alpha, which was more contagious than the original strain that emerged from Wuhan, China, in late 2019

“As worrisome as this delta strain is with regard to its hyper transmissibility, our vaccines work,” Walensky told the ABC program “Good Morning America.” If you get vaccinated, “you’ll be protected against this delta variant,” she added.

The United Kingdom recently saw the delta variant become the dominant strain there, surpassing alpha, which was first detected in the country last fall. The delta variant now makes up more than 60% of new cases in the U.K.

Health officials say there are reports that the delta variant also causes more severe symptoms, but that more research is needed to confirm those conclusions. Still, there are signs that the delta strain could provoke different symptoms than other variants.

Fauci said Tuesday the U.S. has “the tools” to defeat the variant, urging more Americans to get fully vaccinated against Covid and “crush the outbreak”

The Biden administration said earlier Tuesday that it likely won’t hit President Joe Biden’s goal of getting 70% of American adults to receive one vaccine shot or more by the Fourth of July.

The World Health Organization said Friday that delta is becoming the dominant variant of the disease worldwide.

On Monday, WHO officials warned the variant is the fastest and fittest coronavirus strain yet, and it will “pick off” the most vulnerable people, especially in places with low Covid-19 vaccination rates.

It has the potential “to be more lethal because it’s more efficient in the way it transmits between humans and it will eventually find those vulnerable individuals who will become severely ill, have to be hospitalized and potentially die,” Dr. Mike Ryan, executive director of the WHO’s health emergencies program, said during a news conference.

Delta has now spread to 92 countries, Maria Van Kerkhove, the WHO’s technical lead for Covid, said Monday. She said, “unfortunately we don’t yet have the vaccines in the right places to protect people’s lives.”

The WHO has been urging wealthy nations, including the U.S. to donate doses. The Biden administration earlier Monday detailed where it will send 55 million vaccine doses, the majority of which will be distributed through COVAX, the WHO-backed immunization program.

“These vaccines are highly effective against severe disease and death. That is what they are intended for, and that is what they need to be used for” Van Kerkhove said. “This is what COVAX and WHO and all of our partners have been advocating for, that these vaccines reach people most at risk.”