Biden on summit with Putin: ‘I did what I came to do’ 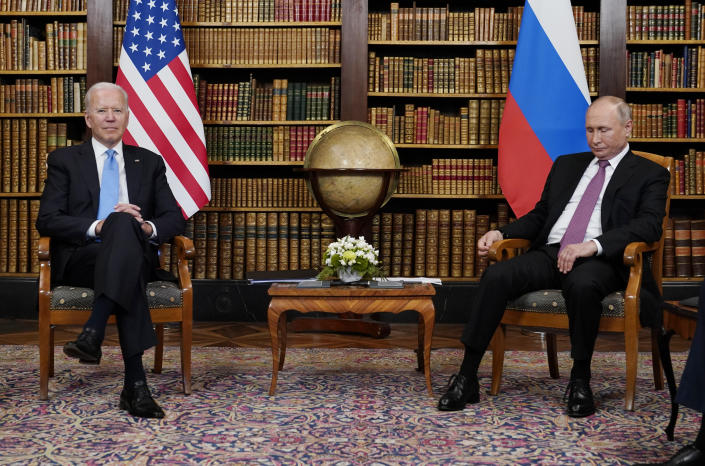 Presidents Biden and Putin met in Geneva for about two and a half hours, well under the five- or six-hour summit that was expected. (Patrick Semansky/AP)
Share:

By Brittany Shepherd and Jenna McLaughlin

President Biden’s much-anticipated bilateral meeting with his Russian counterpart, Vladimir Putin — a man he has previously called a “killer” — yielded few concrete announcements yet signaled a positive shift in diplomatic relations between the two leaders.

Biden’s meeting with Putin was the first in what is likely to be a years-long process toward reaching common ground on sensitive issues, ranging from human rights abuses and Russian-linked cyberattacks to diplomatic expulsions and electoral interference.

Speaking at a solo Wednesday evening press conference in Geneva following a more than two-hours-long session with Putin, the U.S. president highlighted the issue of strategic stability, the idea of working with Russia to reduce the threat of war.

Biden said that he and Putin “agreed today to launch a bilateral strategic stability dialogue. That’s diplomatic speak for saying, Let’s get our military experts and our diplomats together to work on a mechanism that can lead to control of new, dangerous and sophisticated weapons.”

Of the tenor of the meetings, Biden said he “did what I came to do,” noting that the tone was “good, positive. There wasn’t any strident action taken. It was not done in a hyperbolic atmosphere — that is too much of what is going on.”

Biden said the day’s conversations were a necessary part of the bilateral relationship.

“President Putin and I share a unique responsibility to manage the relationship between two powerful and proud countries — a relationship that has to be stable and predictable,” he said.

Biden also told reporters he and Putin had agreed to launch a bilateral diplomatic working group with the aim of curbing arms proliferation.

In the run-up to the summit, Biden was less critical than he’s been in the past of the Kremlin leader, pivoting away from his prior characterizations of Putin as a “killer.”

During the press conference, Biden wouldn’t comment on his level of trust in Putin. “This is not about trust. This is about self-interest and verification of self-interest. That’s what it’s about,” he said.

While Biden and Putin emphasized future bilateral talks on arms control, the two leaders also focused on the subject of cyberattacks.

In light of a spate of recent damaging digital disruptions in the United States linked to Russia, Biden told journalists he had made it clear there would be consequences for future digital meddling. “I pointed out to him that we have significant cyber capabilities and he knows it,” he said.

Biden also said he gave Putin a list of 16 sectors the U.S. considers “critical infrastructure,” from energy to water, which he argued should be off limits to digital disruption. He said he asked Putin how he would feel if ransomware struck a pipeline from Russian oil fields. “He said it would matter,” Biden said.

While there was little drama from the two leaders’ meeting — which lasted two hours and 38 minutes, falling short of the estimated five- or six-hour summit — Western journalists accused Russian security of manhandling them earlier in the day.

In his own press conference an hour prior to Biden’s, Putin refused to commit to investigate the perpetrators of the ransomware attack on Colonial Pipeline, despite the White House’s assertion that the criminals are operating in Russia. Putin claimed through unidentified “U.S. sources” that most cyberattacks actually originate from the U.S. and the West rather than Russia. He also claimed that the U.S. had sent Russia 10 requests in the past year to investigate cyberattacks emanating from Russia, while Russia had sent 35 requests in the same period, receiving no response.

However, Putin told reporters that both countries consider cybersecurity critical, and the two leaders agreed to have bilateral discussions on the issue. Biden said it remains to be seen in “six months to a year” whether those discussions are successful in establishing proper protocols in cyberspace and other areas.

During his press conference, Biden said he had brought up with Putin the fate of two American citizens the U.S. government has said are wrongfully detained in Russian prisons: Paul Whelan and Trevor Reed. “We discussed this,” Putin said during his presser. “There could be some ground for compromise.”

As Biden was ending his press conference, he responded to a shouted question about Whelan and Reed, saying that “we’re going to follow through with that discussion.”

Putin during his earlier press conference called Biden “an experienced statesman” who was very different from former President Donald Trump. He described the meetings as “quite constructive.”

“There was no hostility. Quite the contrary,” he said.

According to Putin, both leaders agreed that ambassadors from the U.S. and Russia, who had departed following a series of mutual diplomatic expulsions, should return to their respective posts.

Asked if he trusts Biden after their meeting, Putin said: “There’s no happiness in life. There’s only a mirage on the horizon … but I believe there’s a spark of hope in his eyes.”