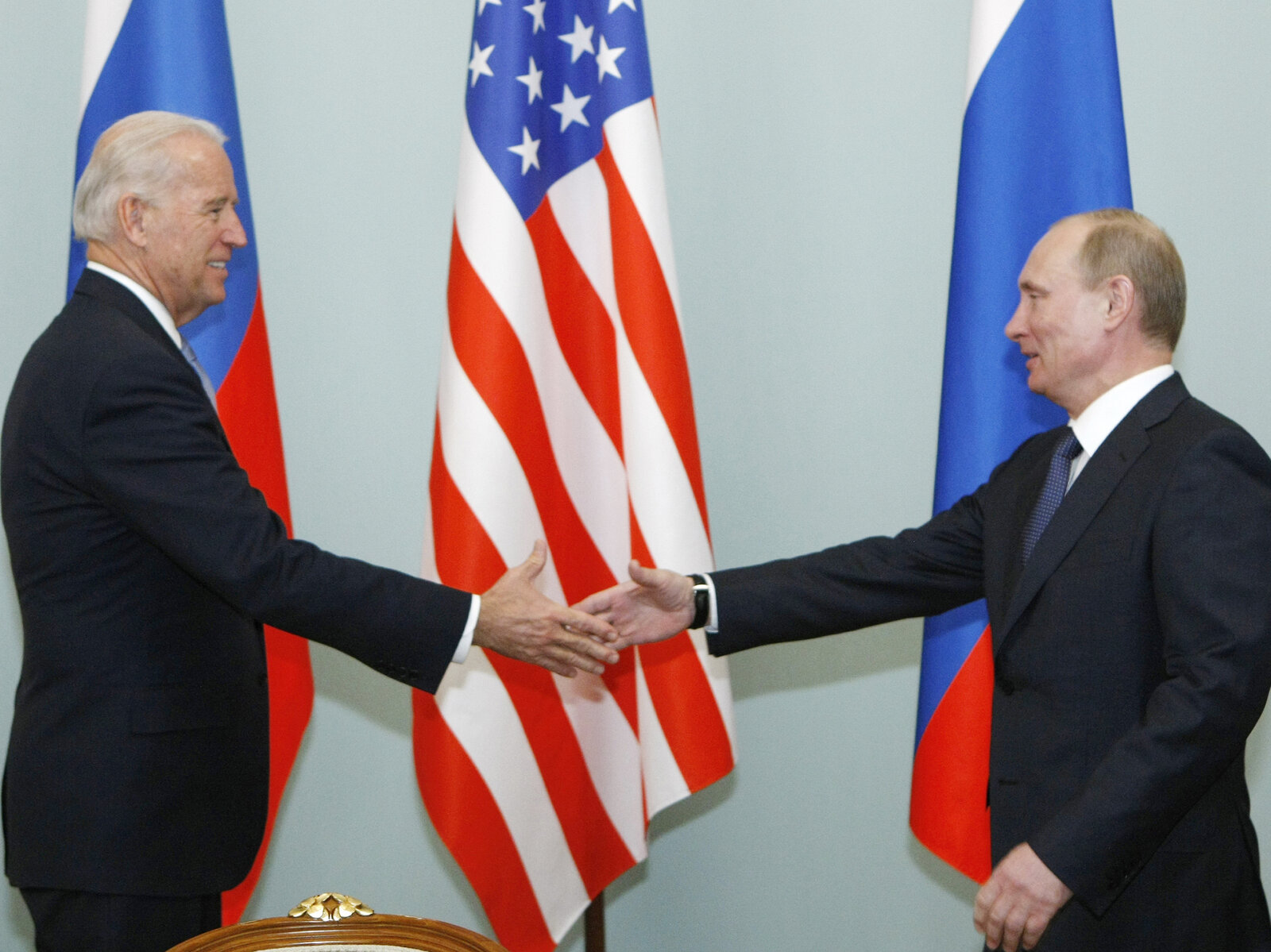 FILE – In this March 10, 2011, file photo, then Vice President Joe Biden, left, shakes hands with Russian Prime Minister Vladimir Putin in Moscow, Russia. President Joe Biden will hold a summit with Vladimir Putin next month in Geneva, a face-to-face meeting between the two leaders that comes amid escalating tensions between the U.S. and Russia in the first months of the Biden administration. (AP Photo/Alexander Zemlianichenko, File)
Share:

Biden has always been blunt in his assessments of Putin, telling the Russian leader to his face a decade ago that he believes he has “no soul” and calling Putin a “killer” in a televised news interview earlier this year.

White House allies say that Biden will go into the meeting with open eyes and well-prepared to confront Putin over Russia’s aggressive conduct and to lay out consequences for further provocations.

The Wednesday meeting is expected to be frosty, and the White House has set expectations low, saying Biden’s goal is to put the U.S. on a path to a more predictable relationship with Moscow. It is certain to draw sharp contrast with the 2018 summit between then-President Trump and Putin in Helsinki, during which Trump triggered enormous controversy by doubting the U.S. intelligence community’s assessment of Russian election interference during a joint press conference.

Biden has faced criticism from certain corners for even setting the meeting, with some Republicans accusing him of rewarding Putin for destabilizing behavior.

Allies point to Biden’s experience in the foreign policy realm as a key advantage going into the meeting in Geneva.

“He’s got literally decades of experience standing up to authoritarians, meeting with and confronting national leaders with records of human rights violations and aggression,” said Sen. Chris Coons (D-Del.), a close associate of Biden’s in the Senate.

“He’s known Putin for years so, in contrast to his predecessor, I think he’ll go into this meeting well-briefed, well-aware of what the challenges are of interacting with Putin, clear-eyed about the limitations on any chance for us to cooperate, and intending to lay out clear lines about Russia’s recent conduct,” Coons said.

Biden met with Putin, then Russia’s prime minister, during the Obama administration in 2011 and repeatedly and publicly rebuked him after Russia annexed Ukraine’s Crimean Peninsula in 2014. Biden as vice president led the Obama administration’s efforts to show support for Ukraine following the Russian invasion, traveling to Ukraine several times and engaging regularly with its leaders.

At the same time, Biden has been consistent in his belief that the U.S. can cooperate with Russia in areas of mutual concern even when there is confrontation between Washington and Moscow. Biden told an audience following a 2015 speech on Russia and Ukraine at the Brookings Institution that he believed Putin to be “practical” in that he wouldn’t act in a way that is contrary to his own interests or would result in heavy costs.

“It seems to me that it has been the history of successful American foreign policy going back 100 years that it makes sense to cooperate where there is a clear mutual interest as long as you’re not being asked to back off matters of principle that matter to the security and wellbeing of your country and your allies and your friends,” Biden said.

The stakes are high for Wednesday. Since Biden last met Putin in person, the U.S. has accused Russia of interfering in two domestic elections — the second in 2020 to weaken his own candidacy — and executing an unprecedented cyberattack against U.S. businesses and government institutions.

Russia has also continued its occupation of Crimea in the face of international condemnation. In addition to these issues, Biden is expected to raise concerns about the Kremlin’s suspected poisoning and jailing of Putin critic Alexei Navalny and recent ransomware attacks perpetrated by Russian cyber criminals.

“We are not looking for conflict. We are looking to resolve those actions which we think are inconsistent with international norms, number one,” Biden told reporters Sunday at a press conference following a Group of Seven (G-7) summit in the U.K. “Number two, where we can work together, we may be able to do that in terms of some strategic doctrine that may be able to be worked together, we’re ready to do it.”

Evelyn Farkas, who served as deputy assistant secretary of Defense for Russia, Ukraine, and Eurasia under the Obama administration, said that it will be critical for Biden to communicate to Putin the consequences for continued Russian aggression.

“What we’re trying to do is just establish some clear rules,” Farkas said. “One state breaks the global norm, all hell can break loose, and we want to make sure the Russian government understands that. I think that’s what [Biden] means by stabilizing – understanding if you do X, we are going to do Y, so there is no sudden escalation or miscalculation.”

Some see the in-person setting as a positive for Biden, pointing to the level of comfort he has meeting one-on-one with others. Biden has already spoken by phone with Putin to confront him over Russia’s activities.

“He’s a people person, so the chance to meet with anybody comes very naturally to him. It’s a natural setting for him. It’s his comfort zone,” said Moe Vela, a former Biden aide in the Obama administration. “I anticipate he will be charming, cordial, but firm.”

Still, experts say that Putin will seek to use the meeting to boost his own standing domestically in Russia. Fiona Hill, who served as senior director for European and Russian affairs on Trump’s National Security Council, said that Putin wants to keep the U.S. as a “sparring partner” to demonstrate strength at home.

Hill also predicted that Putin would try to use U.S. political divisions against Biden in the meeting.

The Russian president has recently criticized the prosecutions of rioters who stormed the Capitol on Jan. 6. In addition to undermining the candidacy of Biden and then-Democratic nominee Hillary Clinton in 2016 and aiding Trump, intelligence officials say Putin’s goal in meddling in U.S. elections has been to undermine confidence in democratic elections and sow divisions.

During an interview with NBC News ahead of the summit, Putin described Trump as an “extraordinary” and “colorful” individual but signaled he could work with Biden.

“The transatlantic alliance has to appear strong but the problem is we have to appear strong at home. And Putin knows that Biden is going in with a massive disadvantage. Putin can lock up his opponents. There isn’t much of an opposition. The United States is fighting with itself and Putin has been throwing accelerant on the fires of polarization here,” Hill told reporters on a call organized by the Brookings Institution, where she is a senior fellow.