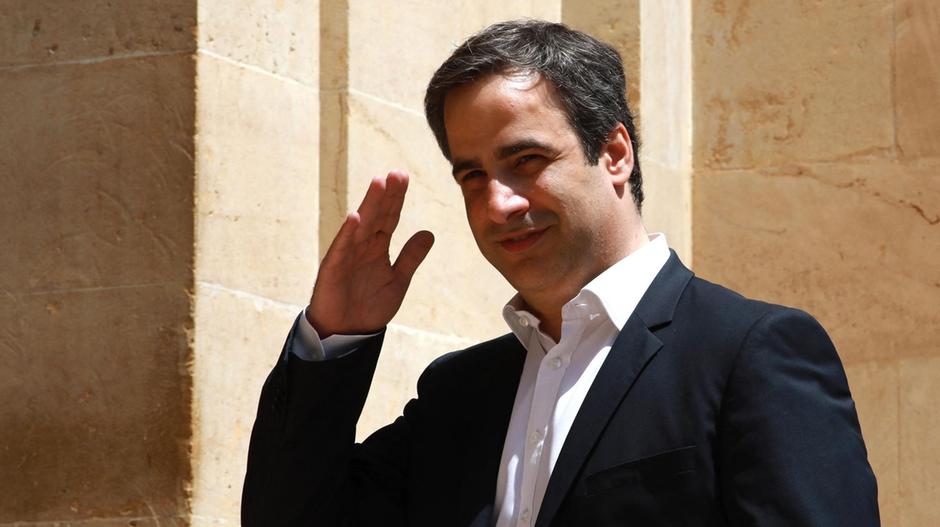 File photo of Michel Moawad who stepped down as an MP after the port explosion in Beirut last August. AFP
Share:

Lebanon’s economic crisis will lead to chaos if left unchecked, one of the country’s political leaders has told The National.

For more than 15 years, Michel Moawad, leader of the Independence Movement, has campaigned for a sovereign and independent Lebanon.

But the country, he said, can ill-afford to wait for a new Parliament to begin tackling the worst economic crisis in its modern history.

The National is interviewing political and civil society figures who are looking ahead to elections in 2022,claiming they can offer a route out of the crisis.

Once known for its vibrant banking sector, tourism industry and nightlife, more than half of Lebanon’s people are now in poverty.

“The cost of inaction will be tremendous both for ordinary Lebanese and the international community if Lebanon were to turn into a failed state,” Mr Moawad – the son of Rene Moawad, the Lebanese president murdered in November 1989 after just 18 days in office – told The National.

Mr Moawad was speaking from his residence in Baabda overlooking Beirut port – the site of a massive explosion in August which strained Lebanon’s already battered economy.

Mr Moawad resigned from Parliament after the blast in protest at what he said was widespread corruption throughout the state.

He was joined by a number of independent MPs and members of the Kataeb party, another opposition group.

Since then, Mr Moawad has called for a transitional government of independent experts to contain the crisis and prepare for parliamentary elections scheduled for May 2022.

But Mr Moawad’s calls, like those of his opposition peers, are falling on deaf ears.

Lebanon is still without a fully functioning government and it is still not known what triggered the explosion, who owned the explosive chemicals stored there or why they were kept unsafely for six years at one of the region’s busiest ports, with the knowledge of the country’s top officials and security agencies.

Mr Moawad said the lack of accountability and worsening economic crisis led the Independence Movement and like-minded opposition groups to rethink their programme beyond the traditional political divide over the pivotal issue of Iran-backed Hezbollah’s weapons.

“Prioritising Lebanon’s national interests over foreign agendas is key to the stability and prosperity of our country but should go hand in hand with a new economic model that protects our free-market economy and upholds our liberal values while advancing social justice,” he said.

That model is currently being discussed with the Kataeb party among other opposition groups, Mr Moawad said.

“We are very close to reaching a comprehensive agreement that will bring major opposition groups under the umbrella of a uniform programme that touches on reforming Lebanon’s political system and economic model.”

This programme touches on a wide array of reforms, from the introduction of structural economic changes to decentralisation – one of the main political changes stipulated in the 1989 Syrian-Saudi brokered Taif agreement that ended Lebanon’s 15-year civil war.

“Our ultimate objective is to build a functioning decentralised civic state that safeguards pluralism and allows the Lebanese to prosper,” he said.

Like his father, Mr Moawad has long-held the belief that Lebanon would prosper only when the state exercises its full sovereignty. This was at the core of the alliance that emerged following the assassination of former prime minister Rafik Hariri in 2005, an event that divided the country into two major rival camps.

The western-backed alliance that brought Mr Moawad together with other members of the March 14 coalition pressured Damascus – blamed by many at the time for Mr Hariri’s assassination – into withdrawing its forces from Lebanon after decades of political and military domination .

Rene Moawad died when a car bomb hit his motorcade on Independence Day. He was known for his moderate positions and his efforts to bridge the gap between warring parties.

His assassination, less than three weeks after his election and the ratification of the Taif agreement, was widely blamed on Damascus.

Mr Moawad says his message resonates more than ever today because Lebanon can no longer afford the costs associated with regional tensions between Iran and its rivals.

The heavy toll the economic crisis is taking on the country’s armed forces was evident in the Lebanese army chief’s recent, rare criticism of the ruling class.

“Where are we are heading? What are your plans?” Gen Joseph Aoun asked politicians in March as hundreds of Lebanese took to the streets to protest against a record plunge in the Lebanese pound, which has lost more than 85 per cent of its value against the dollar since August 2019.

Since then, Gen Aoun has engaged major powers, including the US and France, to secure financial and logistical aid for the army, as discontent grows among soldiers whose salaries are losing value.

French Foreign Minister Jean Yves Le Drian warned Lebanese officials during a visit to Beirut last month that his government was preparing sanctions on officials they regard as responsible for obstructing the formation of a new Cabinet.

“Maintaining a strong and cohesive military institution and vital health and educational services is key to saving Lebanon and laying the foundations for a strong state,” Mr Moawad said.