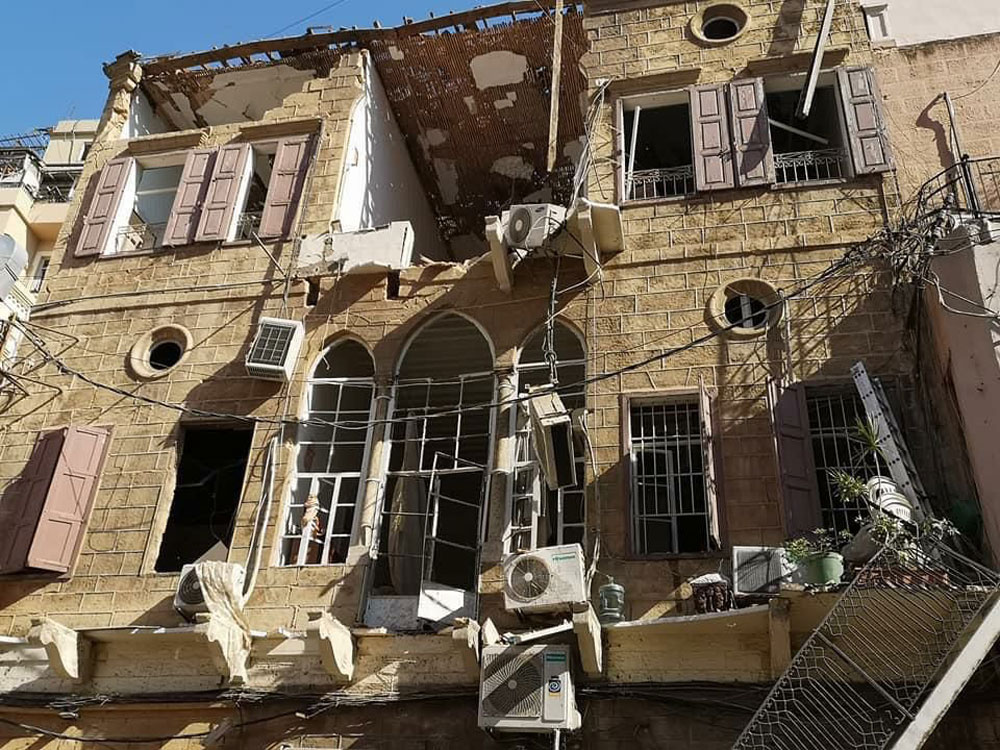 Gemmayze one of the historic and upscale district in Beirut that was destroyed by the Beirut port explosion and the owners of the businesses were not compensated by the corrupt government of Lebanon nor the insurance companies . This is where world famous restaurants and bars are located
Share:

BEIRUT, June 5 (Xinhua) — Rita Aziz, manager of a Japanese restaurant in the district of Gemmayze, carefully decorated the tables with delicate table cloths, while supervising workers fixing the restaurant doors, which were damaged by Beirut port’s blasts on Aug. 4, 2020.

“The whole entrance to the restaurant, our offices, tables and fridges were fully destroyed by the blasts,” Aziz told Xinhua, adding the shop owner had received merely 13 million Lebanese pounds (around 1,000 U.S. dollars at the black market rate) in compensation from the government, which is a small amount compared to the high rehabilitation cost.

“The owner insisted on paying out of his pocket to fix the restaurant despite the scarce profit he earned amid the current economic collapse in Lebanon,” Aziz said.

Beirut port’s blasts, which were caused by the detonation of 2,750 tons of ammonium nitrate, destroyed more than 19,000 businesses in Achrafieh, Gemmayze, Mar Mikhael and other nearby areas, according to an assessment reported by the Lebanese army.

Faltering business activities and restrictions imposed by banks on deposits’ withdrawals forced some shop owners to wait for possible governmental support to rehabilitate their properties, while more others decided to fight out of the dilemma on their own as the promised support may be hopeless in the foreseeable future.

Therese Imad, manager at Gladdy’s souvenir shop, said the shop owner did not receive support from the government but he insisted on fixing the damage to keep the shop open.

“The rent is cheap, otherwise we could not afford to reopen the shop,” Imad told Xinhua.

Wissam Awad, owner of Bavaglino, a popular Italian restaurant in Gemmayze, lost the eatery as well as his long-awaited hotel project located in the main street of Gemmayze which was completely destroyed by the explosions.

Awad decided to fix his restaurant without waiting for governmental compensation. “I have spent a lot of time training the staff. They will be jobless immediately without this restaurant,” he said.

In September 2020, Lebanese President Michel Aoun signed a decree allocating 100 billion Lebanese pounds to a compensation program for the thousands of homes and businesses devastated by the Beirut’s blasts. Lebanese army and Beirut municipality had been tasked to distribute the funds.

The priority of the fund distribution was given to households, followed by the businesses, said Mohamad Kheir, the secretary general of Lebanon’s Higher Relief Committee.

“Honestly, I’m not sure businesses will be compensated soon given the dire economic situation in the country,” Kheir told Xinhua.

Meanwhile, a report issued earlier this year by the Insurance Control Commission noted that insurance companies have only paid 3.6 percent of around 1.5 billion dollars in the losses from the explosions, as they wait the results of investigations.