Israeli PM Netanyahu is on the way out 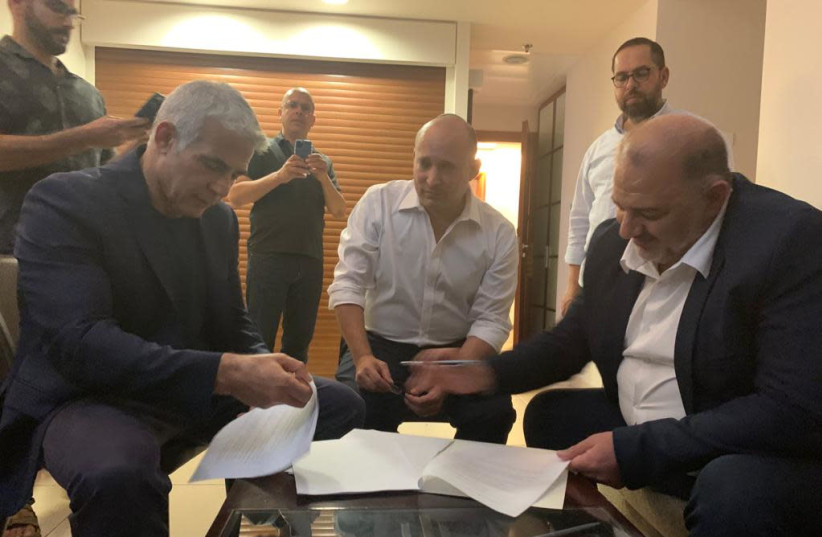 Benjamin Netanyahu has often been called Israel’s Teflon prime minister. But even Teflon, we now know, breaks down, wears out and may be so dangerous it should be retired from use.

It would not be too much of a stretch to say the same is true of Netanyahu, who has been in politics since I was a child. I covered his first election to the premiership 25 years ago, when the hard-right Likudnik bested the Labor Party’s Shimon Peres just six months after the assassination of Yitzhak Rabin. Since 2009, he has continuously held the office for a record four more terms.

While it might seem that, on the heels of another horrifying bout of Israeli-Palestinian violence, the Middle East is a region of hopeless, intractable conflict where nothing really changes, the fact that a new Israeli government is taking shape this week without Netanyahu at the helm is proof that things are not necessarily as stuck as they seem — and that the Teflon coating could only protect him for so long.

Younger leaders who have been nipping at Netanyahu’s heels for years finally emerged with a historic power-sharing deal Wednesday: a unity government that draws in a variety of parties and draws him out of the picture. It is a group of unlikely bedfellows brought together solely to keep Netanyahu — who could only muster a quarter of the available Knesset seats in the March elections but still received significantly more of the vote in March than any other party — out of office.

At the center of this revolution from within are two newer Israeli politicians: Yair Lapid, 57, a former TV anchor who leads the centrist Yesh Atid (“There Is a Future”) party, and Naftali Bennett, 49, a software entrepreneur and former head of the settlement movement who runs the right-wing Yamina (literally, rightwards) party. Because coalitions are necessary to build a governing majority in Israel, the two will bring at least six other wide-ranging parties into the deal, the most historic of which will be Ra’am, led by Muslim pragmatist Mansour Abbas, the first Israeli Arab party to be part of the governing coalition.

After an 11-day war between Israel and Hamas-run Gaza that ended with a cease-fire in late May, it’s an almost-inspiring step back from the abyss, particularly because this latest chapter of conflict tore at the very seams of Arab-Jewish coexistence inside Israel proper, with mob violence in cities with mixed populations. Indeed, the three kingmakers of this deal — Bennet, Lapid and Abbas — sound a bit like someone’s idea of a good political joke. “So a Jewish settlement leader, a secular journalist and an Islamist walk into a bar …”

But it remains to be seen whether they are united by more than a wish to see Netanyahu go, or at least to send him into the opposition. As Michael Koplow, policy director of the Israel Policy Forum in Washington, D.C., put it in his morning commentary on Thursday, “Unprecedented unity and unprecedented dysfunction are not mutually exclusive.”

The first challenge to their solidarity is already upon them: A parliamentary vote in Israel’s Knesset is needed to confirm the new coalition, and Netanyahu is working feverishly to try to undermine it by convincing individual members of the coalition parties to peel away from a Franken government whose components hold diametrically opposing views.

Secretary of state arrives in Mideast to push for peace talks

Netanyahu has been calling out to his loyalists via Twitter to stop the formation of a “dangerous left-wing government” in a moment that analysts can’t help but compare to the atmosphere leading up to the Jan. 6 insurrection in Washington. He’s marketing in wild conspiracy theories to try to undermine the would-be coalition, accusing Bennett of “selling the Negev” to Ra’am to stir up ultranationalist fears. It’s no wonder that Netanyahu, who once employed Bennett and considers him an ally, calls his ascendancy a fraud, again taking a page from MAGA messaging.

The speaker of the Knesset is from Netanyahu’s Likud party and has the power to delay the vote to confirm the government until June 14. That provides a window of time for Bibi, as he is known among his supporters, to pull out all the stops to try to scuttle the deal. But he’s unlikely to be successful, in part because the desire to replace Netanyahu after decades of dominance has support from such otherwise disparate corners of the Israeli political spectrum, gathering steam from the progressive-left Meretz party to conservative Islamists to religious nationalists opposed to territorial compromise.

Even so, Netanyahu — unlike his good friend former President Donald Trump, who is spinning his wheels at Mar-a-Lago and biding his time until 2024 — can be an undermining force within the current parliamentary opposition given his alliance with far-right and religious parties that will be outside the coalition.

But therein lies the strength of a coalition so sweeping in its ideological embrace. The more pragmatic right-wingers, including many who live in West Bank settlements and are fans of Bennett from when he served as the leader of the settlers’ main lobbying organization, look to be enthusiastic about giving Bennett a chance (even as others protest outside his party members’ homes, expressing outrage at his betrayal of Netanyahu).

On some level, it is precisely Bennett’s enigmatic stance on whether or not he would join Netanyahu — under whom he had previously held senior positions as minister of defense, education and economy— that elevated him to kingmaker even though he won far fewer seats than Lapid.

Now some of the far-right and ultra-Orthodox parties whom Netanyahu has had wrapped around his finger for years will have a difficult time rejecting Bennett, an Orthodox Jew with a yarmulke who could hardly be called a dove of any stripe. The business community can’t help but be impressed with his success in high-tech, and the diplomats love his native-level English (his parents immigrated to Israel from the U.S.).

At the same time, Bennett, who would be prime minister of the new unity government until Lapid takes over in 2023 — if the government lasts that long — has tended to embrace the notion of conflict management rather than conflict resolution and has gone on record as being opposed to a two-state solution in which Palestinians agree to peace with Israel in exchange for a country of their own. Given his maximalist territorial stance, any major advances with the Palestinians are unlikely.

Still, the Israeli unity around the need for government change after four elections in two years and the renewed recognition that Israel’s conflict with the Palestinians needs tending to, paired with a still-new administration in Washington, means there may well be room for some efforts to move forward in the Israeli-Palestinian peace process.

The Palestinians, meanwhile, will also have a key role in deciding whether to seize the moment of post-Netanyahu dynamism to reach beyond the narratives that have led to deadlock for decades. The older, more famous Abbas — Palestinian Authority leader Mahmoud Abbas (no relation) — will have an opportunity to engage with the new Israeli government as he never could when Netanyahu held the reins.

If Abbas, who himself has been in power since 2005, can find a way forward that wins more hearts and minds than Hamas’ rocket arsenal — or name a successor who can — then the tired lines about being stuck in an insoluble conflict will be as dated as Teflon.