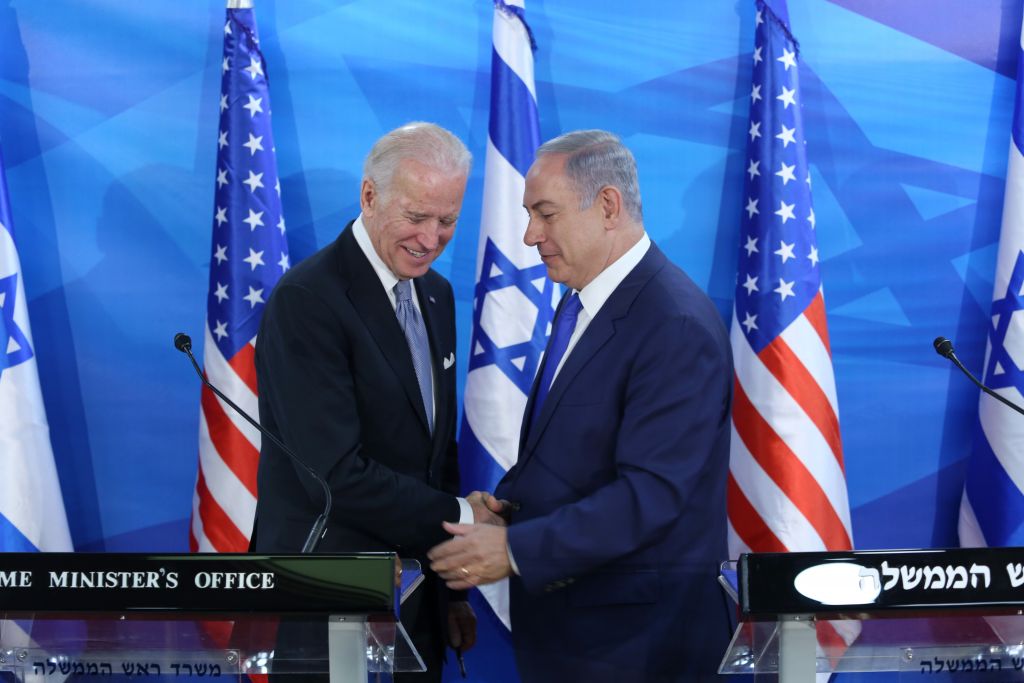 FILE PHOTO : president Joe Biden and Israeli PM Benjamin Netanyahu . Biden faces an angry rift in his own party over Israeli-Palestinian conflict. After Biden on Wednesday uttered the often-repeated mantra that Israel has a right to defend itself, liberals lashed out on the floor of the US House of Representatives. “Do Palestinians have a right to survive?” asked New York Rep. Alexandria Ocasio-Cortez in a fiery speech on Thursday. The progressive Democrat continued to speak out on Twitter this weekend, writing, “If the Biden admin can’t stand up to an ally, who can it stand up to? How can they credibly claim to stand for human rights?”
Share:

Analysis by Zachary B. Wolf, CNN

(CNN)So much attention has been focused on the rift in the GOP over former President Donald Trump’s antidemocratic lies about the 2020 election. But Democrats have their own brewing disagreement over how the US should react to violence between Israelis and Palestinians, leading Democrats to question President Joe Biden‘s commitment to human rights and demanding he do more to pressure Israel.

It’s an awkward public fight for a party that has made its commitment to social and racial justice a main part of its platform. As the US comes to grips with its own history of racism in new ways and adopts the Black Lives Matter movement in a mainstream way, liberals want to apply similar notions of justice to foreign policy, where an increasing number see apartheid in Israel’s approach to the Palestinians.

Vocal liberals have criticized the White House for placating Israel and ignoring human rights as violence mounts, as well as loudly criticizing Biden for not openly opposing Israel’s planned evictions of Palestinian families from a neighborhood in east Jerusalem.

Biden spent much of Saturday preparing for and placing telephone calls to leaders in the region — including his second call in a week to Israeli Prime Minister Benjamin Netanyahu and his first phone call as president to Palestinian Authority President Mahmoud Abbas — suggesting deep engagement on the issue by Biden.  He raised concerns about the safety of journalists after an Israeli airstrike razed a building in Gaza that housed the offices of the Associated Press.

But liberals want more than engagement, they want him to call out Israel.

Subtle shifts in language in readouts of the calls underscored the White House’s new worries, but Biden has, in his public remarks at least, stayed deferential.

“One of the things that I have seen thus far is that there has not been a significant overreaction,” the President said at the White House last week.

The intensifying violence in Israel has assumed new urgency at the White House, according to officials, as Biden and his aides are growing increasingly worried about the rising civilian death toll. Israeli airstrikes have killed more than 130 people and injured at least 1,000 others in Gaza alone, the Palestinian Health Ministry in Gaza said. Rioting and mob violence between Arabs and Jews marred cities and towns throughout Israel.

Biden has spoken and been briefed by senior level aides, but, ultimately, officials acknowledge the President’s ability to broker a ceasefire on his own is limited. Officials say as the violence between Israelis and Palestinians stretches into another week, he is keeping very close tabs on developing efforts by regional partners — including Egypt and Qatar — to broker a ceasefire.

Officials said what happens over the next 72 hours will prove critical in terms of how and whether to ramp up pressure to end the hostilities.

After Biden on Wednesday uttered the often-repeated mantra that Israel has a right to defend itself, liberals lashed out on the floor of the US House of Representatives.

“Do Palestinians have a right to survive?” asked New York Rep. Alexandria Ocasio-Cortez in a fiery speech on Thursday. The progressive Democrat continued to speak out on Twitter this weekend, writing, “If the Biden admin can’t stand up to an ally, who can it stand up to? How can they credibly claim to stand for human rights?”

Michigan Rep. Rashida Tlaib responded on Saturday to the attack on the building housing international media. “Israel targeting media sources is so the world can’t see Israel’s war crimes led by the apartheid-in-chief Netanyahu,” she tweeted, referring to Netanyahu.

Sen. Chris Van Hollen, a Maryland Democrat who serves on the Foreign Relations Committee, has said the planned evictions violate international laws and all but questioned the administration’s commitment to human rights.

“If the Biden Administration puts the rule of law and human rights at the heart of its foreign policy, this is not a moment for tepid statements,” he tweeted earlier this month, linking to comments from the United Nations High Commissioner for Human Rights.

Sen. Bernie Sanders, a Vermont independent who lost the Democratic presidential nomination to Biden, wrote an op-ed in the New York Times on Friday entitled, “The U.S. Must Stop Being an Apologist for the Netanyahu Government.”

“We cannot in good conscience celebrate Eid with the Biden Administration while it literally aids, abets and justifies the Israeli apartheid government’s indiscriminate bombing of innocent men, women and children in Gaza,” CAIR said in a statement that warned Biden he risks damaging his relationship with American Muslims.

Muslim rights groups had hailed Biden in the first days of his presidency for ending the Trump administration’s ban on travel from predominantly Muslim countries.

In a statement Friday casting forward to the White House’s celebration of Eid, the Muslim religious festival, Biden tempered his comments from earlier in the week.

“Palestinians — including in Gaza — and Israelis equally deserve to live in dignity, safety and security,” he said, recognizing Palestinians without criticizing Israel.

Liberal Democrats have long opposed US policy toward Israel and progressives have become more vocal calling for new tactics, like demanding policy changes in exchange for the large amounts of military aid the US provides.

“By continuing to provide military aid without restriction, we provide no incentive for Israel to adjust course,” Massachusetts Sen. Elizabeth Warren said in April, in remarks to the liberal pro-Israel group J Street.

Sanders went further in the New York Times on Friday.”

In the Middle East, where we provide nearly $4 billion a year in aid to Israel, we can no longer be apologists for the right-wing Netanyahu government and its undemocratic and racist behavior. We must change course and adopt an evenhanded approach, one that upholds and strengthens international law regarding the protection of civilians, as well as existing U.S. law holding that the provision of U.S. military aid must not enable human rights abuses.”

Not being Trump is not enough

Biden’s approach, while it leaves much for fellow Democrats to criticize, is a far cry from Trump’s all-in for Israel approach, which he used to his political advantage with Christian voters.

Trump moved the US embassy to Jerusalem, a controversial move that angered Palestinians. Biden chose not to move the embassy back.

Netanyahu, who at the same time as this flareup has also been unable to form a new government and may see yet another general election as his best chance of staying in power, was a booster of Trump’s Middle East policy and a chief international critic of the Iran nuclear deal, which Trump ended and Biden is trying to resurrect.

Simply not being Trump represents a policy change in itself.

“We need to end this conflict,” Rep. Eric Swalwell, a California Democrat, told CNN Saturday, talking about the current violence.

“Thank God we have a responsible president now in the United States, who I think can press upon the Israeli leader the need to do that.”

Sanders used the same language he might use to describe Trump to describe Netanyahu.”Over more than a decade of his right-wing rule in Israel, Mr. Netanyahu has cultivated an increasingly intolerant and authoritarian type of racist nationalism,”

Sanders wrote, although he also criticized the Palestinian Authority as “corrupt and ineffective.””With a new president, the United States now has the opportunity to develop a new approach to the world — one based on justice and democracy,” Sanders wrote.