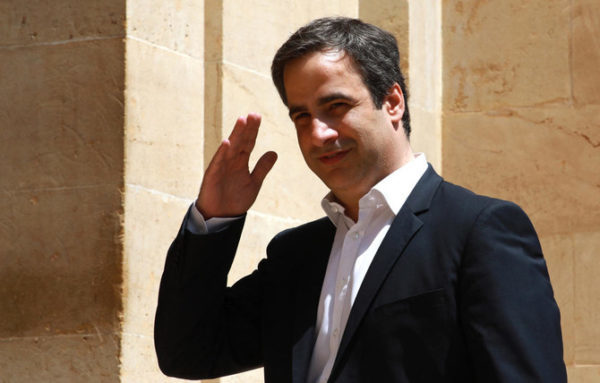 Moawad called for “the formation of a clear, capable and united opposition to face the mafia and the militia.” (File/AFP)
Share:

BEIRUT: Christian parties in Lebanon called for the collective resignation of Parliament on Wednesday, accusing Hezbollah of dominating the country.

The head of the Independence Movement, Michel Moawad, a resigned MP and son of former President Rene Moawad, said at a press conference: “With each passing day, we are more convinced that we are dealing with a criminal, corrupt and conspiratorial authority.

“The Lebanese are paying the price of the coexistence between the state and the statelet,” he added, demanding Hezbollah “leave us alone.”

Moawad, who resigned from Parliament following the Beirut Port explosion on Aug. 4, noted that “retaking the state from the mafia and the militia happens through the restoration of sovereignty over all our borders and regaining control over the decision making.

After meeting Maronite Patriarch Bechara Al-Rahi, the parliamentary bloc of the Lebanese Forces’ MPs renewed their calls for the holding of early parliamentary elections.

Sethrida Geagea MP expressed her support for Al-Rahi’s call for neutrality. “Our country is a small one located in a troubled region. It was not wise to place it in the middle of the region’s conflicts, leading to it being completely isolated from its Arab surroundings and its international friends.

“There is no hope from any government that the ruling majority forms because, even if formed, it will be an exact replica of the ones that came before, which means that true reforms are not an option with this majority. The solution resides in reproducing the ruling class in order to put an end to this parliamentary majority’s hegemony over the country following the disastrous situation they lead us to. This can be done through the only practical step available, which is the holding of early parliamentary elections.”

The Kataeb Party’s political office stressed that “the prevailing state of chaos confirms the blatant collusion between the mafia and the militia, which is aimed at turning Lebanon into a failed state, dragging it into agendas that serve foreign interests at the expense of the country’s identity and historic role, and isolating it from countries that can help it overcome the current crisis in order to further stifle it.

“The situation will not change as long as Lebanon has a parliament that has surrendered to Hezbollah’s will, is unable to prevent violations and has lost its national legitimacy.”

Camille Chamoun, new head of the National Liberal Party, added “Lebanon is in trouble.”
Arab News asked the former opposition MP Fares Saeed if the steps being taken by Christian political parties are an attempt to establish a new Lebanese Front in the face of the authorities and Hezbollah, which would be similar to the Lebanese Front that was established during the civil war.

“The steps taken by these parties are natural. However, I think that the main goal should be to put an end to the Iranian occupation of Lebanon, and anything else would be less than what is required,” Saeed answered.

“What is required is for Hezbollah to hand over its weapons in line with the constitution and the resolutions of international legitimacy. This solution is not feasible currently, which is why Al-Rahi called for an international conference to be held to ensure Lebanon’s neutrality. This is a serious proposition that could lead us to the desired solution. Late Patriarch Nasrallah Sfeir demanded the departure of the Syrian forces that were occupying Lebanon in 2000. This demand was fulfilled in 2005,” he added.

Regarding the Free Patriotic Movement’s position in light of the Christian parties’ call to restore Lebanon’s sovereignty away from Hezbollah, Saeed said there is no doubt that Hezbollah still has a lot of supporters among the Christians due to the alliance in place. “If this alliance is broken, the political scene could change.”