3 reasons the US must help Lebanon avoid total collapse 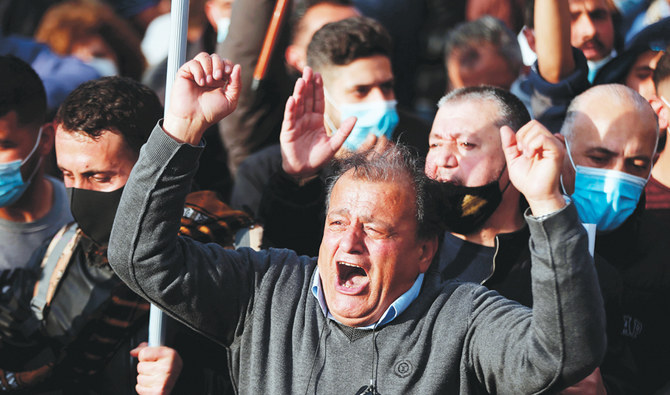 Lebanese soldiers block protesters on the road leading to the Presidential Palace in Beirut on Saturday amid unrest over a steep depreciation of the currency. (AFP)
Share:

In a last-ditch effort to wake up Lebanon’s political leadership, Undersecretary of State David Hale recently visited Lebanon to underscore the urgent need for a reform-minded government before the country becomes a fully failed state. Upon his departure, he said, “(The Lebanese are) suffering because (their) leaders have failed to meet their responsibility to put the country’s interests first and to address the mounting socio-economic problems … but it’s not too late.”

Unfortunately, Hale’s plea appears to have fallen on deaf ears. Joblessness, lack of access to basic health care, and inability to feed their families are factors that continue to erode the lives of hundreds of thousands of Lebanese citizens.

Lebanon’s leaders apparently cannot be convinced to quit their sectarian and self-serving bickering over an economic rescue plan or a new government. Although Hale said it’s not too late to form a government capable of addressing the citizenry’s needs, it is becoming increasingly evident that the country could face financial collapse within weeks.

Now is the time for the Biden administration to switch gears to protect U.S. interests in Lebanon. Three immediate actions would be wise:

First, it is imperative that the U.S., along with the French and others, outline a plan that assures the Lebanese people that the world has not forgotten them and is prepared to assist them, the International Monetary Fund, and other partners with a recovery program — once an effective government is put in place.

Second, the U.S. should lead the international community in a large-scale humanitarian effort to address the hunger, health and joblessness of the most vulnerable in Lebanon. We should do this without utilizing government entities, where corrupt officials, including Hezbollah, can siphon off aid.

A failed state in the Levant and on the Eastern Mediterranean is not in the interest of the U.S. and its allies. The only winner in such an outcome would be Iran and its proxy, Hezbollah. Given the catastrophic economic situation in Lebanon, Hezbollah senses the country’s imminent demise and has established a humanitarian relief effort for groups sympathetic to the Iranian cause. It does not advance U.S. and allied objectives in Lebanon to have only one part of the population offered assistance during this time of need, while others, who share our values, are ignored.

Third, Lebanon is critical to U.S. security interests. The only Lebanese institution left standing that can make a difference in stabilizing the country is the Lebanese Armed Forces (LAF), which the U.S. Department of Defense has cited as one of America’s best military partners in the region. It is in our vital interest to support a strong Lebanese military. According to the State Department, “The Lebanese Armed Forces has greatly increased its capability as a fighting force against violent extremists.” Given that Iran-backed Hezbollah forces sit on the border with Israel, and threaten security in the eastern Mediterranean, the strength and deterrence of the LAF is vital to U.S. interests.

As Hale said in reference to his concerns for the past two years, “I heard then an unmistakable call for change from Lebanese from all backgrounds. These demands are universal: for transparency, accountability, and an end to the endemic corruption and mismanagement that have caused such hardship.”

U.S. discussion with Lebanese politicians has proven to be unproductive. Although it must keep up the pressure on current officials to not neglect the needs of the Lebanese people, the U.S. also should insist — as a precondition to any assistance — that parliamentary elections, scheduled for May 2022, proceed as constitutionally mandated. Through those elections, the Lebanese public, in wide-scale revolt since October 2019, will have the chance to bring about a change in leadership and governance.

It is with the Lebanese people and new leaders that the U.S. can help to build a more prosperous, stable and democratic nation, one that reinforces the shared values and interests of the U.S. and Lebanese people.

Edward Gabriel is the former U.S. ambassador to Morocco, 1997-2001, and currently president of the American Task Force on Lebanon.