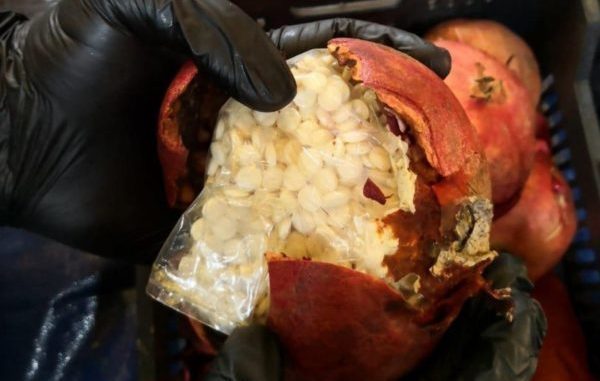 Captagon pills were hidden inside pomegranates that came from Lebanon. Saudi customs at Jeddah Islamic Port foiled an attempt to smuggle the drugs into the kingdom. The Iranian backed Hezbollah militant group was accused of being behind the criminal activity. Lebanon does not export any pomegranates. Lebanon imports its pomegranates from Syrian with whom Hezbollah has good relations
Share:

JEDDAH: The Kingdom has banned the import and transit of fruit and vegetables from Lebanon after authorities on Friday foiled two drug smuggling attempts.

Customs at Jeddah Islamic Port seized more than 5.3 million Captagon pills that were hidden in a pomegranate consignment, the Saudi Press Agency (SPA) reported.
“A consignment was seized upon its arrival from Lebanon and they managed to find 5,383,400 Captagon pills skillfully hidden inside pomegranates,” said Mohammed bin Ali Al-Nuaim, deputy for security affairs at the Saudi Customs Authority.
The entire consignment and the person who was supposed to receive it were caught in cooperation with the General Directorate of Narcotics Control.
Al-Nuaim said that customs employees would continue their efforts to protect the country from drug smuggling.

Narcotic control teams, in cooperation with customs, also foiled an attempt to smuggle over 2,466,563 amphetamine pills. These came from Lebanon and were also hidden in pomegranates.

“Lebanese products are being used to smuggle drugs into the Kingdom’s territory, either through consignments intended for Saudi markets or those that transit through the Kingdom on their way to neighboring countries,” SPA reported, adding that the most common products used to smuggle drugs were fruit and vegetables.
The ban will stay in place until Lebanese authorities provide guarantees that they will take the necessary measures to stop such operations. The Ministry of Interior will follow up and monitor consignments of other products coming from Lebanon to see whether similar measures need to be taken against them.
Interior Minister Prince Abdul Aziz bin Saud bin Naif warned that the Kingdom’s security was “a red line.” According to Al-Arabiya English, Lebanese officials quickly pledged to do more to combat drug smuggling following the ban.
Reuters news agency reported Lebanese Agriculture Minister Abbas Mortada as saying that the issue was very serious, especially if it negatively affected the rest of the Gulf states that could take similar or stringent measures.
Mortada said that Lebanon’s fruit and vegetable trade with Saudi Arabia was worth around $24 million per year.
A Twitter hashtag denouncing drug smuggling from Lebanon into the Kingdom has been trending since the ban was announced, with many posts accusing the Iranian backed Hezbollah militant group of being behind the criminal activity.

This is not the first time such smuggling operations were foiled

Last December the Italian authorities revealed that about 15 tons of Captagon amphetamine had been seized. After researching its origin, it appeared that the Lebanese Iran-backed Hezbollah was also behind it, reported the Italian Nova news agency on Dec 25, 2020. The seizure in Italy was worth $1.1 billion

Hezbollah reportedly exports tons of the amphetamine-based drug Captagon throughout the Middle East and Europe, most of it produced in Hezbollah-controlled areas of Lebanon and Syria.

In 2011 a US Drug Enforcement Administration investigation highlighted the role of Hezbollah operative Ayman Jouma (still at large) in shipping an estimated 85 tons of cocaine into the US and laundering over $850 millionin drug money through various front companies, including the Lebanese Canadian Bank. Jouma’s labyrinthine trafficking network stretched from Panama and Columbia, via West Africa and back to Lebanon.