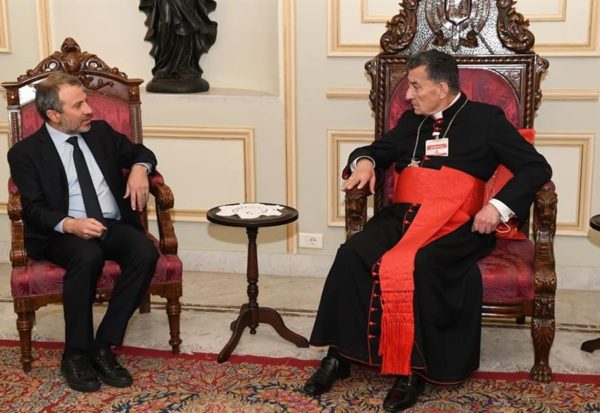 Bkirki, the headquarters of Cardinal Mar Beshara Boutros Al-Rai, categorically denial the rumors of approved of Gebran Basil’s proposals and his position by patriarch Rai , stressing that his eminence has consistently favored the formation of a government of independent specialists.

While PM Designate Saad Hariri was meeting in the Vatican with Pope Francis ,the Free Patriotic Movement leader decided to visit Bkirki

Bassil reportedly wanted to send a message to Hariri, on the eve of his meeting with the Supreme Pontiff, that what the PM -designate is doing is inconsistent with the Christian interest and his reception should not be welcome.

While Pope Francis backed Hariri over the quick formation of the cabinet , Rai did not back Bassil’s position which calls for a blocking one third share in the cabinet

The Pope urged all Lebanese political leaders to “urgently commit themselves to the benefit of the nation,” as the country endures a series of crises and disagreements that have prevented the formation of a government.

Francis also reaffirmed during the 30-minute audience his desire to visit Lebanon as soon as conditions permit, according to a statement from the Vatican spokesman.

“This is a message to all Lebanese and all parties that we have to hurry up in the formation of a government,” Hariri told Lebanese reporters traveling with him after the audience. “The pope sees Lebanon as a message of neutrality and coexistence.”

Hariri’s visit to the Vatican comes as Lebanon is experiencing its worst economic and financial crisis in its modern history following decades of widespread corruption. Since late 2019, the local currency has lost 90% of its value, and more than half of the country’s population now lives in poverty, according to the World Bank.