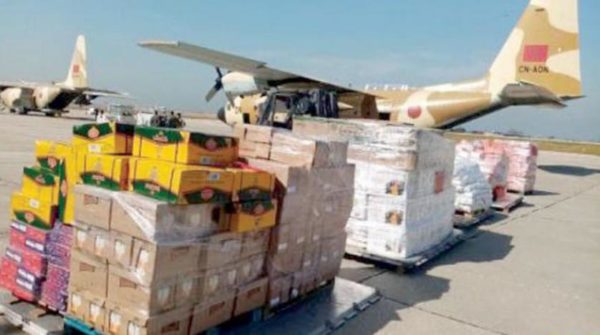 The aid was received by Moroccan ambassador to Lebanon Mohamed Karin and members of the embassy, in addition to a representative of the current Commander in Chief of the Lebanese Armed Forces.

The shipment was the first of eight military planes delivering basic food products to Lebanon.

King Mohammed announced he would personally fund the large donation of aid.

The 90 tons of food aid will go to citizens and Lebanon’s armed forces as the country endures its worst economic crisis in decades, which was exacerbated by the coronavirus pandemic.

The Royal family of Morocco is well connected with a prominent Lebanese family . The late Prince Moulay Abdellah of Morocco was married to Lamia el Solh , daughter of the late PM of Lebanon, Riad el Solh