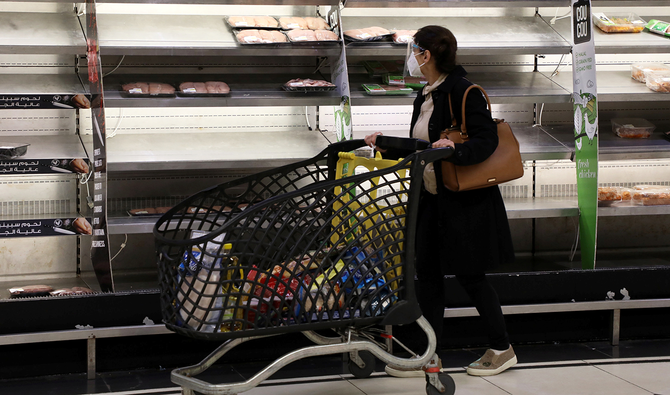 A shopper walks past near-empty shelves at a supermarket in Beirut. (Reuters)
Share:

Once night falls on the village of Al Qasr in north-east Lebanon, smugglers lay makeshift steel bridges across the small stream separating it from Homs province in Syria and take across everything from flour to aspirin and fuel in lorries and four-wheel drives.

“There is nothing we cannot sell to Syrians. They are starved of everything,” says Ahmed, 25, one of hundreds of Lebanese living on the border who make a living ferrying goods into Syria.

Ahmed supports his three children by carrying flour and fuel into Syria every week in his pickup truck.

“At one crossing in Al Qasr the smuggler chief can carry up to 100 tonnes of flour and a thousand gas containers per night,” he told The National by phone from his village near Al Qasr deep in the Hermel district.

Before Syria’s civil war began in 2011, cheap Syrian clothing, fuel and produce were smuggled from Syria into Lebanon. Now, fuel, flour and other subsidised goods flow the other way from areas controlled by Hezbollah, the Lebanese party and militia that is allied to the Syrian regime.

But Lebanon itself is struggling to subsidise basic goods in the face of the country’s worst economic crisis, the coronavirus pandemic and a plunge in the value of the local currency.

Ordinary Lebanese say the increased smuggling into Syria is depleting scarce foreign currency reserves and creating shortages and the hoarding of subsidised products in Lebanon.

Demand for smuggled fuel in Syria increased after a container ship ran aground in the Suez canal on March 23 and blocked the channel for nearly a week. Last week the Syrian government began rationing fuel, limiting sales to taxis in Damascus to just 20 litres every four days.

Milad Matar, 62, who operates a small generator business in the Lebanese Christian border town of Al Qaa, said shortages spurred by smuggling and the depreciating local currency had forced him to to pay more for fuel on the black market.

“Instead of making a 1,000 Lebanese pound profit on each gallon by selling fuel oil to Lebanese, smugglers can make a 5,000 pound profit if they sell it in Syria,” he said.

“So of course when Lebanese citizens go to the gas station they find there is no more fuel.”

One tonne of high-quality Lebanese flour is costs about 1.5 million pounds in Lebanon but can be sold on the other side of the border for more than 2 million pounds.

Lebanese villagers living along the border constitute a large part of the smuggling trade but say the large-scale movement of contraband is the preserve of well-connected and politically backed clans.

“I have to beg the chief smuggler to get a few tonnes of flour across to Syria,” Ahmed said. “It’s humiliating, but the crossing is his territory.”

The Hezbollah-controlled Baalbek-Hermel region where Ahmed lives is home to ancient ruins, rich agricultural lands and trout fisheries, but is most widely known for its lawlessness. Powerful clans backed by Hezbollah and its Shiite ally, the Amal Movement, whose green flags fly on houses, streets and bridges in the Bekaa Valley, have long engaged in criminal activity. Their record ranges from car theft and personal vendettas to the production and traffic of narcotics — and of course, smuggling.

Damascus considers Lebanon an extension of its territory and has consistently refused to demarcate the borders that bound its smaller neighbour to the north and east, stretching along 369 kilometres of dry and mostly mountainous terrain.

As a result, contraband has for decades sustained the economy of the Baalbek-Hermel district. It has also provided the Syrian regime, propped up by Hezbollah fighters and foreign governments since the early years of the war, with precious supplies at a time when international sanctions, war and economic strife have limited imports.

A Syrian businessman, who spoke on condition of anonymity, explained that a collapse of the Syrian pound over the past year, which intensified last month, and severe shortages of basic goods have raised demand for subsidised products from Lebanon.

These goods can be sold at higher prices in regime-held areas, where people queue for hours for a bag of subsidised bread or a container of fuel.

“Everything from French butter that is subsidised in Lebanon to bread made of smuggled flour has appeared on the shelves,” he said.

Meanwhile, Lebanon faces price hikes driven by the freefall of its currency, making affordable, subsidised goods all the more coveted.

To counter smuggling and prevent militants from entering, the Lebanese army has deployed 24-hour patrols, aided by radar and watchtowers flanking the Anti-Lebanon mountains that overlook Syria.

After the beginning of the Syrian civil war, militant incursions wreaked havoc along the porous border. ISIS briefly overtook the northern town of Arsal in 2014 and attacked Al Qaa a few years later, forcing the Lebanese army to redouble its presence on the border.

The US and European countries granted the Lebanese army hundreds of millions of dollars in financial and material aid. Despite this, the army remains caught in a game of cat and mouse with local smugglers.

Capt Mohamed Barraj of Lebanon’s land border army division spends his days patrolling the border with his men. They have closed down smuggling routes, confiscated merchandise and even engaged in armed encounters with local clans.

“The army is working hard to stop the smuggling,” he said, pointing at a recently closed smuggling route ending metres from a Syrian checkpoint.

As he commanded his soldiers across the border town of Hawch El Sayyed Ali near Al Qasr, a man jumped into a river to evade them while another ran away, leaving behind a bag filled with two dozen cans of beer that the soldiers said was about to be smuggled.

A woman also followed the patrol in a car, speaking into a telephone. Soldiers suspected that she was spying on them for a local clan.

“This is what we deal with every day from the local community,” one soldier told The National.

“They even have WhatsApp groups to keep track of the patrols. We have to keep changing our routes to stay one step ahead.”

Solidarity among residents, many of whom belong to local clans involved in organised crime, has impeded the army’s work.

Ali, a 22-year-old clan member in Hermel, said his peers have a deep sense of loyalty to one another.

“Whenever the army catches someone involved in criminal activity, clan members block roads so that they let him go,” Ali said.

He said the crossings are operated by the clans on a rotating basis, with separate families responsible for them at specific times.

Some of the crossings are simply dirt roads leading to Syria, others are the steel bridges laid over streams.

The uniformed Lebanese soldiers patrolling the border in armoured vehicles stand in sharp contrast to their Syrian counterparts.

Concrete barracks with scrap metal and rock roofs dot the border on the Syrian side, along with checkpoints manned by dishevelled soldiers, dressed in sneakers and keffiyehs — the traditional headdress of shepherds.

Bashir Matar, the head of Al Qaa municipality, said he does not trust the Syrian army to halt the smuggling.

“Syria benefits from smuggling, but why should Lebanese have to pay so that a well-connected Lebanese-Syrian mafia continues to profit on our backs?” he asked.

A regional security source and a smuggler both told The National that local clans use their connections with Syria’s elite Fourth Armoured Division and the regime’s Lebanese allies to smuggle large quantities of goods.

“The Fourth Division has a monopoly over bribes and taxes at the borders of region-held areas,” the source said, referring to the elite army division is commanded by Maher Al Assad, Syrian President Bashar Al Assad’s brother.

“There is a clear policy on the Syrian side: smuggling is allowed because of the economic situation,” he said.

“There is even a term for it. Smugglers ‘buy the road’ for a few hours, or overnight. The arrangement is that the border guards look the other way during that time,” he added, noting that Hezbollah controlled the borders on the Lebanese side.

Three Lebanese army sources denied that there was a similar arrangement on their side of the border. The National could not independently verify these claims.

Former Lebanese defence minister Elias Bou Saab said in 2019 that “smuggling up to $2.5 billion does not take place through illegal crossings”, hinting at severe shortcoming on the Lebanese army’s side.

A senior army source who denied the military’s involvement in the smuggling, said the armed forces face an impossible task as long as there is no incentive in Beirut and Damascus to delineate the border.

“Every time the army closes a crossing, smugglers open another one,” he said.

“Even if you put a soldier on every inch of the border, it will never be enough. On the ground, there are no borders.”