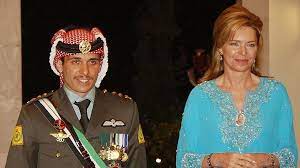 The widow of Jordan’s late king on Sunday defended her son, former Crown Prince Hamza Bin Hussein, against allegations by the authorities that he carried out actions targeting “security and stability” in the kingdom.

The head of the armed forces visited the prince on Saturday and warned him over actions that people familiar with the matter said could be related to a plot to destabilise Jordan, and several high-profile figures were detained.

Jordan’s neighbours and allies expressed solidarity with King Abdullah over the security measures in the kingdom, an important ally of the United States.

Prince Hamza said in a video recording he was under house arrest and had been told to stay at home and not contact anyone, and Queen Noor, the widow of late King Hussein, said the authorities’ accusations against him were slander.

“Praying that truth and justice will prevail for all the innocent victims of this wicked slander,” she wrote on Twitter. “God bless and keep them safe.”

Prince Hamza was dismissed as heir to the throne in 2004 by King Abdullah, his half-brother, in a move that consolidated the monarch’s power.

Although he has been sidelined, Prince Hamza has angered the authorities by building ties with disgruntled figures within powerful tribes.

Speaking in English in the video recording, passed by his lawyer to the BBC, Prince Hamza said the country’s leaders were a corrupt few who put their interests above the public.

A security investigation has been launched and a former minister, a junior member of the royal family and unnamed others have been detained.

Jordan is seen as one of the most stable countries in the Middle East. Echoing statements of support by other allies and neighbours of Jordan, Morocco’s King Mohammed VI held a phone call with King Abdullah II in which he expressed solidarity and support for the country’s security measures, Morocco’s royal palace said on Sunday.

Some opposition figures have rallied around Prince Hamza, in a move that has displeased the king, officials familiar with the situation said.

Prince Hamza had been groomed from childhood by his mother to become a king and has taken many of his late father’s public behaviour and language, endearing himself to some Jordanians who are nostalgic for King Hussein’s long decades of rule.