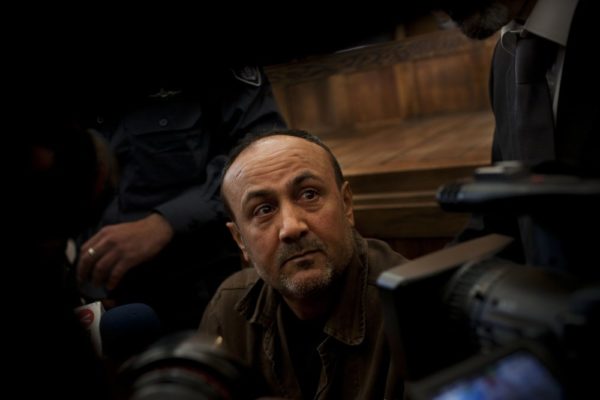 The popular Jailed Palestinian leader Marwan Barghouti decided to challenge Fatah leader President Mahmoud Abbas in the upcoming May 22 parliamentary elections by announcing a rival slate of candidates to run against his own Fatah party.
Share:

RAMALLAH, West Bank (Reuters) – Jailed Palestinian leader Marwan Barghouti threw the May 22 parliamentary elections into turmoil on Wednesday by announcing a rival slate of candidates to run against his own Fatah party.

Barghouti and Nasser Al-Qudwa – a nephew of the party’s late founder and figurehead Yasser Arafat – laid down a direct challenge to Fatah leader President Mahmoud Abbas by registering their own list which they called “Freedom”.

The breakaway group was headed by Qudwa and Barghouti’s wife Fadwa, who both arrived at the Central Election Commission headquarters in the West Bank city of Ramallah an hour ahead of the midnight registration deadline.

But Barghouti, 61, was not among the names – fuelling speculation that he may be preparing to run against Abbas – who is 85 and in poor health – in a presidential election in July.

Hani al-Masri, a candidate on the new slate, said the aim of Qudwa and “brother and leader” Barghouti was “to bring about the change that the Palestinian people need.”

Fatah internal divisions were a key factor in the party’s loss to its Islamist rival, Hamas, in the last round of parliamentary elections in 2006.

That surprise defeat led to a bitter power struggle culminating in a civil war that divided the occupied Palestinian territories, leaving Hamas in control of Gaza and Fatah with its power base in the West Bank.

Barghouti’s move is likely to intensify concern among Fatah’s leadership that internal splits will once again lose it seats.

It was unclear whether Abbas would punish Barghouti, a former West Bank Fatah official and parliamentarian who is serving life imprisonment in Israel after being convicted of orchestrating deadly attacks against Israelis, which he denied.

Qudwa has already been expelled from Fatah, the nationalist faction that has long dominated the Palestine Liberation Organisation.

But Barghouti represents a much more serious challenge to Abbas, who has not faced an election for more than 15 years and whose Palestinian Authority is frequently accused of nepotism, corruption and inefficiency.

In an opinion poll this month 28% of Palestinians said they would vote for a Barghouti-led list compared to 22% for one backed by Abbas, according to the Palestinian Center for Policy and Survey Research. The same poll showed 38% support for Fatah; 22% for Hamas and 29% not expressing a preference.

“It will disrupt and confuse the list of the mainstream Fatah movement,” said Gaza-based political analyst Talal Okal.

“The Fatah Central Committee may find itself faced with serious decisions, such as whether to expel Barghouti as they did with Qudwa.”

Hamas already submitted its list of 132 candidates earlier this week, and Fatah submitted its own slate just before the deadline.