Nasrallah: Time to have a government to rescue Lebanon 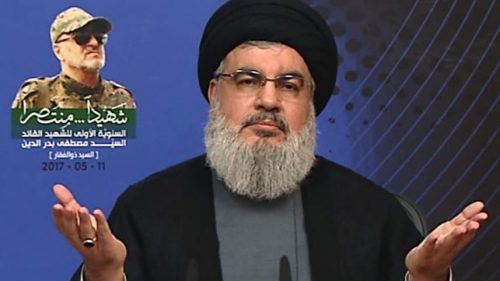 This file image from May 11, 2017 shows Hassan Nasrallah giving a televised address marking the 2016 death of Mustafa Badreddine, a suspect in the 2005 assassination of former Lebanese PM RafikHariri AFP PHOTO / AL-MANAR TV
Share:

BEIRUT, Lebanon – Hezbollah chief Hassan Nasrallah said Wednesday a serious, collective effort was underway to form a new government that can rescue the country from an unprecedented financial crisis.

“Everyone must know the country has run out of time,” Nasrallah said in a televised speech. He added that there were “serious, collective efforts” in recent days to ease a political standoff that has obstructed Cabinet talks for months.

He also said that all parties agree that the main solution is “the formation of the government.”

“It’s about time we sought real solutions for the problems,” he added.

Nasrallah also quipped that he would avoid talking about Saudi Arabia in his speech in order “not to be accused of obstructing the government’s formation.”

“We must put all things aside and we must quickly resolve the crisis,” he urged.