Lebanon: An economy sliding into devastation 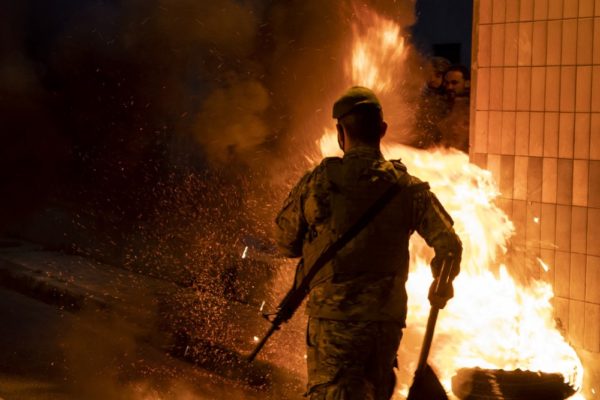 A Lebanese soldier removes burning tires placed by supporters of Prime Minister-designate Saad Hariri to block a road link to Beirut international airport in Beirut, Lebanon, Monday, March 22, 2021. Protesters blocked some roads in the Lebanese capital with burning tires Monday after talks on the formation of a new Cabinet broke down, heralding more economic and financial collapse for the small Arab country. (AP Photo/Hassan Ammar)
Share:

As of March 2021, the historical drop in the Lebanese lira has triggered nationwide protests. Protesters have lost hope, and public rage is escalating as the days go on. The protests and rapid devaluation of the currency have raised the pressure for a new government.

The absence of state authority, an economic crisis, corruption, hunger, blackouts and inadequate inoculation are only a few issues when you consider the current situation in Lebanon. According to most people, Lebanon is facing its worst crisis since the civil war in the country that spanned from 1975 to 1990, and the situation is getting worse.

Lebanon is one of the countries that apply fixed exchange rates. In the first half of 2019, $1 was equal to 1,500 Lebanese liras. In October 2019, the currency shortage caused the lira to depreciate against the U.S. dollar for the first time in 22 years, and a new black market emerged.

The corruption, clientelism, the COVID-19 outbreak, the devastating Beirut explosion, the resignation of Prime Minister Hassan Diab’s government and the escalated economic crisis have pushed Lebanon amid national unrest.

For Christmas and the new year celebrations in December 2020, Lebanese authorities allowed public entertainment venues to open with the intent of reviving its economy and foreign currency inflow from expats. However, this decision boosted positive COVID-19 cases among the country, and authorities had to declare a national curfew in mid-January.

There has also been a deadlock in the government since August 2020. Each unsuccessful trial for forming a new government has escalated the tension and instability. People’s patience is diminishing daily with the accumulated burdens of the economic crisis and national disasters.

Bank accounts have been frozen in Lebanon, and Lebanese banks have put restrictions on outgoing transfers and cash withdrawals of up to $1,000 per month since November 2019.

Since April 2020, Lebanese banks do not give dollars and convert the demanded amount at the rate of $1 for 3,900 Lebanese lira, while the black market rate was more than the $1 for 14,000 Lebanese lira this week.

Lebanon’s import reliance makes things worse, while the inflation is out of control. The country’s central bank is hardly capable of fulfilling its vital functions.

Reportedly, the bank’s reserves are close to $16 billion, while it owes to the banking sector approximately $80 billion.

Also, the extent of blackouts is increasing. The national electricity production dropped dramatically after the Beirut Port explosion. An ordinary Lebanese citizen experiences at least six hours of blackouts and up to 18 hours in some areas.

The pandemic made the current situation even worse. While Lebanon has just entered a new phase in lockdowns, including opening restaurants and cafes, the inoculation rate is still less than 1.5% of the population. This decision is like jumping out of the frying pan into the fire, and the country may face harder days in the near future.

On March 2, 2021, the Lebanese lira recorded 10.80. This was the last straw for many people. The panic of depreciation of the currency led to nationwide protests. Protestors demanding a new government formation barricaded roads almost every day by setting tires and garbage containers on fire in Beirut.

Hope is turning into rage every passing day, but protests and the rapid devaluation of the lira accelerated the efforts for forming a new government. The caretaker Diab pressured the politicians to stop carrying out his duties. He also advised politicians to set aside their differences and form a government for the sake of Lebanon.

Later, Hariri and Aoun held a meeting on forming a government. After the meeting, Hariri said that he saw ‘‘an opportunity to be seized.’’ Hariri also stated that the new government should restart negotiations with the International Monetary Fund (IMF) to halt the economic crisis and regain the international communities’ trust.

Lebanon, with its fragile political atmosphere and alarming economic indicators, made a final attempt to achieve stability. This was probably the last opportunity before an economic collapse. As a result, people tired of the failed attempts to form a government, and criticism of the poor political system are trending.

Many Lebanese demand political reforms that will facilitate government formation and cooperation.

However, one of the main features of this predetermined power-sharing model is political immobilism. Communities do not want to change the status quo and try to protect their shares.

Since the politics and economy have always been related, Lebanon’s economic institutions are directly affected by its political structure.

In other words, political reforms are key to ending the current economic crisis. These reforms should be made by not violating any communities’ share.

Rearranging electoral districts by considering the absence of any communal majority and changing the electoral system to proportional representation would be a healthy and modest solution for the country.

These reforms eventually lead politicians and political parties to be moderate and open to cooperation.

Also, the competition between sectarians may transform into an intra-sectarian competition that will create an obstacle against clientelism and corruption.

The last two years of Lebanon were full of suffering. Following the economic crisis, national disasters and the pandemic, the people are demanding a solution, and they no longer have patience.

The hope and faith for better days still exist (though it is small) for many Lebanese.

In my opinion, there is still hope for this unfortunate and beautiful country. As I mentioned, electoral reforms can mitigate the polarized political atmosphere and solve the instability problem. But before starting to heal Lebanon’s wounds, the formation of a government is necessary.