Syrian-American charged with killing 10 in US mass shooting 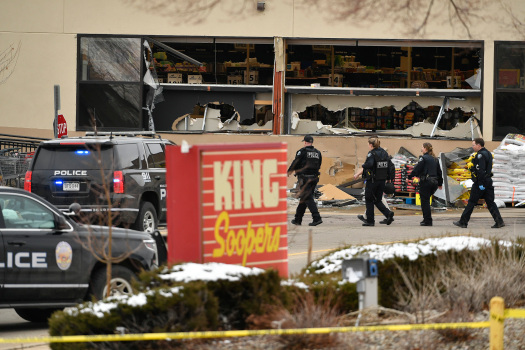 BOULDER, CO -MARCH 22: Law enforcement officers wait outside the broken windows at the front of the King Soopers as they respond to an active shooting at King Soopers on 3600 Table Mesa Drive on March 22, 2021 in Boulder, Colorado. (Photo by Helen H. Richardson/The Denver Post)
Share:

A Syrian immigrant has been charged with shooting dead ten people, including a police officer, in Boulder in Colorado state a the second mass killing in the US within a week.

Boulder Police Chief Maris Herold identified the shooter as Ahmad Al Aliwi Alissa, a 21-year-old man and said that he has been charged with ten murders.
At a news conference on Tuesday, she said that one of those killed was Eric Talley, the police officer who was the first to respond to the shooting on Monday at a grocery shop.
She did not give a motive for the shooting which took place people while people were also being given vaccines for Covid-19 at the shop.
Addressing the nation about the attack, President Joe Biden said, “There’s still a great deal we don’t know about the killer and the motivation of the killer in Boulder, Colorado, and other critical aspects of this mass shooting.”
Alissa said on his Facebook page that he was born in Syria and came to the US when he was three years old.
On the page that has been shut down, he opposed former President Donald Trump, but also criticised gay marriage and abortion rights that Democrats support.
The Daily Beast quoted his brother Ali Aliwi Alissa as saying that the shooting is “not at all a political statement” but the result of “mental illness”.
He told the internet publication that his brother was paranoid and had been bullied in school.
FOX31 TV reported that he had been arrested in 2017 for knocking out a classmate and court records said that he did it because he had “called him racial names weeks earlier”.
TV clips showed Alissa being led away from the shop after the shooting, stripped down to his underwear.
DenverChannel TV station said that according to court papers, he laid down a tactical vest, a rifle that was a “possible AR-15” semiautomatic handgun before surrendering to the police inside the shop and asking for his mother.
According to court papers, he had bought a Ruger AR-556 pistol on March 16 and his sister-in-law told police that she had seen him play with what looked like a machine gun, it said.
A Colorado state judge had struck down earlier this month a ban on assault weapons imposed by Boulder city saying it clashed with the state’s jurisdiction.
Gun ownership is governed mostly by a patchwork of state and local regulations in the absence of comprehensive stringent national laws because of opposition to it mostly from Republicans backed by the powerful gun owners’ organisation, the National Rifle Association.
According to the Gun Violence Archive, 19,380 people were shot dead last year, an increase of more than 25 per cent over the previous year’s deaths.
Monday’s massacre followed a shooting by a White man in the Atlanta region last Tuesday that killed eight people, six of them Asian women, at three massage parlours raising fears of racial violence against Asians.
According to officials the alleged killer, also 21 years old, told them he had a sex addiction and shot the massage places to root out the source of temptation for him.
Democrats blamed Trump for those killings accusing him of contributing to anti-Asian bias by calling COVID-19 China virus and Wuhan virus and using flippant terms like “Kungflu”.
“President Trump clearly stoked the flames of xenophobia against AAPIs (Asian Americans and Pacific Islanders) with his rhetoric,” Judy Chu, a member of the House of Representatives.
Biden’s Spokesperson Jen Psaki also blamed Trump’s rhetoric for those killings.
Vice President Kamala Harris and Biden visited Atlanta to denounce anti-Asian violence. There Biden called for “standing together against hate, against racism, the ugly poison that’s long haunted and plagued our nation”.
Both of them as well as other Democrats now face the task of framing their rhetoric in the Colorado case differently since the alleged killer is not a White person, but the member of a minority community who can’t be linked to Trump.
Biden skirted the race or religion issue saying, “Understandably, you’re going to ask me to speculate on what happened, why it happened. And I’m not going to do that now because we don’t have all the information — not until I have  all the facts.”
But the Colorado shooting opens an opportunity to approach gun violence in a post-Trump era as an issue that is not somehow connected to him. But it may not temper Republican opposition to gun control as it is an ideological issue.
“This is not and should not be a partisan issue, it is an American issue,” Biden said of gun violence and measures to fight it.
He said, “We can ban assault weapons and high-capacity magazines in this country once again.”
The law passed in 1994 lapsed in 2004 and efforts to renew it have met with Republican opposition.
He said that the Senate should immediately pass two bills approved by the House of Representatives to tighten background checks for those buying guns.
The Senate Judiciary Committee held a previously scheduled hearing on “Constitutional and Common Sense Steps to Reduce Gun Violence” on Tuesday, which brought out the political differences between the Democrats and  Republicans on guns.
“We face a pandemic of coronavirus. We have another epidemic in America called guns,” said Committee Chair Dick Durbin, a Democrat.
He asked, “What are we doing, other than reflecting and praying,” as several Democrats called for stricter gun control.
Democratic Senator Richard Blumenthal said that Congress was complicit in the killings because of its inaction and added, “We need to end this epidemic with a comprehensive nationwide approach.”
Republicans take an absolutist view of the Constitution’s Second Amendment giving the people the “right to bear arms” to justify their opposition to gun control.
Chuck Grassley, the Republican leader on the committee said, “Like many Americans, I cherish my right to bear arms.”
Republican Senator Ted Cruz expressed his party’s scepticism over laws to restrict gun ownership saying, “Every time there’s a shooting we play this ridiculous theatre where this committee gets together and proposes  a bunch of laws that would do nothing to stop these murders.”