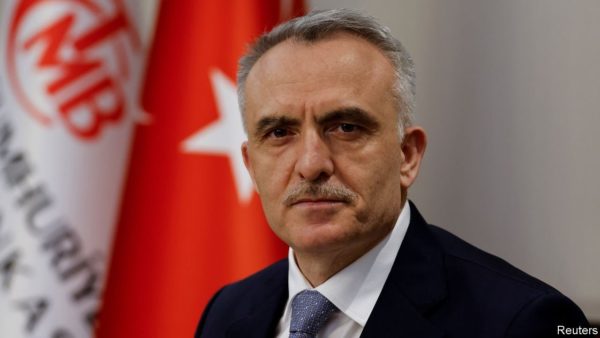 File photo: Naci Agbal, a former finance minister who served as the Central Bank governor of Turkey for 4 months. He had won the praise of investors for hiking interest rates and promising tighter monetary policies. But President Recep Tayyip Erdogan fired him and replaced him with a banking professor who has argued for lower interest rates.
Share:

ISTANBUL (AP) — Turkey’s president has fired the central bank governor, who in his four months in office had won the praise of investors for hiking interest rates and promising tighter monetary policies.

In a decree published in the Official Gazette early Saturday, President Recep Tayyip Erdogan announced the departure of Naci Agbal, a former finance minister. He is to be replaced by a banking professor who has argued for lower interest rates.

Agbal’s most recent hike of 200 points on Thursday took the rate to 19 percent, which was higher than analysts expected. The bank said tight monetary policy would be maintained until inflation, which has hit 15.61 percent, was brought under control.

Erdogan is openly averse to high interest rates, claiming high rates cause inflation, which stands in opposition to mainstream economic theory. He has pressured the central bank to keep rates low to fuel borrowing and growth. Critics say the independence of the central bank has been severely damaged by political pressure.

Erdogan’s decree on Saturday appoints Sahap Kavcioglu as the new central bank head. Kavcioglu is a banking professor and a columnist in a pro-government newspaper where he has argued for low interest rates. He previously served as a lawmaker in Erdogan’s ruling party.

Kavcioglu will be the fourth governor to lead the bank in two years.

Agbal, in a tweet, thanked the president for having appointed him to his previous posts and said: “I’d like to also extend my gratitude for my removal.” He made no further comment.