Aoun calls on Hariri to form Cabinet or step aside 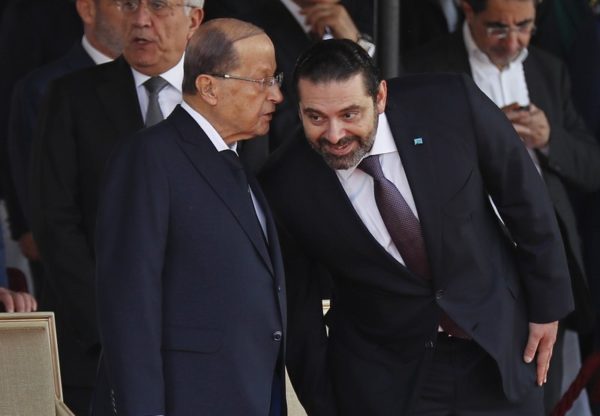 President Michel Aoun ‘s call on PM designate Saad Hariri to meet him at the presidential palace and work together on forming a government or step aside seems to be an an attempt to deflect blame for months-long political battle in which both sides have traded accusations of obstruction. Aoun after all does not have the power to dismiss a premier-designate, chosen by Parliament. Hariri made it clear to Aoun in his response that he will visit him for the 17th time but will be the same lineup of a cabinet of experts that he submitted. before and not politicians

BEIRUT — Lebanon’s president called Wednesday on the prime minister-designate to form a government immediately or step aside as the country plunges deeper into economic crisis.

The intractable political battle comes against the backdrop of an economic crash that is proving to be the most serious challenge to the small country’s stability since its 15-year civil war ended in 1990.

In a televised statement Wednesday, Aoun said that Cabinet lists proposed by Hariri, who was named to the post of premier last October, did not meet the minimum requirements needed to preserve national accord.

Aoun urged Hariri to meet him at the presidential palace and work together on forming a government or step aside if they cannot agree. The call seems an attempt to deflect blame for months-long political battle in which both sides have traded accusations of obstruction.

In response, Hariri tweeted that he was surprised by the president’s televised invitation and instead urged Aoun to approve Hariri’s last list, which he described as consisting of experts and not political nominees.

Hariri also called on Aoun to spare the Lebanese more suffering by allowing early presidential elections, and challenging him to spell out why he has so far declined all Cabinets proposed by the premier-designate.

Aoun was elected to a six-year term by parliament in 2016, after Lebanon had been nearly two years without a president. He is an ally of the Iran-backed Hezbollah group. Hariri, who has worked closely with Hezbollah before, is locked in a power struggle with Aoun’s political party and is under pressure to exclude Hezbollah from a future Cabinet.

Underscoring Lebanon’s complicated balancing act, Hezbollah says it backs Hariri — even as he loses international support amid frustration over the stalemate.

Legally, a president cannot dismiss a premier-designate, chosen by Parliament. It is unclear what would break the stalemate. According to the constitution, the president could suggest names to the prime minister-designate, who is ultimately responsible for forming a Cabinet.

“Shock after shock, each day brings its burdens and worries, and the concern grows because of the inability to have the simplest means for an honorable life,” Aoun said.

Amid the political blame-trading, Lebanon’s local currency continues to crash, losing over 90% of its value since October 2019. The economic crisis has pushed nearly half the population into poverty.

Banks have imposed informal controls on people’s savings, and the Central Bank’s foreign reserves are dwindling in a country dependent on imports of over 80% of its basic needs. Desperate and enraged, Lebanese protesters have turned to the streets to demand a way out of the crisis as prices soar and goods disappear from the market.

But public anger has not spilled into nationwide protests similar to those in 2019 even as Lebanon is being gripped by multiple crises, including a surge in coronavirus infections and pressure on the health sector.