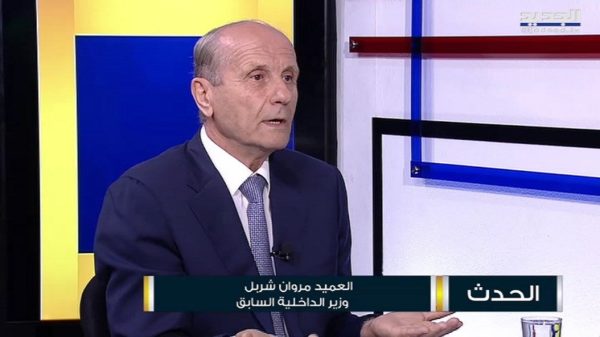 Former Interior Minister Marwan Charbel predicted Tuesday during an interview on Al Jadeed V that 6 Lebanese leaders will be assassinated but refrained from naming them
Share:

Former Interior Minister Marwan Charbel declared on Tuesday: “There are 6 of the most important personalities at risk of assassination in Lebanon, among them are heads of political parties.”

Charbel made the predication during an interview on the Al-Jadid TYV channel.

He revealed that “Bkerke is making an effort to bridge the gap between President Michel Aoun and PM -designate Saad Hariri, and it has reached the yellow light after he was red, waiting for the green light.

Regarding the stalled government formation , Charbel said: “You should not be surprised if you wake up tomorrow and find a government.”

He continued, “Parliament Speaker Nabih Berri told me that Hariri accepted his initiative, awaiting the visit of Major General Abbas Ibrahim to Baabda to present the initiative to President Aoun.”

Charbel revealed that the real obstacle behind the formation of the government is the obstructing third that has has been demanded by certain parties . He emphasized that the statements that are being made available to the media denying the demand for the obstruction third are not true .

Former PM Saad Hariri was chosen late October to form a new cabinet to implement the reforms needed to end the financial crisis but so far political bickering and disagreements between him and President Michel Aoun and his son-in-law MP Gebran Bassil prevented him from forming the cabinet . Bassil who according to analysts is the most despised and disliked politician in Lebanon reportedly wants to be the president and for this reason he is trying to force Hariri to give his FPM bloc a veto power in the cabinet to pave the way for him to replace Aoun as president in 2022 . The Iranian backed Hezbollah militant group which currently controls all the branches of government in Lebanon is reportedly backing Bassil’s plan and for this reason it has done nothing to facilitate the formation of the cabinet .

In 2005 Harri’s dad, former PM Rafik Hariri was assassinated . A Hezbollah operative was indicted in his murder. There were many other assassinations that year and the years that followed of several anti Hezbollah leaders.