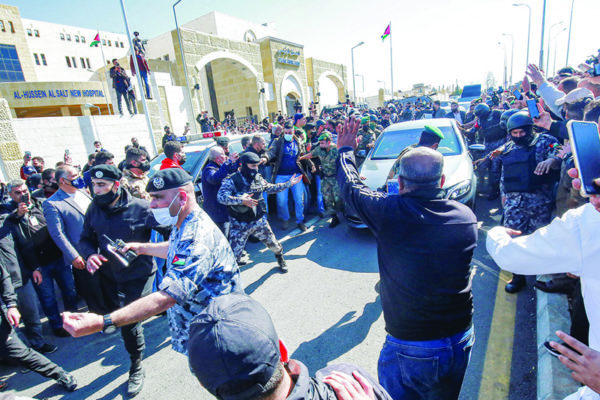 People stand on the side as Jordan’s King Abdullah II arrives in his vehicle at a hospital in the town of Salt, northwest of the capital, on March 13, 2021. – King Abdullah II ordered the head of the state hospital in Salt to resign, state media reported, as hundreds of people gathered outside the hospital to protest the deaths of least six COVID-19 patients after it ran out of oxygen. Jordan’s health minister also resigned following the incident. (Photo by Khalil MAZRAAWI / AFP)
Share:

At least seven Covid-19 patients died Saturday when a Jordanian hospital ran out of oxygen, triggering an outcry in the kingdom and forcing the health minister to resign.

Jordan’s King Abdullah II ordered the head of the state hospital in the town of Salt northwest of Amman to resign, state media reported, as hundreds of angry people gathered outside the hospital.

“Between 6:00 and 7:00 this morning, oxygen ran out for nearly an hour at the hospital and this probably led to the deaths of six patients,” health minister Nazir Obeidat said.

Obeidat, who travelled to the Al-Hussein New Salt Hospital after news of the tragedy broke, told reporters he was assuming “full moral responsibility” for what happened.

“I have submitted my resignation to the prime minister,” he added.

Prime Minister Bisher al-Khasawneh later told reporters he had accepted Obeidat’s resignation and that the hospital’s director had been sacked.

The head of health services for the Balqaa province, where Salt is located, was suspended pending the completion of an investigation, he said.

“What happened is a huge and flagrant mistake, unjustified and unacceptable. We cannot accept the death of a single Jordanian,” Khasawneh added.

“The government alone assumes full responsibility for what happened.”

The king also headed to Salt in the wake of the reports of the deaths and demanded the head of the hospital step down, Al-Mamlaka reported.

In video footage that circulated online, a visibly angry Abdullah, shaking his head and gesticulating, can be heard telling the hospital director: “How could such a thing happen. This is unacceptable.”

Hundreds of people rallied outside the hospital to vent their anger over the deaths, with a crowd surrounding the king’s car as it neared the hospital, AFP reporters said.

Security forces tried to keep the crowds at bay, as many shouted slogans demanding accountability.

The protesters included relatives of patients who died and others who had family members being treated at the hospital.

Suleiman Khreisat, a retired nurse who lost two of his relatives, told AFP the hospital was facing several shortcomings.

“The hospital suffers from a shortage of medical and nursing staff and now there is a shortage of oxygen,” Khreisat said, adding that this has exacerbated subpar conditions at the hospital.

Patients were not receiving “their full medical right to treatment”, he added.

Another man, who called himself Abu Abdullah, said he also lost a relative and that “everyone who erred must be held responsible”.

“We hope that God will have mercy on all the victims,” he added.

The head of the national institute of forensics, Adnan Abbas, told Al-Mamlaka the victims were four men and three women who had been on ventilators at the hospital.

“Lung specimens taken during autopsy indicated the deaths occurred in the morning (Saturday) due to a lack of oxygen,” Abbas was quoted as saying. All the victims were over 40, he added.

A medical source earlier told AFP that the hospital was treating 150 Covid-19 patients.

Khasawneh said: “Everyone responsible should be held accountable.”

The deaths come as the daily virus caseload in Jordan has surged in recent weeks, prompting authorities to reimpose restrictions, including an all-day curfew on Fridays, the day of rest and prayer.

Jordan, which began its Covid-19 vaccination drive in January, has recorded more than 460,000 coronavirus cases and over 5,200 deaths since the pandemic started last year.

On Friday, the kingdom received the first shipment of 144,000 doses of the AstraZeneca Covid-19 vaccine supplied through the Covax global vaccine-sharing scheme and funded by the European Union, according to a statement from the UN children’s agency UNICEF.

A second shipment of vaccine doses provided through Covax is expected to arrive in Jordan in April, the statement added.