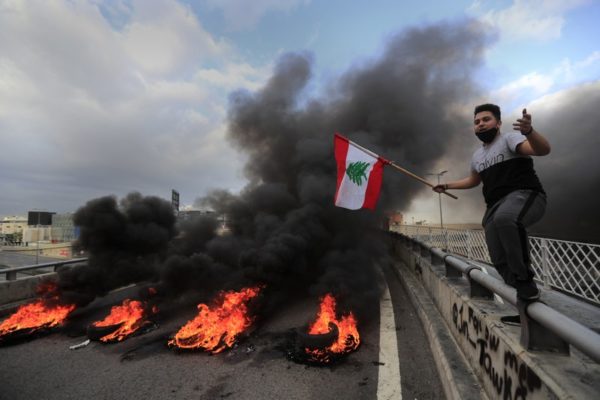 A protester waves a Lebanese flag near burning tires set to block a main highway, during a protest in the town of Jal el-Dib, north of Beirut, Lebanon, Monday, March 8, 2021. The dayslong protests intensified Monday amid a crash in the local currency, increase of consumer goods prices and political bickering between rival groups that has delayed the formation of a new government. (AP Photo/Hussein Malla)
Share:

By BASSEM MROUE42 minutes ago

The dayslong protests come against the backdrop of a crash in the local currency, an increase of consumer goods prices and political bickering between rival groups that has delayed the formation of a new government.

President Michel Aoun blasted the road closures calling them “organized acts of sabotage that aim to undermine stability.” Aoun’s comments came during a meeting Monday attended by heads of the country’s security agencies and economic and financial officials.

He added that the army and police “should fully perform their duties and implement the law without hesitation.” His comments were expected to lead to a crackdown against the protesters to force them to open the roads.

Starting in the early morning hours, small groups of demonstrators blocked the southern, northern and eastern entrances to Beirut with burning tires and parked vehicles. In other parts of Lebanon, soldiers briefly opened some roads only to have protesters close them again shortly afterward.

In the southern village of Abbasiyeh, a man poured gasoline on his body and tried to set himself on fire before civil defense members and soldiers intervened and sprayed his body with water.

Tens of thousands have lost their jobs over the past year as the economic crisis, the worst in Lebanon’s modern history, was made worse by the spread of the coronavirus. According to the World Bank, the crisis is expected to drag more than half of Lebanon’s population into poverty.

Sleiman Haroun, President of the Syndicate of Hospitals in Lebanon, told The Associated Press that after a two-day weekend when there is no oxygen distribution, some hospitals are running low and urgently need supplies, especially to treat COVID-19 patients.

“This is not a joke. It is a matter of life and death,” Haroun said urging protesters to allow vehicles carrying supplies of oxygen to pass. There are several oxygen plants around Lebanon and they supply hospitals throughout the country, including some in remote areas.

Despite a weekslong lockdown in Lebanon, cases of coronavirus remain high in the tiny country, with 2,377 new cases registered on Sunday, raising the total cases since February last year to more than 395,000. The virus has also killed 5,047 people, including 33 on Sunday.

On Saturday, Lebanon’s caretaker Prime Minister Hassan Diab warned that the country was quickly headed toward chaos and appealed to politicians to put aside their differences in order to form a new government that can attract desperately needed foreign assistance.

The local currency hit a record law against the U.S. dollar on Saturday getting to close to 11,000 pounds on the black market.

Lebanon has been hit by one crisis after another, starting with nationwide protests in October 2019 that revealed a severe financial and economic crisis. The situation was made worse by coronavirus and a massive blast at Beirut’s port in August that killed 211, wounded more than 6,000 and damaged large parts of Beirut.