Lebanese Authorities step up repression through use of terrorism charges against protesters: Amnesty 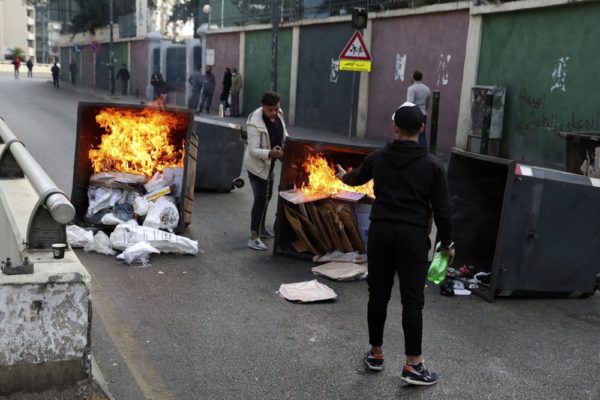 Protesters burn garbage containers to block a road in Beirut, Lebanon, Monday, March 8, 2021. The dayslong protests intensified Monday amid a crash in the local currency, increase of consumer goods prices and political bickering between rival groups that has delayed the formation of a new government. (AP Photo/Bilal Hussein)
Share:

Lebanese authorities must immediately stop the use of terrorism-related charges to prosecute protesters, which marks a worrying new turn in the ongoing repression of activists and demonstrators, said Amnesty International. The organization further reiterates its call that the authorities must immediately cease the practice of summoning civilians before military courts.

On 19 February, Lebanon’s military prosecutor filed terrorism-related charges against at least 23 detainees, including two minors, involved in heated protests in the northern city of Tripoli –  during which both Internal Security Forces (ISF) officers and civilians were injured and one civilian killed – citing articles from the Law on Terrorism. If convicted, these protesters could face the death penalty.

“The Lebanese authorities’ oppressive and disproportionate use of terrorism-related charges to prosecute protesters marks an alarming escalation in their repression and is clearly intended to instil fear and deter protests. This only serves to punish people who are suffering a relentless stream of hardships as a result of the soaring cost of food in the midst of an economic and financial meltdown, strict lockdown measures and worsening shortages in basic services including electricity and medical supplies,” said Lynn Maalouf, Amnesty International’s Deputy Director for the Middle East and North Africa.

“By resorting to the use of the anti-terror law and summoning protesters to military courts, Lebanese authorities are stepping up a pattern of harassment of activists that has been steadily escalating since a wave of anti-government protests first began in October 2019. Instead of protecting people’s rights to protest, the Lebanese judiciary is complicit in the ongoing repression of protesters and efforts to crush dissent.”

Due process violations and torture

A total of 35 people were detained in relation to the protests that erupted in Tripoli between 25 and 31 January. Most of them were detained at protests, but others were arrested from their homes or summoned by telephone. None of those arrested were served arrest warrants. Detainees were not allowed to contact their families or a lawyer during the preliminary investigations. Following the preliminary interrogation, at least 23 detainees were charged with terrorism-related offences and theft. As of 5 March, 12 detainees charged had been released on bail and another 11 remained in detention.

The Tripoli Bar Association (TBA), which intervened on behalf of the detainees, said military and security agencies initially denied detaining anyone, then they refused to allow the lawyers to see the detainees and attend the investigations, claiming that the law doesn’t apply to them. Subsequently, Amnesty International joined at least 22 legal and human rights organizations in signing a petition drafted by TBA, calling on the parliament to organize a hearing to question ministers of Defense, Interior, and Justice regarding the failure to apply Lebanese legislation guaranteeing defendants’ rights to a fair trialthe ongoing failure to allow lawyers to attend preliminary investigations, and the lack of enforcement of Law 65/2017 criminalizing torture.

One detainee who was subsequently released bore signs of severe beatings all over his body, with significant injuries to his head, shoulders and neck, suggesting he had been subjected to torture or other ill-treatment. Amnesty International reviewed the medical report detailing the injuries and marks on his body.

His lawyer told Amnesty International that his client was arrested on 28 January while taking pictures at the protests. He was standing behind a soldier who turned to him and hit him on the head with a machine gun and broke his camera. The young man was subjected to enforced disappearance for four nights before being released on 1 February from the Ministry of Defence military detention centre.

Lebanese authorities must adhere to Law 191 of the Code of Criminal Procedure and respect the right to due process and fair trial, disclose whereabouts of detainees and allow prompt contact with lawyers and families.

“The Lebanese authorities are abjectly failing in their obligation to ensure all defendants receive a fair trial. Civilians must not be tried before military courts. The Lebanese authorities must immediately stop all violations of due process and ensure that allegations of torture and other ill-treatment are promptly and effectively investigated,” said Lynn Maalouf.

During the protests, the ISF and army used live ammunition, tear gas, and water cannons against protesters. According to an ISF statement, live ammunition was only used after protesters attacked security forces with Molotov cocktails and hand grenades and raided a local court and municipality buildings.

Over the three most heated nights of protest between 26 and 28 January, more than 300 protesters were injured, as were more than 40 members of the security forces. One bystander, Omar Tayba, was killed when a bullet that hit the asphalt ricocheted and struck him in the back on 27 January.

His brother, Ahmed, told Amnesty International that he had been standing in Al Nour Square, about 200 meters away from the clashes when he was hit. He began walking away when he saw the ISF starting to shoot live ammunition at the ground, but as he turned to leave, a bullet hit him in the lower back. His brother said that doctors at Al Nini Hospital confirmed Tayba had been hit with an “exploding” bullet.

“The Lebanese authorities must urgently open an independent and transparent investigation into the killing of Omar Tayba to ensure there is justice for his death. The use of live ammunition is only ever justified when strictly necessary in self-defence or defence of others against the imminent threat of death or serious injury, and only when less extreme means are insufficient,” said Lynn Maalouf.