Iraq: Pope calls on Christians of Qaraqosh, city ravaged by IS fighters, to ‘forgive’ 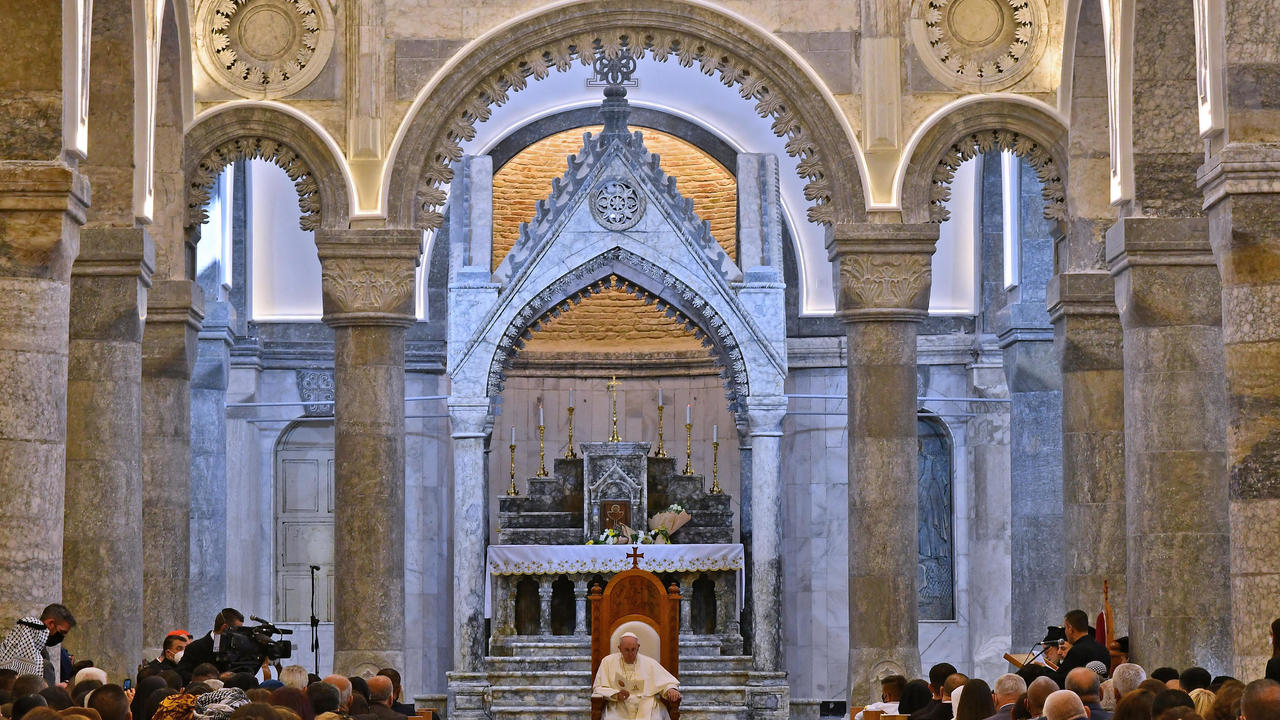 Pope Francis speaks at the Syriac Catholic Church of the Immaculate Conception (al-Tahira-l-Kubra), in the predominantly Christian town of Qaraqosh (Baghdeda), in Nineveh province, some 30 kilometres from Iraq’s northern Mosul, on March 7, 2021. © Vincenzo Pinto, AFP
Share:

Pope Francis met Christians on Sunday in an ancient church torched by the Islamic State group when it swept into the northern Iraqi town of Qaraqosh in 2014.

After the jihadists were ousted from the town in 2016, the Al-Tahera (Immaculate Conception) Church’s imposing marble floors and columns were restored and the faithful gathered there on Sunday to welcome the pontiff.

Among them was Munir Jibrail who, seven years ago, was forced to flee his hometown when black-clad jihadists swept in. Today he’s returned, welcoming a man dressed all in white.

“It’s great to see the pope! We never expected him to come to Qaraqosh,” the 61-year-old maths professor told AFP.

“Maybe that will help to rebuild the country, finally bringing love and peace. We thank him.”

The 84-year-old Pope Francis arrived in the northern town of Qaraqosh on Sunday, amid olive branches and palm fronds.

The town’s residents have waited for this for years.

In 2014, the Islamic State group swept through Iraq’s Nineveh plains, home to one of the oldest Christian communities in the world.

Within days, nearly all of Qaraqosh’s 55,000 Christian residents including Jibrail had fled, mostly east to the autonomous Kurdish region.

For nearly three years, they languished far away from their hometown as they heard news of IS fighters trying to erase every trace of its Christian heritage.

The jihadists ransacked and burned churches and smashed crosses, but were ultimately ousted from the town in 2016.

Since then only 26,000 of Qaraqosh’s residents have returned to painstakingly rebuild it.

Jibrail was among the first. He spent four years restoring his home and finished just in time for Francis’ visit.

The pope prayed with the faithful in Qaraqosh’s Al-Tahera (Immaculate Conception) Church, where the marble floors and internal columns have been restored.

In his address, he hailed the statue of the Virgin Mary which adorns the church, declaring that “to her I entrusted the rebirth of this city”.

Those lucky enough to have tickets to the prayer service were dressed in their Sunday best: women in colourful embroidered robes, children carrying roses, men in ties and suit jackets.

Health workers in blue suits took their temperatures and, once inside, most wore masks to prevent the spread of the Covid-19 pandemic.

Many in the town remember the horrors of IS, which torched Al-Tahera and forced Christians to choose between fleeing, converting to Islam or being put to death.

“Here, the churches were transformed to prisons. Everything was broken. It was heartbreaking,” said Cardinal Louis Sako, head of the Chaldean Catholic Church.

“Today, we are celebrating the return after the exodus.”

In his address, Francis urged reconciliation.

“The road to a full recovery may still be long, but I ask you, please, not to grow discouraged,” he said in his address. “Forgiveness is necessary to remain in love, to remain Christian.”

The message resonated with Amal Ezzo, a 55-year-old headmistress at a Catholic school in Qaraqosh.

“We need to live in peace,” she told AFP.

She too had fled the IS rampage across the north and said Iraq‘s Christians had been abandoned for far too long.

“The government didn’t help us rebuild our homes — international organisations did,” Ezzo said.

Among those gathered, women appeared to outnumber men, and the pope had a special message for them.

“I would like to say a heartfelt thank you to all the mothers and women of this country, women of courage who continue to give life, in spite of wrongs and hurts,” he said.

Iraq is still broadly conservative, with women barred from public life even in some large cities, and only one out of 10 businesses run by women.

The pope pleaded for progress.

“May women be respected and protected!” he urged. “May they be shown respect and provided with opportunities!”