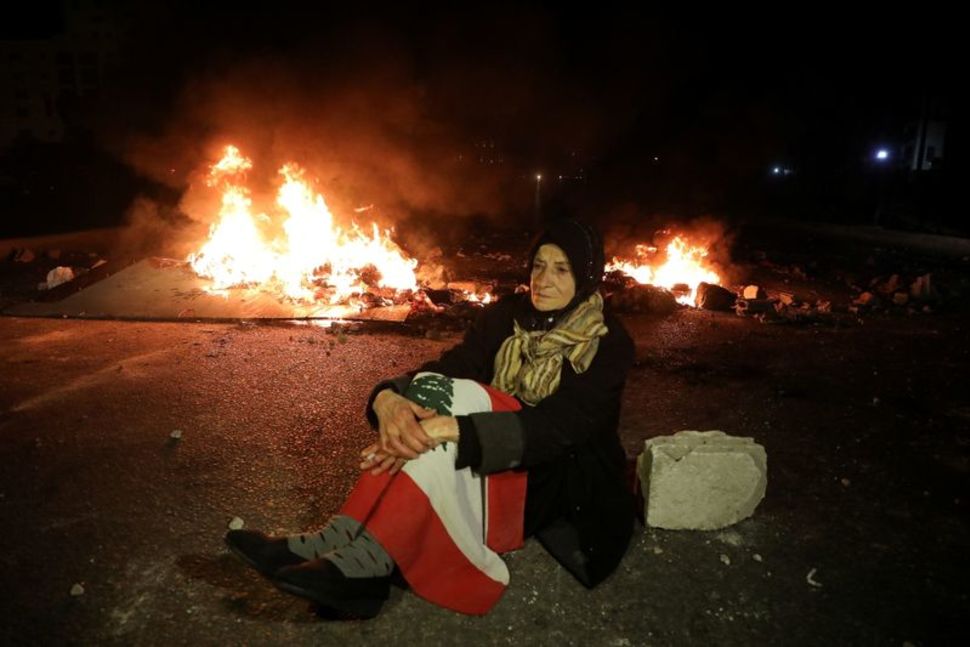 A demonstrator sits on the ground near burning fire during a protest against the fall in Lebanese pound currency and mounting economic hardship, in Beirut, Lebanon March 2, 2021. REUTERS/Mohamed AzakirREUTERS
Share:

BEIRUT – Protesters blocked roads with burning tyres and dumpsters across Lebanon on Tuesday after the currency tumbled to a new low in a financial meltdown that has fueled poverty.

“We can’t bear it anymore…The dollar is going up and they don’t care about us. They’re still dividing up their gains,” Rabih Khaled, who has been unemployed for months, said at one of the protests.

Crushed under a mountain of debt, Lebanon is grappling with a financial crisis that has wiped out jobs, raised warnings of growing hunger and locked people out of their bank deposits.

The collapse of the Lebanese pound, which fell to 10,000 to the dollar on Tuesday, has slashed about 85% of its value in a country relying heavily on imports.

The decline was the last straw for many who have seen prices of consumer goods such as diapers or cereals nearly triple since the crisis erupted.

“They’re taking away our dignity. We came down today to say no we have dignity … We are not insects. They are controlling the dollar for your interests to steal money from the people,” 43-year old Tawfik Marei said.

“If I can still afford to get bread to feed my kids, others can’t. I’m telling everyone to go down to the streets for these people.”

Protesters shut down a main highway out of the capital Beirut and the airport road. People took to the streets in other cities as well after the cost of scarce dollars hit 10,000 Lebanese pounds on the informal market.

That makes Lebanon’s minimum wage worth about $68 a month.

Political leaders have failed to agree a rescue plan since the crisis, rooted in decades of state graft, erupted in late 2019 as dollar inflows dried up.

At the time, protesters had swept the country angry over economic hardship and new tax plans, including a daily 20-cent fee on Whatsapp calls.

The currency last touched lows close to 10,000 in the summer of 2020, weeks before the huge August port blast that devastated much of Beirut.

“I’m asking the president to have a conscience and be aware of the tragic situation that we are facing,” said Katia Bassil, a graphic designer, in central Beirut on Tuesday.