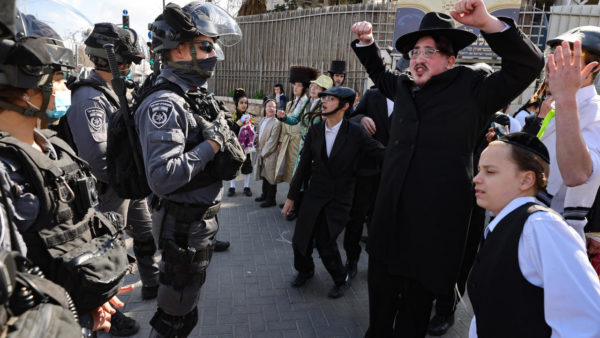 Orthodox Jews, some dressed in costumes to celebrate the Purim holiday, gesture in front of Israeli policemen in the Jerusalem neighbourhood of Mea Shearim on February 28, 2021 menahem kahana AFP
Share:

Dozens of ultra-Orthodox Jews marking the Purim holiday threw stones at police in Jerusalem on Sunday, as tensions persist between authorities and a deeply religious community accused of repeatedly flouting coronavirus restrictions.

“Police commissioner Yaakov Shabtai” was written on one effigy.

Some ultra-Orthodox shouted “Nazis” at the officers, an AFP reporter said, while others threw liquid-filled bottles as well as rocks.

Ultra-Orthodox Jews, known in Israel as haredim, have in recent months clashed repeatedly with police enforcing coronavirus restrictions on gatherings.

They have openly defied bans on large gatherings, including during periods of nationwide lockdown, packing Jerusalem’s streets for the funerals of prominent rabbis as police looked on.

Sunday’s incident came as Jerusalem celebrated Purim, a Jewish holiday which commemorates the saving of the Jewish people from Haman, an Achaemenid Persian Empire official who was planning to kill all the Jews, as recounted in the Book of Esther. Haman was the royal vizier to King Ahasuerus, and he planned to kill all the Jews in the empire.

Some haredim consider the Jewish state and its police a threat to their traditional lifestyle.

A police statement said one suspect was detained for hanging the effigies.

“Police forces will act in any place uniform-wearers will be harmed,” it said.

Israel had imposed a night-time curfew for three nights beginning Thursday evening to curb the spread of the coronavirus during Purim.

Gatherings were limited to a maximum of 10 people in closed spaces and 20 in open spaces, and police were preventing people from entering Jerusalem on Sunday.

Last year, gatherings for Purim were banned, but many defied the restrictions, in moves authorities said contributed to the spread of the virus.

Israel has officially recorded almost 775,000 novel coronavirus cases and over 5,700 deaths since the start of the pandemic.

The government has begun gradually easing restrictions in place since December, when it imposed its third lockdown.

The Jewish state has administered the two recommended shots of the Pfizer/BioNTech vaccine to more than 3.3 million people, over a third of its population.