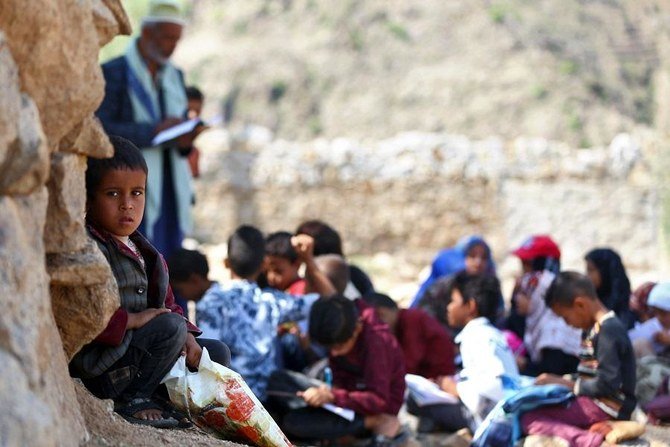 Some 80 percent of Yemenis need help, with 400,000 children under the age of five severely malnourished. Hundreds of Yemeni families including many children trapped inside their camps in Marib province by Iran-backed Houthis are being used as a human shield against government forces, a Yemen government unit has claimed.
Share:

AL-MUKALLA: Hundreds of Yemeni families trapped inside their camps in Marib province by Iran-backed Houthis are being used as a human shield against government forces, a Yemen government unit has claimed.

In a report seen by Arab News on Saturday, the internationally recognized government’s Executive Unit for IDP Camps said that militia fighters had besieged camps and planted land mines on main roads to stop families escaping and hinder advancing troops.

“Houthis have prevented 470 families from fleeing, using them as human shields. Until today, many families in the camps are still trapped by the Houthis,” the report said.

The government unit has appealed to the rebels to stop using displaced families as hostages and allow them to leave the camps.

“The Executive Unit for IDP Camps calls on the Houthis to respect international humanitarian law and stop targeting civilians and displaced persons, and to open safe corridors in order to facilitate the delivery of humanitarian aid.”

The Houthis earlier this month renewed a bloody offensive on Marib, an oil-rich city and the government’s last bastion in the northern half of the country. For four weeks, the Houthis have faced stiff resistance from government forces backed by massive air and logistics support from the Arab coalition.

Army commanders say that hundreds of Houthis have been killed, wounded or captured and their advance on Marib halted.

Maj. Gen. Nasser Al-Thaybani, commander of the army’s Military Operation Authority, said that more than half the Houthi fighters sent to seize Marib have died or been wounded in the fighting, while army troops and allied tribesmen have pushed back all of the Houthi attacks on government-controlled areas.

Local officers and media said on Saturday that Brig. Gen. Abdul Ghani Sha’alan, commander of the Special Security Forces in Marib, was one of several government soldiers who died in fighting with the rebels near Balouq mountain in Serwah district, west of Marib city, on Friday.

A local military officer, who declined to be named, told Arab News that Sha’alan was leading government troops pushing back a Houthi attack on the peak, which was claimed by government forces last week.

Several army commanders and tribal leaders have been killed since the beginning of the rebel offensive on Marib.

Yemen’s Foreign Ministry on Saturday criticized international rights groups over their failure to “name and shame” the Houthis for attacking residential areas after the densely populated city was targeted by 10 ballistic missiles in the previous 24 hours.

“Since the beginning of February, the province has come under the largest and fiercest Houthi attack in which the militia used all kinds of heavy weapons, including artillery, explosive-laden drones and ballistic missiles,” the ministry said in a statement.

On Friday, Yemen’s Prime Minister, Maeen Abdul Malik Saeed, hailed military support from the Arab coalition to help tilt the war in the army’s favor, vowing to continue backing army troops and tribesmen until they push the Houthi out of areas under their control.