Biden tells the world ‘America is back.’ The world believes Trump was not a one-off 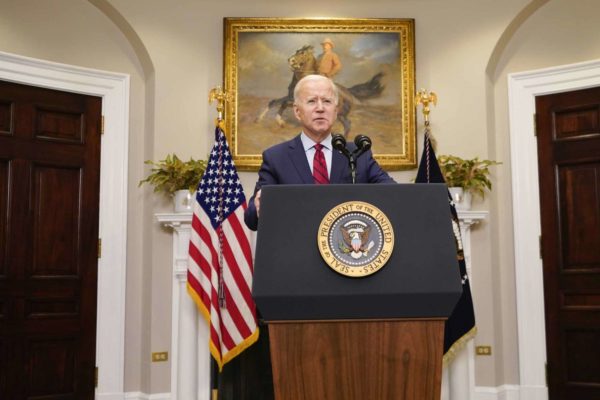 BY Anne Gearan and Ashley Parker

WASHINGTON – For President Joe Biden and his circle, a low point in America’s global standing under President Donald Trump came when he blew up a meeting of U.S. allies in 2018, accusing close partners of “robbing” the United States and hurling insults at his Canadian host.

So it was no accident that Biden’s push to reclaim American leadership in recent days has pointedly included a starring role for Canada, as the new administration seeks to woo an array of allies with a message that “America is back.”

But it’s increasingly clear that Biden cannot simply sweep up the broken diplomatic china and restore the world order that reigned when he was vice president.There is one simple reason: Allies know Trumpism could always come back, either in a 2024 bid by Trump himself or from another presidential hopeful offering a similar pitch.

That has left friends and foes alike with doubts about the value of any new American commitments, given the country’s deep political divide and the possibility that the pendulum could swing back in four years. Allies have begun hedging their bets, musing about a Europe-only security force and exploring wider trade with China.

That’s even true for America’s closest allies, like Great Britain. “The Bidenites say with good reason that they recognize that ‘not politics as usual’ was the theme of the election in the past few years,” Karen Pierce, Britain’s ambassador to the United States, said. “It is a theme that they know they’re going to have to contend with.”

White House national security adviser Jake Sullivan said “there’s no doubt” that foreign leaders now wonder about America’s reliability, given the country’s divisions and the persistence of support for Trump.

Biden directly addresses those doubts in his conversations with his foreign counterparts, Sullivan said in an interview, reminding allies of a history of bipartisan support for institutions such as NATO.

“The president has laid out a strong case about why that is not isolated to one party or one president, that the last four years were an aberration and not some kind of new normal,” Sullivan said.

Biden has spoken to roughly a dozen heads of state since taking office. In addition to recommitting to NATO, the United Nations and global climate efforts, Sullivan said, Biden starts nearly all the calls by recognizing any global agenda for the United States is tied to addressing not only the pandemic at home, but the country’s internal divisions.

“That work at home is vital to our credibility internationally,” Sullivan said, summarizing Biden’s message.

The challenge is clear. Biden has brought the United States back to the Paris climate agreement; rejoined the World Health Organization; returned to the U.N. Human Rights Council; and made moves toward resuming the nuclear deal with Iran. Yet the next president could instantly reverse all those decisions.

Biden is working to persuade U.S. allies that it is unlikely.

“The United States is determined – determined – to reengage with Europe, to consult with you, to earn back our position of trusted leadership,” Biden said this month, during his first foreign policy address as president.

Days later, Biden hosted a delighted Canadian Prime Minister Justin Trudeau – the leader Trump dismissed in 2018 as “very dishonest & weak” – for a video visit at the White House, making him the first foreign leader to be so honored.

Biden has also recommitted to the North Atlantic Treaty Organization tenet that an attack on one member is an attack on all, a principle Trump had questioned. And Biden has reassured major U.S. allies in Asia that the United States won’t abandon them or abruptly yank American troops.

The outreach has been greeted with relief by allies bruised by Trump’s isolationism and insults. Trudeau thanked Biden for the shift in style and substance, noting that American officials helping draft a statement about the meeting actually added references to climate change rather than deleting them.

“I believe that Europe increasingly recognizes the necessity of joining our American friends to rediscover that farsighted leadership and the spirit of adventure and transatlantic unity that made our two continents great in the first place,” Johnson said.

French President Emmanuel Macron and German Chancellor Angela Merkel have cheered Biden’s commitment to consulting with Europe and defending it under the NATO alliance, while saying some of the European independence forced by Trump should remain.

Pierce, the British ambassador, said that even in the changed landscape, the U.S. posture is critical to the way other countries position themselves. “It’s very striking how American leadership tends to define everything that happens, and without it everything tends to grind to a bit of a halt,” she said.

Any foreign leader tempted to anticipate a return to normalcy under Biden was probably jolted by the Jan. 6 mob attack on the Capitol, which dented U.S. credibility as a powerful voice for democratic principles, Sullivan said when asked about the insurrection on the Capitol.

“On the question . . . of whether the United States has its own house in order, has a strong foundation to be able to effectively engage the world, the president’s answer is, ‘We absolutely have the capacity to pull this country together – but we have work to do,’ ” Sullivan said.

“Most allies around the world are very happy to see anyone but Trump as president – and Biden is anyone but Trump,” Bremmer said. But, he added, “the realities of the last four years” have persuaded the global community that Trump was not a one-off.

Notably, several potential 2024 Republican presidential candidates were among those who voted to overturn the 2020 vote. Other GOP hopefuls attended the Conservative Political Action Conference this weekend, where the agenda included events that perpetuated the falsehood of a stolen election. Trump is set to speak at the conference Sunday in his first major appearance since leaving office last month.

Meanwhile, Biden’s plans for restoring American leadership fall a distant second to his top priority of spurring U.S. recovery from the pandemic and the economic devastation it wrought. The administration is now consumed with pushing a massive economic stimulus package through a divided Congress, making up ground on an unusually slow hiring and confirmation process, and speeding up the national vaccination effort.

The pandemic, for now, rules out in-person diplomacy. Even with vaccines and billions in federal investment, it will probably be months before the U.S. economy turns the corner, and months before Biden or Secretary of State Antony Blinken can begin making or hosting foreign visits.

Sullivan said the administration sees a global component to many of its domestic challenges, including covid-19. “Not only do we have to vaccinate very American, but we need to build a public health system globally that detects and prevents the next pandemic,” he said.

While some foreign policy problems demand urgency – like the push to reconstitute the Iran nuclear deal – diplomats said allies will give Biden some room to maneuver.

“Of course we know this,” a senior European diplomat said of Biden’s domestic imperatives. “You are not elected by your friends around the world. You are elected by your own citizens.”

Biden’s global outreach is complicated in other ways. For one thing, he is not in a hurry to reverse all of Trump’s policies.

Biden has not lifted Trump’s punitive tariffs on Chinese goods, for example, planning to use them as leverage in an overhaul of U.S. relations with China.

And for now, Biden has left in place steel and aluminum tariffs that European military allies found offensive because of Trump’s implication that those nations posed a security threat to the United States. Biden is expected to move to lift the protectionist measures only after his choice to be the U.S. trade envoy is on the job.

Biden has also disappointed Canada, America’s largest trading partner, with a “Buy American” order meant to keep faith with U.S. workers struggling during the current economic downturn. Canadian firms fear that will shut them out of U.S. government contracts.

Biden canceled a permit for the Keystone XL pipeline project, fulfilling a campaign pledge that Canada claims will cost it jobs.

An evidently relieved Trudeau did not bring up any of that during the brief portion of their meeting seen by reporters. Neither leader mentioned Trump either, or the Group of Seven summit in Quebec that produced one of the defining moments of Trump’s hostility toward traditional U.S. allies.

An image from a closed-door session at the time appeared to show a confrontation between Merkel and a defiant Trump. The candid picture was posted to Merkel’s government social media accounts while the tense meeting was underway, suggesting someone wanted it seen.

“We’re like the piggy bank that everybody’s robbing, and that ends,” Trump declared later, during a combative solo appearance. He refused to sign onto a joint statement after the summit.

At the time, Biden had left the vice presidency just 18 months earlier and had not yet announced his intent to challenge Trump in 2020. When he did declare his candidacy, he stressed domestic flash points like the white supremacist rally in Charlottesville, rather than the U.S. position abroad.

But when he won in November, Biden tied the two together. He told cheering supporters he wanted “to make America respected around the world again and to unite us here at home.”