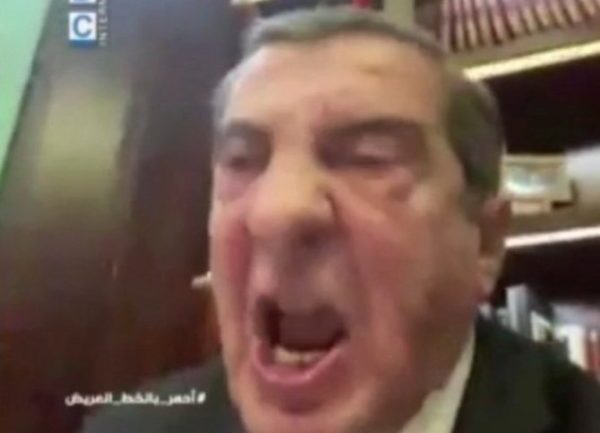 Deputy parliament speaker Elie Ferzli, an ally of the Syrian regime and the Iranian backed Hezbollah militant group who is 71, tweeted that he got a shot. This created outrage in Lebanon since people who are much older have not been able to get vaccinated . This also prompted the World Bank to threaten to cut Lebanon’s vaccine funding after the reported violations. In this file photo which went viral , Ferzli attacked the world bank management
Share:

It was a Covid-19 vaccine scandal that graft-weary Lebanon was braced for — yet its brazenness struck a nerve. In the second week of a national vaccine rollout, 16 lawmakers and a handful of staffers were inoculated with the BioNTech/Pfizer jab at the Lebanese parliament; days earlier, president Michel Aoun, his wife and 10 members of his entourage took the shots.

This means politicians were among the lucky ones to get less than 30,000 vaccines administered so far in Lebanon, home to more than 6m people, including some 1.5m refugees. Last week’s revelations have fueled angry accusations of queue-jumping by the political elite. Thalia Arawi, ethics officer for the national vaccination program, resigned. Abdul Rahman al-Bizri, the vaccination committee’s head, denounced a “violation of the vaccination process that cannot be tolerated.”

The affair looked like another example of the bad governance and alleged corruption that has made Lebanese distrust their leaders, and the international community unwilling to donate to the hard-hit Middle Eastern country.

“For decades, we’ve been seeing international aid come into the county and then be siphoned off to politicians and their cronies,” said Aya Majzoub, Lebanon researcher at Human Rights Watch. But recently “the international community got fed up with the scale of Lebanon’s corruption,” and has made badly-needed recovery cash subject to firm conditions.

Lebanon’s caretaker health minister Hamad Hasan has defended the national vaccination plan as “robust, coherent”. © Mohamed Azakir//Reuters Lebanon is not the only country to have a queue jumping controversy. Argentina’s president fired his health minister for facilitating inoculations for VIPs with government connections. In Warsaw last year, 450 doses were administered to Polish celebrities and politicians. Peru’s former president got his shots in October in secret along with his wife and brother.

But Lebanese politicians were already reviled as the state buckles under the weight of a pandemic-exacerbated economic crisis, stemming from corruption and mismanagement, and the aftershocks of the devastating Beirut port explosion, widely blamed on official negligence.

Bad governance has frustrated the Lebanese for years, leaving them without basic services like reliable electricity and fueling mass protests. So when the World Bank made Lebanon the first country to get financing for vaccine purchases, with $34m repurposed from a pre-existing healthcare loan, it said it would be tough about fairness.

“We call upon everyone in Lebanon to . . . await their turn, regardless of their job rank or political affiliation,” said Ferid Belhaj, the World Bank’s vice-president for Middle East and north Africa, at the programme’s launch. “There will be no wasta” — the Arabic word for connections that get you favours. The International Federation of the Red Cross was tasked with monitoring the vaccine programme — including “eligibility of vaccine recipients”, according to its own press release.

If the violation is confirmed, the World Bank “may suspend financing for vaccines and support for COVID19 response across Lebanon!!” tweeted Saroj Kumar Jha, the Bank’s regional director. There is no decision yet.

Bessma Momani, professor of political science at the University of Waterloo, said the reallocated loan “was a favour” from the World Bank at a time when Lebanon cannot borrow. This violation “is going to spoil that process” for other countries who might have tried to follow the precedent.

To 730,000 Lebanese registered and waiting their turn, it is particularly galling because, despite the urgency of Lebanon’s many crises, lawmakers have failed to form a new government — seven months since the previous one resigned.

Hamad Hassan, caretaker health minister, insisted the inoculated MPs had registered. He defended the national plan as “robust, coherent”. Meanwhile, vaccinated MPs wondered what the fuss was about. Yassine Jaber, an MP who got a shot despite being under 75, the current age threshold, said his asthma made him vulnerable.

“Recently two MPs passed away because of corona,” he said, adding that parliament “is infested” with the virus. Jaber argued that lawmakers should be considered frontline workers, and that the incident was being blown out of proportion: “it’s only about 20-21 injections”.

The shots for MPs have damaged public trust further, Majzoub said, however: “Now they have clearly strayed away from the plan, it’s hard to take them at their word.”