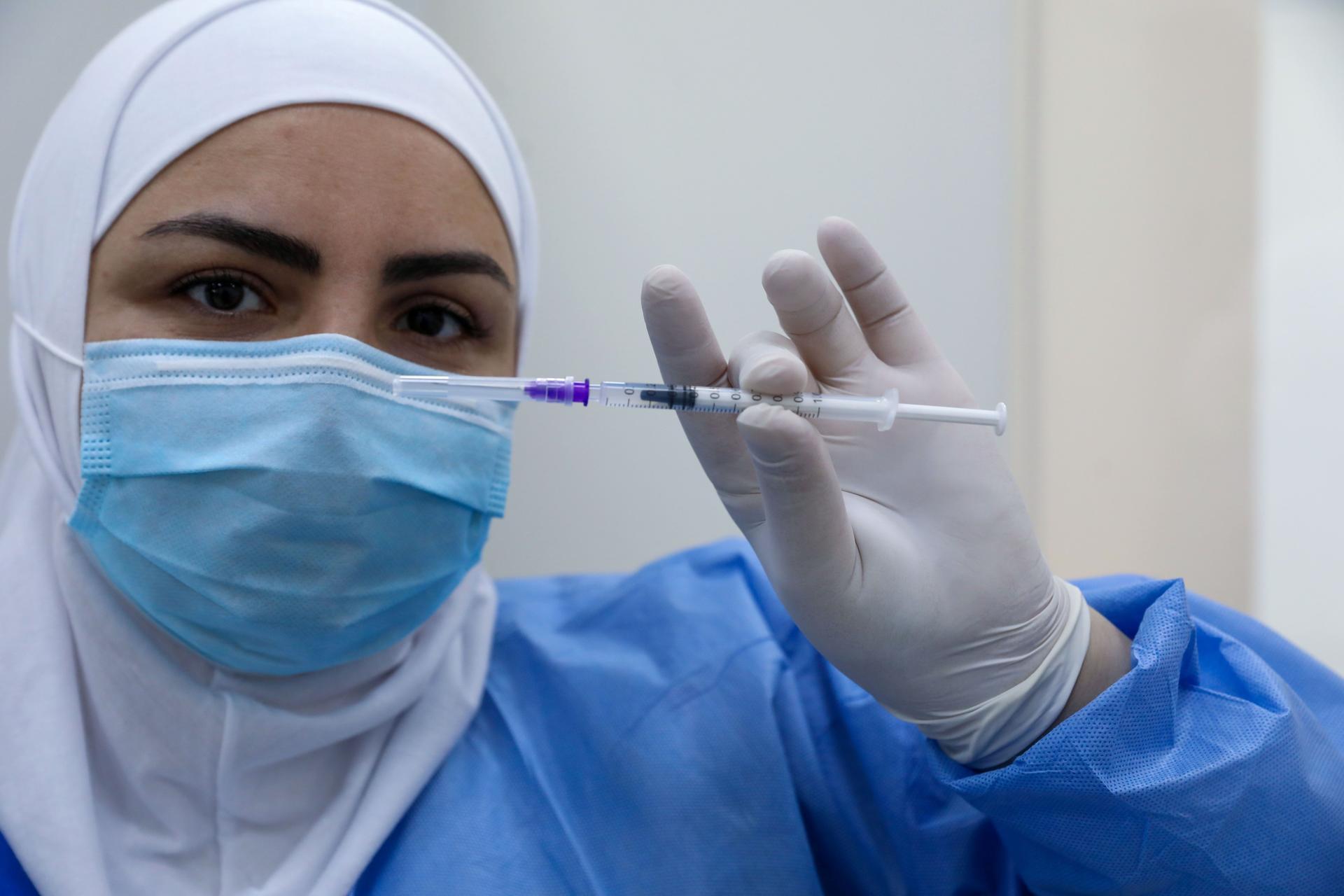 A member of the healthcare staff prepares a dose of the Covid-19 Pfizer/BioNTech vaccine at Rafik Hariri Hospital in the capital Beirut, as Lebanon’s inoculation campaign got under way on Sunday. AFP
Share:

As Lebanon began COVID-19 vaccinations on Sunday, concerns about whether its notoriously corrupt government could handle the process fairly and competently were out in the open.

Beirut, Lebanon – Lebanon’s COVID-19 vaccination roll-out has begun, but there remain concerns the most vulnerable people in the country may be left out of the campaign or excluded altogether.

Regardless of nationality or legal status, anyone living in Lebanon is supposed to be covered under its vaccination campaign, including refugees and migrant labourers, who count for about 1.5 million of the estimated six million people living here.

“For refugees, one of the problems that we’ve noticed are very low registration — it could be a lack of awareness, or a lack of trust in the process,” said Aya Majzoub, Human Rights Watch’s Lebanon and Bahrain researcher.

Of the almost 540,000 people who have registered in Lebanon for the vaccine so far, slightly more than 11,000 are Syrian or Palestinian, the two largest non-Lebanese populations in the country.

Migrant labourers, the majority of whom hail from Bangladesh, Ethiopia, Sri Lanka and the Philippines, appear to be completely ineligible, as per a statement by the country’s Ministry of Labour last week.

“There’s absolutely no reason to exclude them, especially considering their vulnerability,” Majzoub said. “Many of them live in crowded conditions or take care of the elderly.”

As Lebanon began COVID-19 vaccinations on Sunday, concerns about whether its notoriously corrupt government could handle the process fairly and competently were also out in the open.

“Let me say it very clearly: ‘There will be no wasta,’” said Farid bel Haj, the World Bank’s vice president for North Africa and the Middle East, in a statement marking the roll-out.

“Wasta”, Arabic for “favoritism ”, is a euphemism for the manner in which the Lebanese subvert all kinds of rules to gain preferential treatment. The country’s corruption has left its economy and infrastructure in shambles, a problem further exacerbated by a rate of COVID-19 infections that have stretched its healthcare system to the limit.

The World Bank has provided $34m to fund Lebanon’s COVID-19 vaccination programme, which on Tuesday was set to begin inoculating citizens above age 75 after beginning on Sunday with front-line health workers.

To ensure the vaccine reaches citizens equally, the bank contracted the International Federation of the Red Cross (IFCR) to monitor the campaign.

“Our organisation is doing this only in Lebanon, we have been asked by the World Bank to do this, and we are using our extensive experience in managing disasters,” said Rana Sidani Cassou, the IFCR’s head of communications for the Middle East and North Africa

“Based on this experience, we have accepted this task — today, we have more than 20 monitors deployed in 15 vaccination centres. We collect data on a daily basis and send this report to the World Bank on a daily [basis],” Sidani Cassou told Al Jazeera on Tuesday.

The IFRC is monitoring everything from whether the vaccine is being properly stored to whether it is going to the intended recipients. It is also monitoring social media platforms “to see what the community is saying,” she said.

Refugees, the main organisation that aids Syrian refugees in the country.

“The hesitancy and resistance are two things that can play in role in people not coming forward — we believe no one is safe until everyone is safe.”

Other Lebanese who spoke to Al Jazeera said they were looking forward to receiving the vaccination.

‘Didn’t believe in it’

Scepticism over getting the vaccine may be the country’s biggest hurdle.

“I’m very afraid,” said Mohamed Mohsen, who runs a coffee stand in Beirut’s Shatila neighbourhood. “Maybe if someone tries it and I know them, maybe I’ll get it if nothing happens to them.”

“I was reading a lot on Facebook that the vaccine is not good and has side effects,” said Jamila Zagzag, 33, a Syrian woman living nearby. “I’m afraid.”

Many Syrians and Palestinians who spoke to Al Jazeera also said they were unaware of how to register to receive the vaccine — both populations are more used to dealing with branches of the United Nations for their needs rather than the Lebanese state.

“Part of our effort is to make sure that we can mitigate the hesitancy and the resistance that might arise,” said Dalal Harb, a spokeswoman for the UN High Commissioner for

“They said they will call me and let me know where to get it,” said 70-year-old Kamal Ali Ahmed, a butcher in Shatila who has registered for a shot.

Bashar Farhat, 20, expressed satisfaction the government might be held to account. “There are priorities, but everyone will get it in the end. The World Bank is pressuring them.”

Firass Abiad is the head of Rafik Hariri University Hospital, which has become the government’s headquarters in its COVID-19 response.

“Whenever you have a process with external auditing, it sends a positive message. It’s not a secret we have trust issues and the public has doubt about how the government is going to deal with it, and these external auditors gives it some credibility,” he said.

“What we are seeing now is the beginning — the main part of the vaccination drive is still going to come,” Abiad added.

Scepticism over getting the vaccine may be the country’s biggest hurdle.

“I’m very afraid,” said Mohamed Mohsen, who runs a coffee stand in Beirut’s Shatila neighbourhood. “Maybe if someone tries it and I know them, maybe I’ll get it if nothing happens to them.”

Lebanon has so far received 28,000 doses of the vaccine out of 4.8 million it said it has bought. The government has said it is in the process of securing another 1.5 million doses but it would still fall short of reaching 80-90 percent of the population, the government’s stated goal.

“That’s vaccinations for less than half of the population, and it seems like they will try to fill the gap through the private sector. But it’s unclear how they’re going to do that,” Majzoub said.