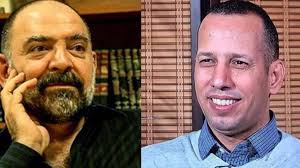 The assassination of Lebanese intellectual and activist Lokman Slim (L) by Hezbollah of Lebanon and Hisham Hashimi, the counterterrorism adviser to Iraq’s prime minister, by Kataeb Hezbollah of Iraq are tragic and timely reminders of what this paramilitary anarchy in Lebanon and Iraq looks like. Lebanese and Iraqis know all too well what it means to wake up each morning to bullet-riddled bodies along the roadsides. “Weapons don’t serve the country. They didn’t serve me, they cost me my son,” declared Lokman’s mother at his funeral.
Share:

This is how the demise of nations occurs: Iraq and Lebanon are inexorably following the path blazed by Yemen and Syria. The fundamental prerequisites for statehood are disintegrating, while those in positions of influence are either unable or unwilling to act. The catastrophic situation facing these nations renders matters starkly simple: Either there are democratic sovereign states, or there is paramilitary anarchy.

The assassination of intellectual and activist Lokman Slim is a tragically timely reminder of what this paramilitary anarchy looks like. Lebanese and Iraqis know all too well what it means to wake up each morning to bullet-riddled bodies along the roadsides. “Weapons don’t serve the country. They didn’t serve me, they cost me my son,” declared Lokman’s mother at his funeral.

Saad Hariri also understands what this means, having seen his own father assassinated exactly 16 years ago by an immense bomb planted by Hezbollah and Syrian operatives. Four months after his appointment as prime minister-designate, Hariri said last week that no progress had been made toward forming a government. He knows that an effective, technocratic government is Lebanon’s only path to salvation, but too much time has already been wasted pursuing futile talks with parties that have no intention of forming a government, unless exclusively on their terms.

The shotgun marriage between the parties blocking this deal — Hassan Nasrallah, Michel Aoun and Gebran Bassil — is rooted both in necessity and in poisonous mutual loathing. US sanctions against Bassil have drawn him tighter into Nasrallah’s embrace, even as Aoun and Bassil watched their Free Patriotic Movement Christian support base evaporate in disgust at being shackled to an Iranian proxy dragging their nation towards collapse and conflict. The widely loathed Bassil is a cynical opportunist who would sell his soul to the devil (if he hadn’t already done so) to win the presidency. Hezbollah know they can’t trust him, but they need him to maintain their stranglehold on the state. These leaders own the collective culpability for pushing Lebanon into the abyss.

In another indicator of how Tehran is dragging Lebanon into its orbit, a deal for Lebanon to receiver 500,000 tons of fuel oil from Iraq has been described by experts as a clumsy ruse for Iran to smuggle oil in violation of sanctions. Lebanon’s caretaker Energy Minister, Raymond Ghajar, gave the game away when he said: “Iraq’s heavy fuel doesn’t match Lebanon’s specific needs, but an Iraqi company can arrange a swap.” It requires little imagination to guess which neighboring state Iraq will be “swapping” oil with. Hezbollah’s control over Lebanon’s ports paves the way for larger volumes of Iranian oil to be exported.

Also in Iraq, dozens of activists and journalists have been murdered by Iran-backed militias. More evidencehas emerged that Hisham Hashimi, the counterterrorism adviser to Iraq’s prime minister, was assassinated by Kata’ib Hezbollah because of his investigations into these proxy militias. They have run rings around Prime Minister Mustafa Kadhimi’s efforts to rein them in, demonstrating that in much of the country they are the de facto authorities. This is especially true in provinces along Iraq’s eastern and western borders, where they oversee the lucrative trade in licit and illicit goods imported from Iran.

Along the Iraq-Syria border region Iran has constructed massive fortifications, which are frequently the subject of hundreds of Israeli airstrikes in Syria. These fortifications act as a forward base for controlling the borders and exerting control over eastern Syria, notably to transport missiles and munitions for menacing the wider region. Hundreds of thousands of Syrians have been massacred to secure the hegemony of Iran’s proxies. There is no longer an entity recognizable as Syria, simply an assemblage of failed statelets dominated by proxies loyal to Iran, Turkey and other powerbrokers.

Another Iran-sponsored militia, the Houthis, launched strikes last week against the Saudi civilian airport in Abha, setting a passenger plane on fire. The attack was clearly intended to cause fatalities. Houthi attacks against GCC civilian targets are becoming increasingly sophisticated, using Iran-supplied drones and missiles, along with mines and explosive-laden boats.

Although Hezbollah and Iraq’s paramilitaries are seeking to dominate their respective state infrastructures; the day they achieve this goal would be the end of these nations as we know them. In Lebanon, Israel would never allow the consolidation of a Hezbollah-monopolized state along its northern borders.

Israel’s military often talks about the current situation as being a “war between wars;” Israeli strikes against Iran-aligned bases, sabotage attacks and assassinations inside Iran itself, and overflights and border skirmishes — these are Israel’s efforts to postpone a region-wide war, which its generals believe is inevitable. The wholesale disintegration of Lebanon and Iraq, or paramilitary takeovers, would only bring it closer.

Although opposition to Iran has been angrily fermenting within Arab Shiite communities, desperate citizens are often simply grateful to Hezbollah and its allies for providing protection and welfare. They love Hezbollah and believe that Hezbollah loves them back. But Tehran isn’t the protector of Shia Islam — nor of Lebanon, Iraq, and Palestine.

How many times have the “Islamic Resistance” sat back and watched Gaza’s citizens being bombed to smithereens? Far from resisting Israel, Hezbollah appears terrified to respond to any of Israel’s airstrikes and actions. So what even is the purpose of this “Islamic Resistance”?

To Tehran, these Arab nations under its control are a negotiating card and a military bulwark. The ayatollahs would sell out these states or allow them to be destroyed in a heartbeat if it advanced their interests.

Hezbollah and Iran style themselves as Lebanon and Iraq’s protectors, when in fact they are the guarantor of these nations’ imminent destruction.