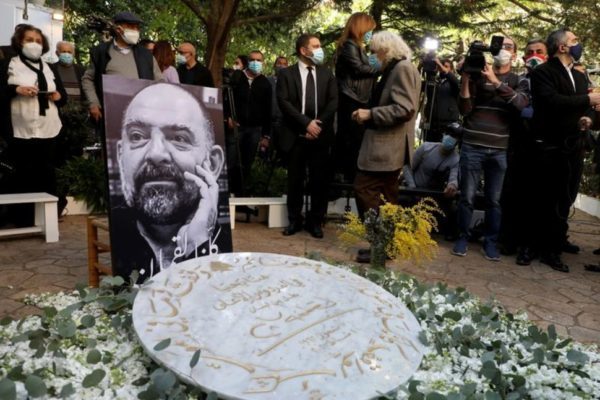 A picture of Lokman Slim, a Shiite activist , a Hezbollah critic and publisher, is seen during a memorial service to pay tribute to him, one week after he was found dead in his car with 4 bullets in his head and one in his back in Beirut, Lebanon February 11, 2021. REUTERS/Mohamed Azakir REUTERS
Share:

The U.S. ambassador to Lebanon paid a rare visit to a quarter of Beirut that is a Hezbollah stronghold on Thursday to attend the memorial service for political researcher and activist Lokman Slim.

He was shot dead and found in his car last Thursday in south Lebanon – the first killing of a high-profile activist in years.

“This was a barbaric act, unforgivable and unacceptable,” Dorothy Shea said in a speech at the service, which was held at the Slim family home in Beirut’s Dahiya quarter.

Slim ran a research centre, made documentaries with his wife and led efforts to build an archive on Lebanon’s 1975-1990 sectarian civil war.

He spoke out against what he described as the intimidation tactics of the Iranian-backed, armed Shi’ite Hezbollah group and its attempts to monopolise Lebanese politics.

Hezbollah has condemned the murder, but Slim’s sister has suggested he was murdered because of those views.

On Thursday, his mother, Salma Merchak, quietly cried as she listened to Muslim and Christian prayers for her son at the service, which was also attended by the ambassadors of Germany, Canada, Britain and Switzerland.

In a speech afterwards, she asked Lebanon’s young people to foreswear arms and embrace dialogue in his memory.

“I ask you, the young, if you really want a nation to continue with the principles that he fought for and was convinced of,” Merchak said.

“Use only your logic and reason. Weapons don’t benefit the country. They didn’t benefit me – I lost my son.”