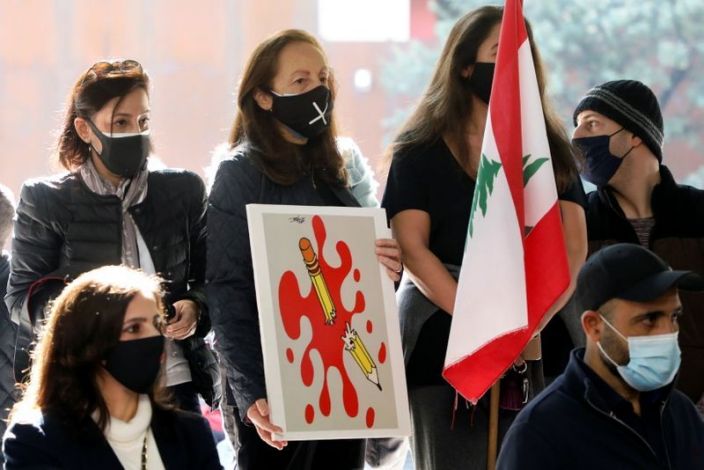 BEIRUT (Reuters) – Activists rallied in downtown Beirut on Saturday to protest the killing of prominent Hezbollah critic Lokman Slim and to demand a transparent investigation.

Slim, a Shi’ite publisher in his late fifties, ran a research centre, made documentaries with his wife and led efforts to build an archive on Lebanon’s 1975-1990 sectarian civil war.

He was a vocal critic of what he described as armed group Hezbollah’s intimidation tactics and attempts to monopolise Lebanese politics.

He was shot dead and found in his car on Thursday in south Lebanon – the first killing of a high-profile activist in years.

Slim had gone missing the night before. He had four bullets in his head and one in his back.

On Saturday morning Slim’s wife, Monika Borgmann, tweeted for the first time since his death, sharing a two-word banner with a black background that said “zero fear” in Arabic.

The same two words appeared on a banner at the protest where activists blamed the Iranian-backed Shi’ite Hezbollah for the killing.

“If Hezbollah is really innocent of this crime or refuses it and condemns it, then they have to help the security apparatus and Lebanese judicial authorities especially that Lokman Slim was killed in their area of security influence,” said one of the protesters, Youssef Diab.

“If that doesn’t happen then they are still suspects.”

Hezbollah condemned the killing on Thursday, which Lebanese officials, including the president, called an assassination.

“We will not kill him again with our silence,” said one demonstrator who gave her name as Nelly. “My one fear is that people will be scared and remain silent, then Lebanon will be in danger.”