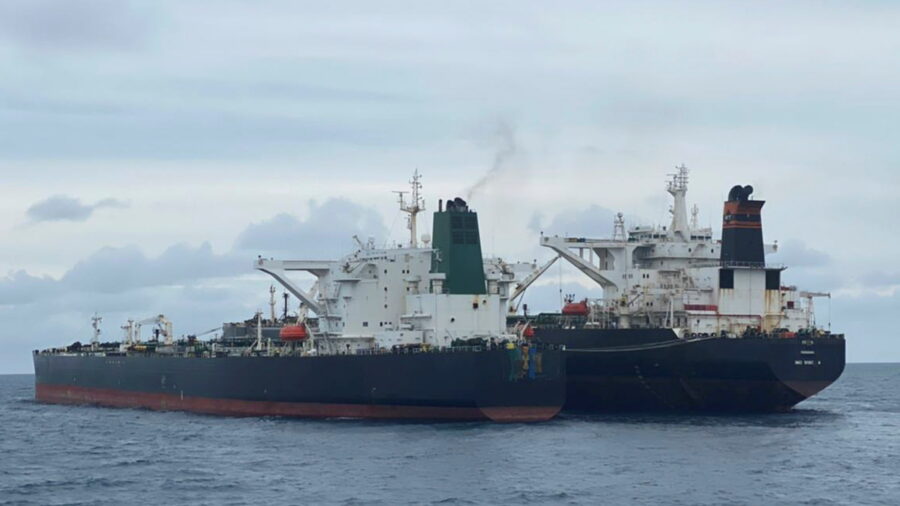 Indonesian authorities said two seized supertankers suspected of illegally transferring oil over the weekend were “caught red-handed” and are making their way to dock for further investigation.

The Iranian-flagged MT Horse and the Panamanian Freya were seized on Sunday in waters off Indonesia’s West Kalimantan province and escorted to Batam island in the country’s Riau Islands Province, according to the Indonesian coast guard.

Officials with the Indonesian coast guard caught the tankers “red-handed” in an alleged illegal ship-to-ship oil transfer while also recovering an oil spill around Freya, the receiving tanker.

A search by Reuters on the vessel’s origins concluded the MT Freya is managed by a Chinese company based in Shanghai while the MT Horse is owned by an Iranian tanker company.

The vessel’s 61 crew members were reportedly mainly of both Chinese and Iranian nationalities, who have since been detained.

The supertankers, each capable of carrying 2 million barrels of oil, are also accused of several other violations, including not displaying national flags, shutting off their identification systems, as well as anchoring illegally.

The International Maritime Organization requires vessels to use transponders for safety and transparency. Iran has previously been accused of concealing identification systems and disabling tracking systems to avoid U.S. sanctions.

Sunday’s incident comes after multiple international investigations on China, which remains the largest remaining buyer of Iranian oil. The White House warned Chinese shipping companies in 2019 not to turn off their ships’ transponders to conceal their oil export with Tehran.

In 2018, former President Donald Trump imposed sanctions on Tehran’s oil export around the world, aiming to cut it to zero, accusing the Islamic regime of supporting terrorists, building and spreading ballistic missiles, lying about developing nuclear weapons, and a litany of other transgressions.

The sanctions target the energy sector as most of Iran’s export revenue stems from oil. The country has seen its sales abroad deeply impacted after Trump withdrew the United States from the 2015 nuclear deal with world powers.

Over the past few months, MT Freya has delivered two crude oil cargoes totaling about 4 million barrels into Qingdao port on the east coast of China and northeast Yingkou port, said Emma Li, a senior crude analyst with Refinitiv.

Wisnu told Reuters on Tuesday the seizure of the ships had “nothing” to do with the U.S. sanctions.