In locked-down Lebanon, many fear hunger more than virus 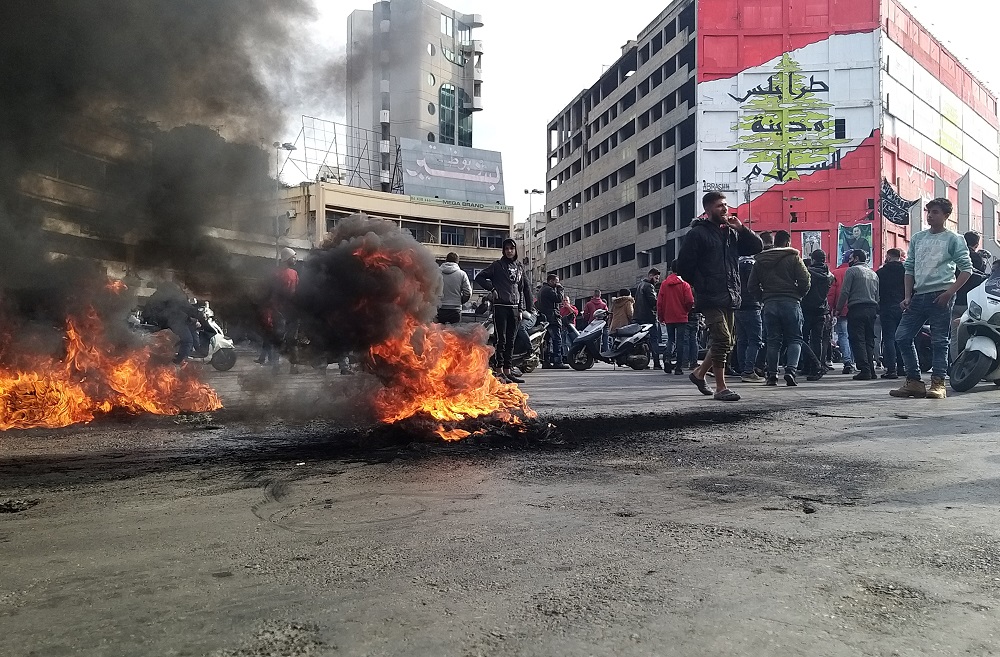 Demonstrators gather near burning tires during a protest against the l worsening economic conditions, amid the spread of the coronavirus disease (COVID-19), in Tripoli, Lebanon January 25, 2021. REUTERS/Walid Saleh NO RESALES. NO ARCHIVES
Share:

Lebanon may be under a strict pandemic lockdown to stem raging coronavirus rates, but father-of-six Omar Qarhani is still working, desperate to support his family.

“I’m not scared of corona — what scares me is being in need and poverty,” the 38-year-old told AFP, selling vegetables on the side of a road in the northern port city of Tripoli.

Lebanon has imposed a round-the-clock curfew nationwide since January 14, barred non-essential workers from leaving their homes and restricted grocery shopping to deliveries.

The country has recorded over 280,000 coronavirus cases and more than 2,400 deaths stemming from the disease since the pandemic began.

On paper, its Covid-19 restrictions are among the strictest in the world, but in reality grinding poverty is pushing many back onto the streets to eke out a living.

Standing beside his vegetable boxes in Tripoli, Qarhani said he was already barely making ends meet after he gave up his job at a flower shop to sell fresh produce.

“We need 70,000 Lebanese pounds a day to put food on the table, but this job only provides half,” he said, implying he was earning less than $8 a day at the market rate.

Security forces have set up checkpoints across the country to check Lebanese are complying with measures in force until February 8 to protect the health sector from collapse.

But many people in poorer areas have been forced to defy the rules and keep working, especially in the poverty-stricken city of Tripoli.

Tensions have risen, and dozens of protesters clashed with security forces in the city late Monday, although it was not immediately clear if the unrest was spontaneous or organised.

Tripoli was already one of the country’s poorest cities before the pandemic, and before a crippling economic crisis hit Lebanon in 2019.

Mohamed al-Beiruti, an anti-poverty activist in the city, said most of those ignoring the curfew were day labourers living from hand to mouth, earning barely $2 a day.

“If they don’t work that day, they don’t eat,” he said. “Living conditions in Tripoli are bringing popular anger to a boil. What happened last night is just a prelude.”

Half of Lebanon’s population is now poor, and almost a quarter live in extreme poverty, the United Nations says.

Around half of the workforce lives off daily wages, the labour ministry estimates.

This month, the charity Save the Children warned that “survival has become a daily mission for millions of children and their families”.

In Lebanon’s far north, 43-year-old carpenter Ismail Asaad described the situation as “catastrophic, especially for those who are self-employed or day labourers”.

The father of seven children aged from three to 19 said he had stayed at home in the region of Akkar since the pandemic restrictions started.

“Before the lockdown, we’d manage an odd job here or there, but now we can’t work at all. What are those who don’t get a monthly pay cheque supposed to do?”

Similar complaints echo across the country.

In the Broumana area in the mountains above Beirut, George, an electrician, said he had received no calls for work in two weeks.

“Every day, I think of how on earth I will be able to pay my bills,” he said.

“Prices are sky high, and orders from the supermarket to prepare lunch or dinner” are hugely expensive, he said.

Addressing Lebanon’s strict lockdown, he said “how can the state take such a decision without providing any financial aid?”

The authorities say they have started handing out monthly payments of 400,000 Lebanese pounds (around $50 at the market rate) to some 230,000 families.

But this is not enough in a country where, the caretaker social affairs minister told Lebanese media on Tuesday, only a quarter of citizens do not need financial assistance.

Among the worst-hit have been hundreds of thousands of Syrian refugees living in Lebanon.

Abdelaziz, 35, lives with his wife and three children in Beirut, where he works as a concierge.

“I haven’t earned even 1,000 pounds since the start of the lockdown,” he said, referring to the smallest Lebanese bank note now worth barely 10 US cents.

After fleeing Islamic State group jihadists, who captured his Syrian hometown of Raqa, he worries how his family will survive the coronavirus restrictions.

“We fled from Raqa when IS overran the area and destroyed our homes,” he said. “It feels like we escaped death there, just to die of hunger here.”