Protest against arrest of Putin’s critic Natalny sweep across Russia 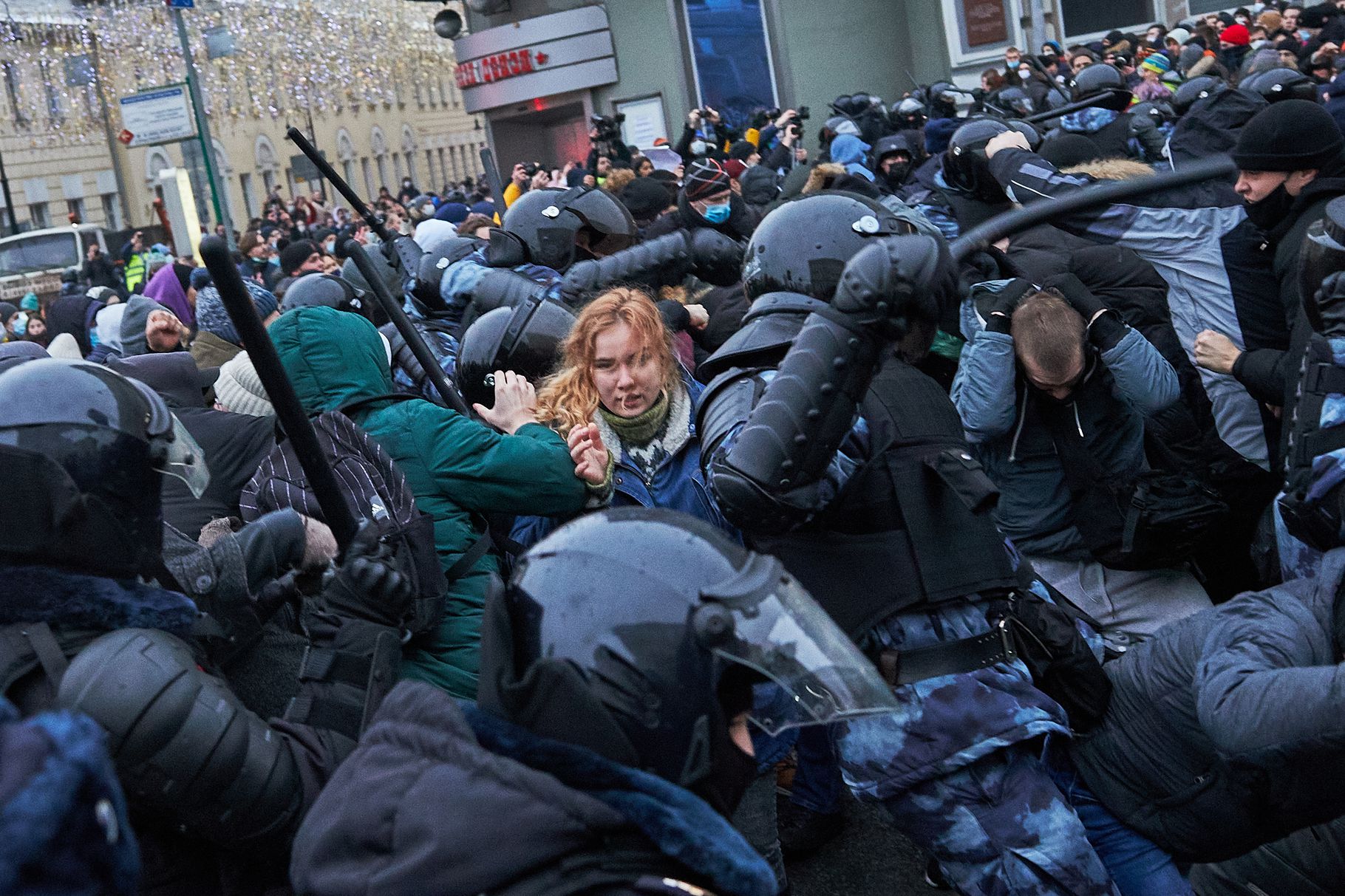 Demonstrators clash with riot police during a rally in Moscow on January 23, 2021 against the arrest of Kremlin critic Alexey Navalny
Share:

Yulia Navalnaya, the wife of the Kremlin critic Alexey Navalny, was detained in Moscow on Saturday on the sidelines of a protest held in support of her husband.

The video shows Navalnaya being stopped by police at the entrance to a metro station in central Moscow near where protesters were gathered. She is then shown being escorted to a police van.She was released from detention later on Saturday, according to a tweet from Navalny’s Anti-Corruption Foundation.

The demonstration in Moscow was one of dozens of opposition rallies held in defiance of the authorities across Russia on Saturday. According to OVD-Info, an independent site that monitors arrests, more than 2,100 people were detained during various protests in nearly 100 cities.

Navalny himself is currently held in pre-trial custody and the protesters were demanding his release. He was detained at a Moscow airport late Sunday, just moments after arriving from Germany, where he spent five months recovering from Novichok poisoning he blamed on the Russian government. The Kremlin repeatedly denied any involvement.

The demonstrations kicked off in Russia’s far east city of Vladivostok and spread to the west as the day progressed. Navalny’s supporters said Friday they were planning protest across 90 cities and videos and photos posted on social media showed crowds of people gathered in a number of cities across the country.

One video showed a small protest in the city of Yakutsk, where temperatures dropped to -53 degrees Celsius (- 63 Fahrenheit) on Saturday.

Moscow and St. Petersburg saw some of the biggest crowds. Thousands of people gathered at Pushkin square in central Moscow in the early afternoon, carrying banners and chanting “Putin is a thief” and “One for all and all for one!” Most wore face masks, because of the coronavirus epidemic.

They were met by riot police, who were trying to push them away using batons. A loud message, asking people to leave, was playing on repeat. “Dear citizens, this event is illegal. We do our best to ensure your safety. Be vigilant and, if possible, leave the illegal event.” The Russian Ministry of Internal Affairs said about 4,000 people gathered for a protest in Moscow. The statement did not make any reference to Navalny and was posted about 40 minutes before the rally was set to begin.

Scores of protesters were arrested even before the protest officially started. By the end of the day, more than 500 had been detained in Moscow alone, according to OVD-Info.

One of the protesters attending the Moscow rally, Kirill, said he was protesting because “you can’t win a fight without fighting.” Speaking to CNN at the demonstration, the 20-year old said: “I’m not proud of my country, I don’t want my government to poison people and put them in prison. I want more freedom. I want proper elections and normal government so I’m trying to stand up for my freedom here.”

Yulia Navalnaya joined the protest in Moscow, sharing a photo of herself at the rally on Instagram. A caption read “So happy you are here. Thank you!” Less than 30 minutes later, Navalnaya shared another photo of herself in what she says is a police car.

The demonstrations have not received an official government permit and the authorities have warned people not to attend them.

Several allies of Navalny have been detained this week for inciting the protests, including his spokesperson Kira Yarmysh, Anti-Corruption Foundation investigator Georgy Alburov and opposition activist Lyubov Sobol.

The Russian Ministry of Foreign affairs has accused the United States of encouraging the protests after the US Embassy in Russia posted an alert on its website advising US citizens to avoid the demonstrations.

Lots and lots of people on sidewalks of Tverskaya, leading to Pushkinskaya square and the Kremlin. This must be the biggest anti-Putin rally in years. People are enraged. pic.twitter.com/dN4bXE5fZh

In a tweet posted on Saturday, the ministry said that posting information about the rallies was “in line with Washington’s provocative policy of encouraging protests in countries whose governments are seen by US as undesirable.”

Under Russian law, an official appeal for approval of a protest has to be made to local authorities at least 10 days before the event. Navalny was only arrested less than a week ago, so the organizers had insufficient time to launch an appeal. Russian internet regulator said Thursday it was planning to fine major social networks, including Twitter, Facebook and TikTok, for “spreading information prohibited by law and aimed at attracting minors to participate in unauthorized mass public events.”

The spokesperson for the US embassy in Moscow, Rebecca Ross, accused the Russian authorities of suppressing the right to peaceful political assembly and freedom of speech. “This continues years of Russia tightening restrictions, repressive actions against civil society, independent media, political opposition,” she said in a statement on Twitter.

The European Union High Representative Josep Borrell condemned the “widespread detentions, disproportionate use of force” by Russian authorities in Saturday’s protests and said he would discuss the “next steps” with EU foreign ministers on Monday.

The UK Foreign Office said in a statement on Saturday it was “deeply concerned” by the detention of protesters. “We urge the Russian government to respect and comply with its international commitments on human rights, and release citizens detained during peaceful demonstrations,” the statement said.