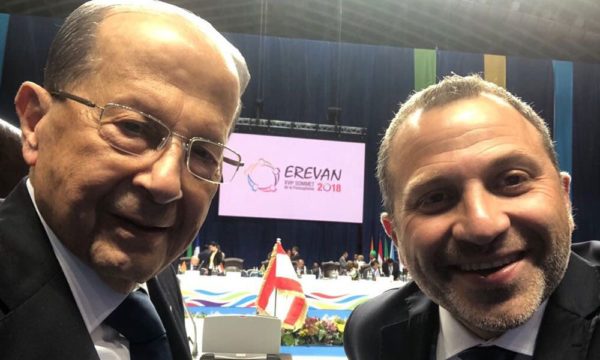 BEIRUT: Lebanese Parliament  MPs have accused Michel Aoun of  abusing the presidency by acting “as a party and not as a president entrusted with the constitution.”

On Saturday, MP Anwar Al-Khalil , a member of Speaker Nabih’s Berri’s parliamentary bloc said that Aoun’s media office’s statement on Friday “undermines the Lebanese people’s minds and destroys the hope of forming an important government. It is also a digression from obstinacy and stubbornness.”

“ Enough bickering! Support the whole country and save it from collapse,” Al-Khalil  told Aoun .

Aoun defended himself and  his son-in-law the head of the Free Patriotic Movement (FPM), MP Gebran Bassil, against the accusation of obstructing the formation of a government, which raised tension between him and Prime Minister-designate, Saad Hariri.

Another MP , Hadi Abu Al-Hassan said: “Hariri is faced with a crippling process in order to force him to resign.” He added that the president and the FPM “do not want the return of Hariri as prime minister without Bassil in the government.”

He criticized Aoun, saying: “The covenant is unconscious. It lives somewhere else, as attested to by all, and through his practices, he wants to monopolize everything.”

“The problem in the country is the non-presence of a conscious central authority that is aware of what is happening. It is absent and today, we are reaping what was sown,” he said.

Former MP Mustafa Alloush, who is also the Future Movement’s vice president, said the president’s objective was “to make Bassil afloat again and move the presidency to his son-in-law. It is not the rescue of the republic.”

Alloush said that the new government should “lend a helping hand to establishments and countries. Lebanon might be able to convince the International Monetary Fund (IMF) to have a loan, however, if that is not followed by CEDRE (Conference for Economic Development and Reform through Enterprises) and aid from the Gulf and the US, we will have increased our debt to the IMF.”

He said the other team, specifically Hezbollah, was not interested in the rescue operation. “Aoun and the FPM rely on Hezbollah to justify their stubbornness to obstruct the formation of the government, with the aim of making Bassil president.” He said Bassil was subjected to US and personal sanctions that were neither accepted by the Gulf nor internationally and “they are trying to impose a de facto government.”

On the calls to form an opposition against Aoun and his political team, Alloush said: “There is a lot of talk, but if these parties agree on the idea, they disagree on the details.”

Abdel-Sattar Al-Laz, adviser to former prime minister, Tammam Salam, told Arab News: “A meeting was held a while ago at Salam’s house. It included former heads of government and  leader of the Progressive Socialist Party, Walid Jumblatt, and addressed the possible scenarios to solve the stalemate in the country.”

Forming an opposition was difficult at the moment, Al-Laz said. “Any new opposition needs Christian and Shiite participation and cannot be limited to Sunni forces and a Druze party. There is a need for a Christian team such as the Lebanese Forces and Kataeb, and those have their personal agendas. The opposition cannot be formed of independent people. It is required to have driving forces with a real representation.”

“The ball is in the court of the Christian partner. Can they form an opposition against the president to ask for his removal or pressure him to resign? Such opposition should be headed by the Maronite Patriarch Bechara Al-Rai, and I rule out its formation since it will affect the position of the Maronite presidency. In that light, there is no hope except to wait for change in the region, otherwise, we are facing a dead end.”