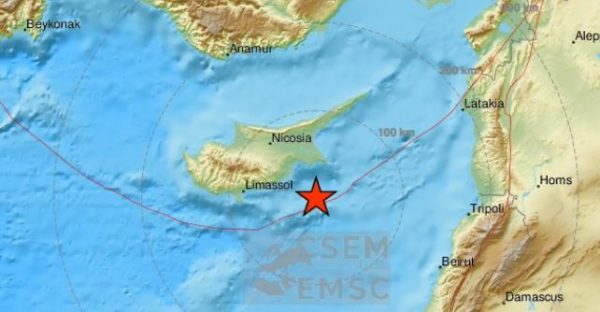 An earthquake recording a magnitude 5.0 on the Richter Scale in Cyprus was felt across the island and as far as Lebanon, Israel, Turkey and Syria.

The Cyprus Geological Survey said the earthquake measuring 5.0 on the Richter Scale, occurred at 4:27 pm local time, 18 km northeast of the southern coastal town of Larnaca, at a depth of 55 km.

The larger than usual tremor was felt across the island including the capital Nicosia with witnesses saying it lasted a “good 20 seconds”.

Witnesses said that some residents in Larnaca and Nicosia went out into the street soon after the earthquake as a precaution.

Due to the earthquake, the Parliament session voting on the Cypriot state budget was briefly suspended.

Cyprus police told the Financial Mirror there were no reports of structural damage or injuries some 40 minutes after the earthquake struck.

Reports say that another a weaker earthquake of magnitude 2.0 on the Richter scale was recorded earlier on Thursday morning, northwest of Cyprus.

Cyprus is a secondary earthquake-prone zone, but strong tremors of this magnitude are uncommon.

The biggest quake in recent years was a magnitude of 6.8 in 1996 killing two people in Paphos.