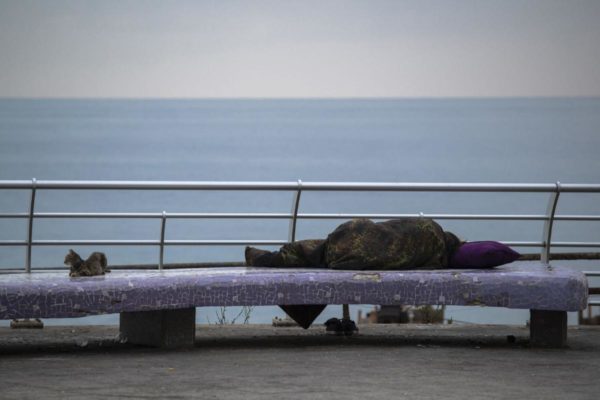 FILE – In this, July 19, 2020 file photo, a homeless woman sleeps on a bench on the Mediterranean Sea corniche in Beirut, Lebanon. The World Bank has approved a $246 million loan to Lebanon to provide emergency cash assistance to nearly 800,000 Lebanese reeling under the country’s compounded economic and health crises. The World Bank said in a statement late Tuesday, Jan. 12, 2021, that the loan would also support the development of a national social safety net in Lebanon. Hassan Ammar
Share:

The World Bank said in a statement late Tuesday the loan would also support the development of a national social safety net in Lebanon, which was struggling with a financial crisis before the pandemic struck, driving nearly half the population of the small country of 6 million into poverty. Over 1 million refugees from Syria live in Lebanon.

The economic crisis has led to a projected 19.2% decline in gross domestic product, triple-digit inflation and is pushing 1.7 million people below the poverty line. Some 22% of the population is expected to fall into extreme poverty.

International donors have been dispensing direct humanitarian assistance to Lebanon. But in the absence of major structural reforms, talks with the International Monetary Fund that began last summer have failed to produce a rescue package for the cash-strapped government.

The deepening crisis has depleted foreign reserves in the import-dependent country and sent the local currency tumbling, losing nearly 80% of its value before the dollar. The government is discussing ways to lift subsidies from some basic goods and has already increased the price of flour and bread.

Meanwhile, a surge in coronavirus infections — rates have been hovering at around 4,000 new cases a day in recent days — and a strained health care system have added to the concerns. A massive explosion last summer at the Beirut Port ravaged the city, killing over 200 people and injuring thousands.

“The consequences of these repeated shocks on the economic well-being of households is far-reaching and potentially disastrous”, said World Bank Regional Director Saroj Kumar Jha.

The significant portion of the loan — nearly $200 million — will go toward providing cash assistance to around 786,000 individuals through a pre-paid electronic card. With a turbulent exchange rate and a thriving black market, the World Bank said it will dispense the assistance in local currency, using a conversion rate for the loan funds calculated at 1.6 times the one set by the Central Bank for the U.S. dollar.

The conversion rate would be subject to change if there were major fluctuations in the currency value, the World Bank said. But the rate raised questions among activists who said converting the loan at 6,240 Lebanese pounds to the dollar — or about 40% less than the black market rate — would benefit the banks, which are short on foreign currency.

The loan also includes school fees for some 87,000 children between ages 13 and 18. It will also help Lebanon develop a social registry to determine who would need assistance in the future.

Lebanon has not had a census since 1932, when Christians were a majority. The country has a delicate sectarian balance and now the nation of 5 million is believed to be equally split between Christians, Sunnis and Shiites.

On Wednesday, the parliament’s health committee prepared a draft law to allow for importing coronavirus vaccines from Pfizer and BioNTech. The law, expected to be passed by parliament this Friday, aims to reassure international companies that they will not be responsible in case of side effects for the vaccines.

Lebanon’s health minister had said the first batch of vaccines is expected in February.