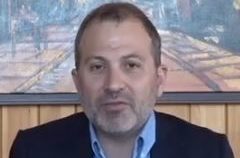 FILE PHOTO OF: FPM chief MP Gebran Bassil . In a blow to Bassil , Lebanon’s Constitutional Council on Tuesday said an electoral appeal filed by his party had not been upheld. Bassil wanted the elections postponed till May and wanted to limit the voting by the diaspora to 6 members of the parliament
Share:

Politicians have been at loggerheads over the shape of a new administration since the last one quit in the aftermath of the Aug. 4 Beirut port explosion, leaving Lebanon rudderless as it sinks deeper into economic crisis.

Hariri was named premier for a fourth time in October promising to form a cabinet of specialists to enact reforms necessary to unlock foreign aid.

But Bassi said in a televised speech his movement would not join the cabinet as long as Hariri insisted on choosing all ministers.

“We don’t entrust Hariri alone with reform in Lebanon,” Bassil said. “In short we don’t want to take part in this government.”

After Bassil’s speech, Hariri’s Future party said it did not want to be dragged into political bickering and that the government line-up was ready and waiting to shoulder its duties.

“It will be a government that will take up the necessary reforms according to the French initiative and not according to sectarian and racist ‘Bassil-like’ considerations,” a statement by the party said.

Lebanon’s sectarian governing system requires officials to be chosen from across the religious spectrum, typically giving sectarian parties an effective veto over forming a cabinet.

Bassil an ally of the Iran-backed Shi’ite Muslim militant group Hezbollah, Lebanon’s heavily armed militia , was placed under sanctions in November by the United States over corruption allegations

Bassil claims Hariri did not appear to be serious about forming a government: “Every time he meets the president he takes a different line-up with him,” Bassil said. “Someone who does that is serious and wants to form a government? Or is wasting time?”

Progressive Socialist party leader Walid Jumblatt accused Hezbollah of being behind Bassil and Aoun in rejecting Hariri’s cabinet lineup . For this reason he urged Hariri not to waste anymore time and quit the process of Government formation because Hezbollah will not allow him to implement the reforms needed . He suggested that Hariri should let Hezbollah pick its own PM just like it did before , stressing that Lebanon has effectively become an Iranian missile venue

He also advise him against wasting any more time by meeting with president Michel Aoun and Patriarch Rai describing such efforts as futile.

“Once again, I call on Hariri to step down and let the Hezbollah-led camp appoint their desired PM whoever that may be , it will be better for everyone. He made the statement Thursday on MTV’s show Sar El Wa2et.

“Let the resistance team, that is the Free Patriotic Movement (of Aoun), stay at the forefront and behind it Hezbollah. Nothing is left (in Lebanon). We have become a missile venue,” said Jumblatt, referring to the latest statements of an Iranian general about Lebanon.

“ My problem lies with Aoun and those standing behind him. We have to confirm Lebanon’s principles of diversity, borders and truces. We are not a battlefield for other countries , he added, in reference to Iran.

Jumblatt said that Bassil is insisting on getting the blocking third in the new cabinet in case anything happens to the President, whose term expires in 2022

Lebanon is grappling with a deep economic and financial crisis, its worst since the 1975-1990 civil war, that has hammered the currency, spread poverty and prompted a sovereign debt default.