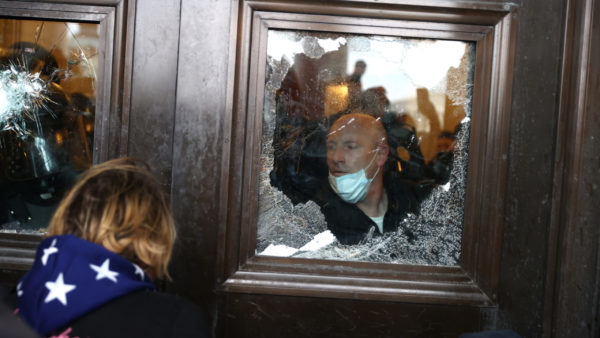 This is urgent,” Pelosi said. “This is emergency of the highest magnitude.”

There have been discussions among some members of Donald Trump’s Cabinet and his allies over invoking the 25th Amendment, a potential vehicle for removing the president from office, multiple sources with direct knowledge of the discussions told ABC News.

It’s unclear how extensive these conversations have been or whether Vice President Mike Pence is supportive of such action. Many were horrified by Wednesday’s violence at the Capitol as well as Trump’s apparent lack of urgency in marshaling resources to stop the mob, the sources said.

Rep. Adam Kinzinger, R-Ill., on Thursday became the first Republican to publicly call for the invocation of the 25th Amendment to remove Trump from office.

The 25th Amendment, which was ratified in 1967 in the wake of President John F. Kennedy’s assassination in 1963, lays out the procedures for replacing the president in the event of death, removal, resignation or incapacitation.

“The president not only abdicated his duty to protect the American people and the people’s house, he invoked and inflamed passions that gave fuel to the insurrection we saw here,” Kinzinger said in a video posted to Twitter.“When pressed to move and denounce the violence he barely did so, while of course victimizing himself … all indications are that the president has become unmoored, not just from his duty, or even his health, but from reality itself.”

“It is for this reason that I call for the vice president and members of the cabinet to ensure that the next few weeks are safe for the American people, and that we have a sane captain of the ship,” Kinzinger said.

John Kelly, Trump’s former chief of staff, told CNN on Thursday that if he were still in the Cabinet, he’d vote to invoke the 25th Amendment.

While Kelly said he thinks invoking the 25th Amendment to remove Trump is a long shot, he believes the Cabinet should meet and discuss it.

“The behavior yesterday, and in the weeks and months before that, have just been outrageous from the president,” Kelly said. “And what happened on Capitol Hill yesterday is a direct result of his poisoning the minds of people with the lies and the frauds.”

Democrats are echoing those calls.

House Speaker Nancy Pelosi on Thursday urged Pence to invoke the 25th Amendment to remove Trump from office for his “seditious acts.”

“We’ll review what our options are in terms of the 25th Amendment,” she said.

“If the vice president and Cabinet do not act, the Congress may be prepared to move forward with impeachment,” Pelosi said. “If he wants to be unique and be doubly impeached, that’s kind of up to him and his Cabinet as to whether he should stay in office.”

The House speaker called the president “a very dangerous person who should not continue in office.”

“This is urgent,” she added. “This is emergency of the highest magnitude.”

Senate Democratic Leader Chuck Schumer said in a statement Thursday, “This president should not hold office one day longer.”

“The quickest and most effective way — it can be done today — to remove this president from office would be for the Vice President to immediately invoke the 25th amendment,” he said. “If the Vice President and the Cabinet refuse to stand up, Congress should reconvene to impeach the president.”

Sen. Chris Coons, D-Del., told “GMA3: What You Need to Know” on Thursday: “If we’re not going to use the 25th Amendment in this moment then I’m not clear what it’s really for.”

“It should be abundantly clear to leaders in the Republican Party that this president, who they have made excuses for, who they’ve coddled … the way that he has conducted himself has slowly and gradually built to what happened yesterday,” Coons said. “Removing Donald Trump as president is urgent.”

Since the election in November, Coons continued, Trump hasn’t been dealing with the pandemic. … He’s been tweeting and golfing and spinning up conspiracy theories. This man does not deserve to be president of the United States anymore.”

Rep. Seth Moulton, D-Mass., tweeted Wednesday, “Trump is directly responsible for this insurrection and violence. He needs to be removed from office immediately. It is the Constitutional responsibility of Vice President Pence and the cabinet to exercise the power granted them by the 25th amendment.”

Trump is directly responsible for this insurrection and violence. He needs to be removed from office immediately. It is the Constitutional responsibility of Vice President Pence and the cabinet to exercise the power granted them by the 25th amendment.

Rep. Ilhan Omar, D-Minn., announced Wednesday that she was drawing up articles of impeachment, tweeting: “We can’t allow him to remain in office, it’s a matter of preserving our Republic and we need to fulfill our oath.”

Other lawmakers also called for Trump’s removal from office.

Meanwhile, President-elect Joe Biden and Vice President-elect Kamala Harris “are focused on their duty — preparing to take office on January 20th — and will leave it to Vice President Pence, the Cabinet and the Congress to act as they see fit,” Biden transition spokesman Andrew Bates said in a statement Thursday.

Bates added: “Trump must stop blocking cooperation with the transition that could harm the readiness of the United States government to overcome the pandemic and the other crises he has worsened.”