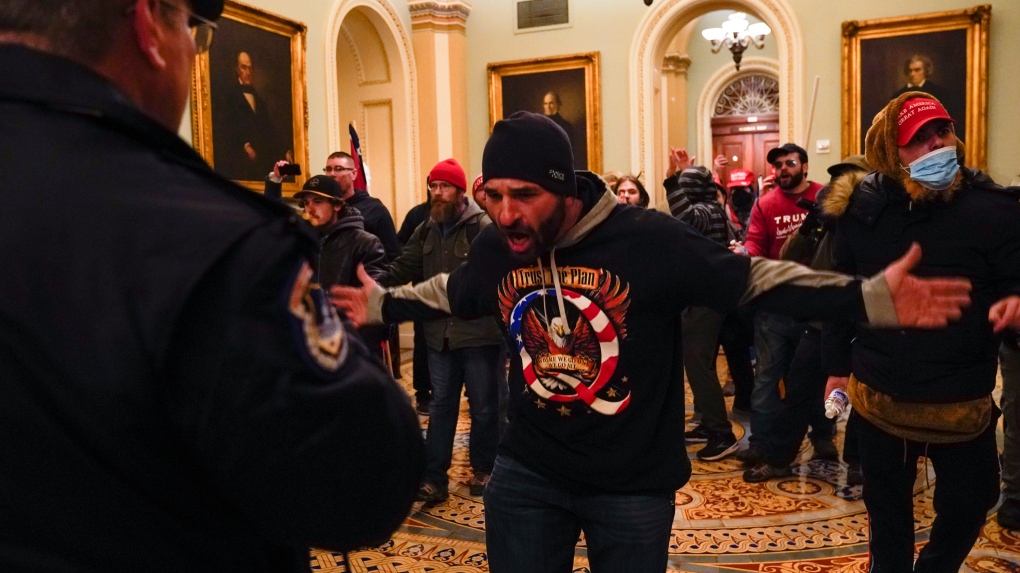 Pro Trump rioters inside the US Capitol . Utah Republican Senator Mitt Romney angrily accused Donald Trump of inciting “insurrection” against the United States government at the US Capitol on Wednesday.
Share:

Utah Republican Senator Mitt Romney angrily accused Donald Trump of inciting “insurrection” against the United States government at the US Capitol on Wednesday.

“This is what the president has caused today, this insurrection,” Mr Romney told the New York Times’ Jonathan Martin as throngs of pro-Trump rioters stormed the Capitol.

Congress had been in the process of certifying the 2020 election results and President-elect Joe Biden’s victory when the rioters broke through barricades around the Capitol grounds in DC.

Lawmakers and staff have been evacuated from the Capitol after initially being told to “hide or seek cover” and “remain quiet”.

Several national reporters inside the Capitol on Wednesday reported overhearing US Capitol Police saying “shots fired” over the radio.

At least one woman was reportedly shot outside the House chamber, according to reports. She was carried out of the building on a stretcher in critical condition.

Some rioters even made it inside the House chamber, with one man taking the dais and declaring, “Trump won that election.”

At least one rioter made his way into Speaker Nancy Pelosi’s office, taking pictures and issuing an apparent threat about the election results.

“We will not back down,” the rioter wrote in red Sharpie in all capital letters on a manilla folder.

Scores of other Republican lawmakers have denounced the pro-Trump rioters storming the Capitol, with at least one military veteran in Congress comparing the scene in Washington on Wednesday to his time in the Middle East in the 2000s.

“I haven’t seen anything like this since I deployed to Iraq in 2007,” said GOP Congressman Mike Gallagher of Wisconsin.

Even senators who have said they will support Mr Trump and congressional Republicans’ last-ditch efforts to toss out the Electoral College votes in five states, which would pave the way for him to remain in office for four more years, urged the rioters to clear the Capitol area.

“Please, if you are in or around the Capitol, respect law enforcement and peacefully disperse,” Senator Ron Johnson of Wisconsin tweeted on Wednesday amid the breach at the Capitol.

Other senators and House members took to Twitter to notify Americans that they and their staffs were safe.

“My staff and I are safe. The violence at the Capitol needs to end now. The lives of countless workers — journalists, staff, and Capitol Police are being put at risk by this attack on our democracy,” tweeted Ohio Democratic Senator Sherrod Brown.

GOP Senator Tim Scott of South Carolina condemned Wednesday’s developments wholesale and said he and his staff were safe.

“The violence occurring at the United States Capitol right now is simply unacceptable, and I fully condemn it. Team Scott is safe. God bless the U.S. Capitol Police and U.S. Secret Service for protecting us,” Mr Scott tweeted.

“I am disappointed. I am sad. This is not what our country should look like,” Mr McCarthy said.

Scores of lawmakers have pleaded with the president to issue a statement calling for peace and urging rioters to vacate the Capitol.

One of those was GOP Congressman Chip Roy of Texas, who has opposed Mr Trump and other Republicans’ attempts to toss out the Electoral College results.

“Mr. President – get to a microphone immediately and establish calm and order. Now. And work with Capitol Police to secure the Capitol. It’s the last thing you’ll do that matters as President,” Mr Roy said.

In a tweet, Mr Trump did not tell rioters to stand down, but instead asked that they remain “peaceful” in their confrontation with the USCP and other members of law enforcement.

The tweet came more than an hour after rioters breached the US Capitol and first started to display violence against police officers.

About 45 minutes later, Mr Trump published a second tweet, again declining to tell rioters to clear away from the Capitol complex.

“I am asking for everyone at the U.S. Capitol to remain peaceful. No violence! Remember, WE are the Party of Law & Order – respect the Law and our great men and women in Blue. Thank you!” the president tweeted.

The president has dispatched the National Guard to the Capitol.